BLOG: How the lamina cribrosa changes with glaucoma – part 2

Last month we discussed enhanced depth imaging and its ability to image the lamina cribrosa, specifically in patients with glaucoma. This month we’ll get into a little more about what the recent literature is saying about lamina cribrosa imaging and how we can adapt it into our practice.

Some of the things we learned last month were: the lamina cribrosa (LC) is thinner and has a more posteriorly-displaced curve in patients with glaucoma. 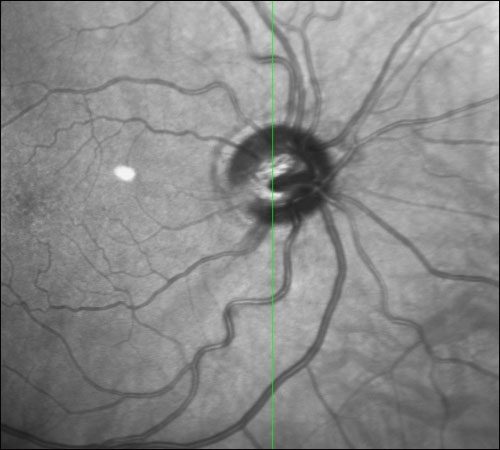 Infrared image shows a Drance’s heme at the inferior-temporal aspect of the disc and a RNFL wedge defect. 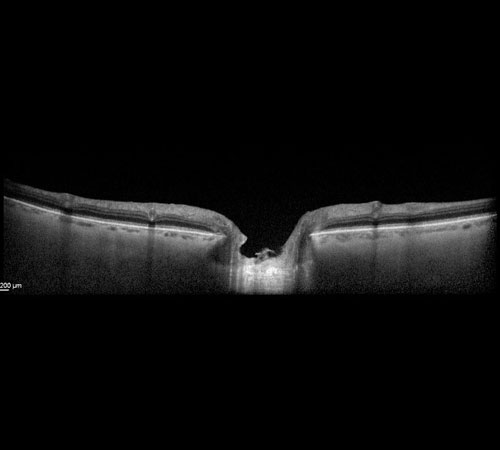 Try to determine the posterior face of the LC.

Take a look at the infrared OCT in the first figure. It shows a Drance’s heme at the inferior-temporal aspect of the disc and a retinal nerve fiber layer (RNFL) wedge defect associated with that.

Turning our attention to the OCT (the left side of the OCT represents the inferior part of the disc), I wanted to see if I could determine if the LC was thin in this patient and, specifically, if it was thinner inferiorly vs. superiorly. It’s easy to identify the clump of a blood vessel in the floor of the cup, and then you can see some pre-laminar tissue directly beneath the vessel, and then the hyper-reflective surface of the anterior face of the LC. But I had a very difficult time determining where the LC ended; determining the posterior face of the LC. Go ahead, give it a try.

And this was not the only patient where it was difficult; in fact, most of my patients’ LCs were harder to visualize and even harder to determine the full thickness. Incidentally, this EDI OCT is far from useless. We see that there is dramatic undermining of the rim tissue in the inferior disc, a finding that, frankly, surprised me how detailed it was, given that it’s so far posterior.

But this is the strength of EDI: deep, posterior imaging. We often think about it with choroidal changes, but we should use it for our glaucoma patients, as well. However, if we can’t accurately and consistently determine LC thickness with EDI, what can we do?

LC shape/curve. As discussed last month, it has been show many times over that the LC has focal areas of posterior displacement. In particular, the areas that are most posteriorly-displaced are directly under the areas of the rim that are the most damaged. The thinning and compression of the LC causes ganglion cell damage by damaging axonal transport and by mechanically compressing the capillaries designed to feed the ganglion cell axons.

So, glaucoma patients, especially normal-tension glaucoma patients, should show signs of “U”- or “W”-shaped LCs when imaged with EDI OCT. Indeed, I did find examples of that, but far too often it was difficult to make out any obvious “W” shape. And even if I did, the findings would not provide a quantitative measure of LC shape.

There are some research papers studying LC curvature index, but this involves the use of swept-source OCT and some equations using data that the commercially available EDI OCTs just can’t provide. So, if the LC thickness and curvature are out, what should we calculate? 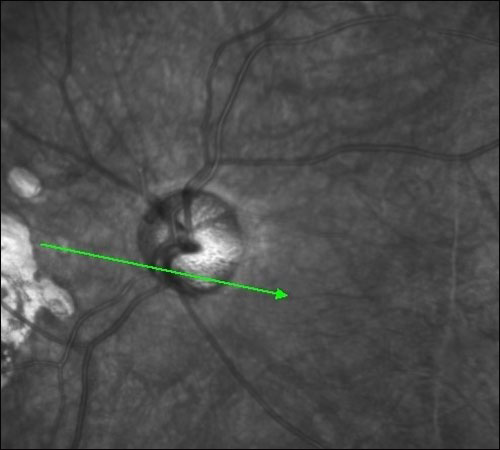 Glaucoma patients, especially normal-tension, should show signs of “U”- or “W”-shaped LCs. 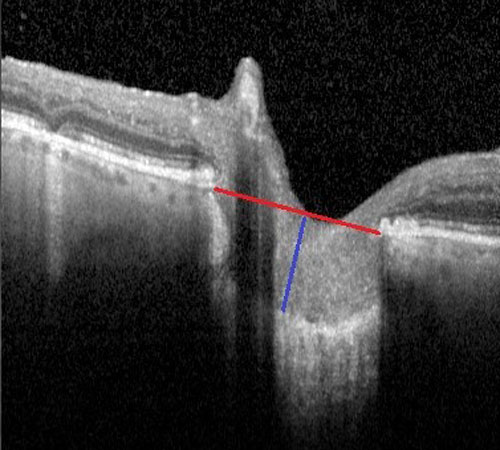 Many studies have shown that LCD is greater in patients with glaucoma and that the LCD is greatest in the superior quadrant of the LC face (Furlanetto). And this is a quantifiable number that we could measure and re-measure in follow-up exams. As far as I can tell, the main commercially available SD-OCTs do not yet measure LCD in their glaucoma software. But they are incorporating measurements like minimum rim width using BMO points, and I would imagine LCD would not be far behind.

One caveat is how choroidal thickness could affect LCD. Choroidal thickness is known to show diurnal variations, and if you look at the BMO line in the second figures, you might imagine that if this patient’s choroid suddenly swelled, then it would raise the red line higher and, thus (artificially?), increase the LCD.

These are things of which we will have to be wary and check to see how reproducible and reliable the data is after years of follow-up. But LCD could be a welcome addition to the familiar RNFL circle scan for the management of our glaucoma patients.