View Issue
Disclosures: Chee reports no relevant financial disclosures. Lighthizer reports he is on the scientific advisory board for ZeaVision/EyePromise and is a consultant for Diopsys.

Patient with diabetes has reduced vision

A 63-year-old Native American female was referred to the electrodiagnostics clinic for an OCT, ERG and visual-evoked potential, if needed, due to the patient’s unexplained decreased vision. She was best corrected to 20/50 OD, OS.

Upon slit lamp examination, the anterior segment was unremarkable in both eyes. IOP measured with Goldmann was 16 mm Hg OD and 17 mm Hg OS. There were no media opacities present in the lens or vitreous correlating to explain the decrease in vision.

Fundus photos and binocular indirect ophthalmoscopy suggested some small dot/blot hemorrhages and microaneurysms but there were no cotton-wool spots, intraretinal microvascular abnormality (IRMA), clinically significant macular edema (CSME), exudate or venous beading present. Overall, the fundus appeared to be mild nonproliferative diabetic retinopathy (NPDR), which did not correlate to the decreased vision. The peripheral retina was flat, with no holes, tears or breaks 360 degrees in both eyes.

No CSME or cystoid macular edema (CME) and no disruption of the macula were observed in OCT images. Next, the pattern ERG was done. This involves a pattern stimulus on a computer screen that tests central retinal functioning. In normal findings, three smooth and robust sinusoidal waves are present. In our patient, the three waves were small in magnitude, suggesting some dysfunction in the ganglion cells and overall central macula. To continue with the electrodiagnostic testing, flash flicker ERG (ffERG) was performed to measure overall retinal function. With the fixed-luminance and the multi-luminance ffERG, the magnitude was low, and the responses were scattered. In normal ffERG fixed luminance, a large magnitude with consistent responses are shown. The ffERG testing suggested overall dysfunction of the retina of our patient although no structural abnormalities were noted on the OCT or fundus imaging. 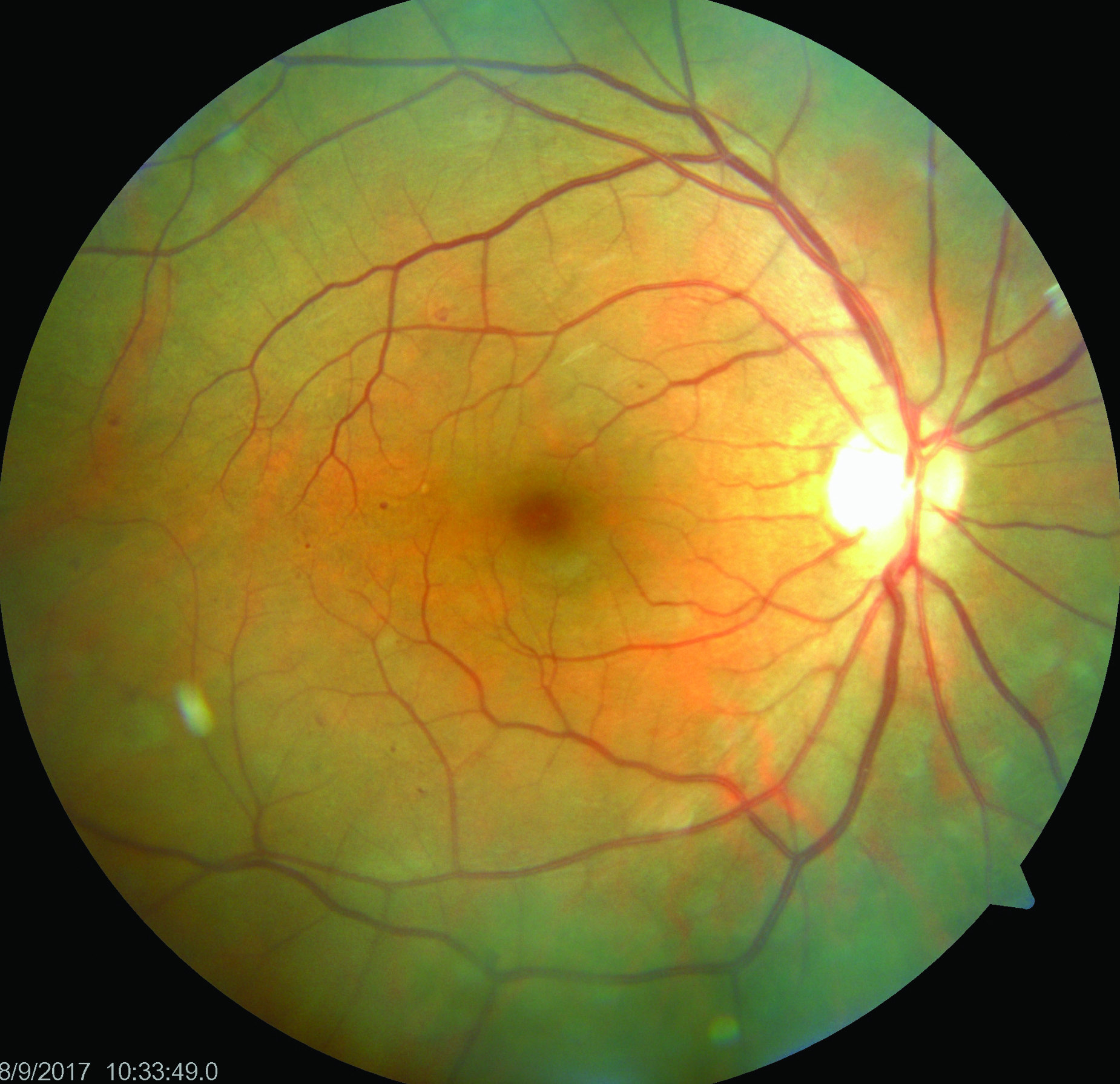 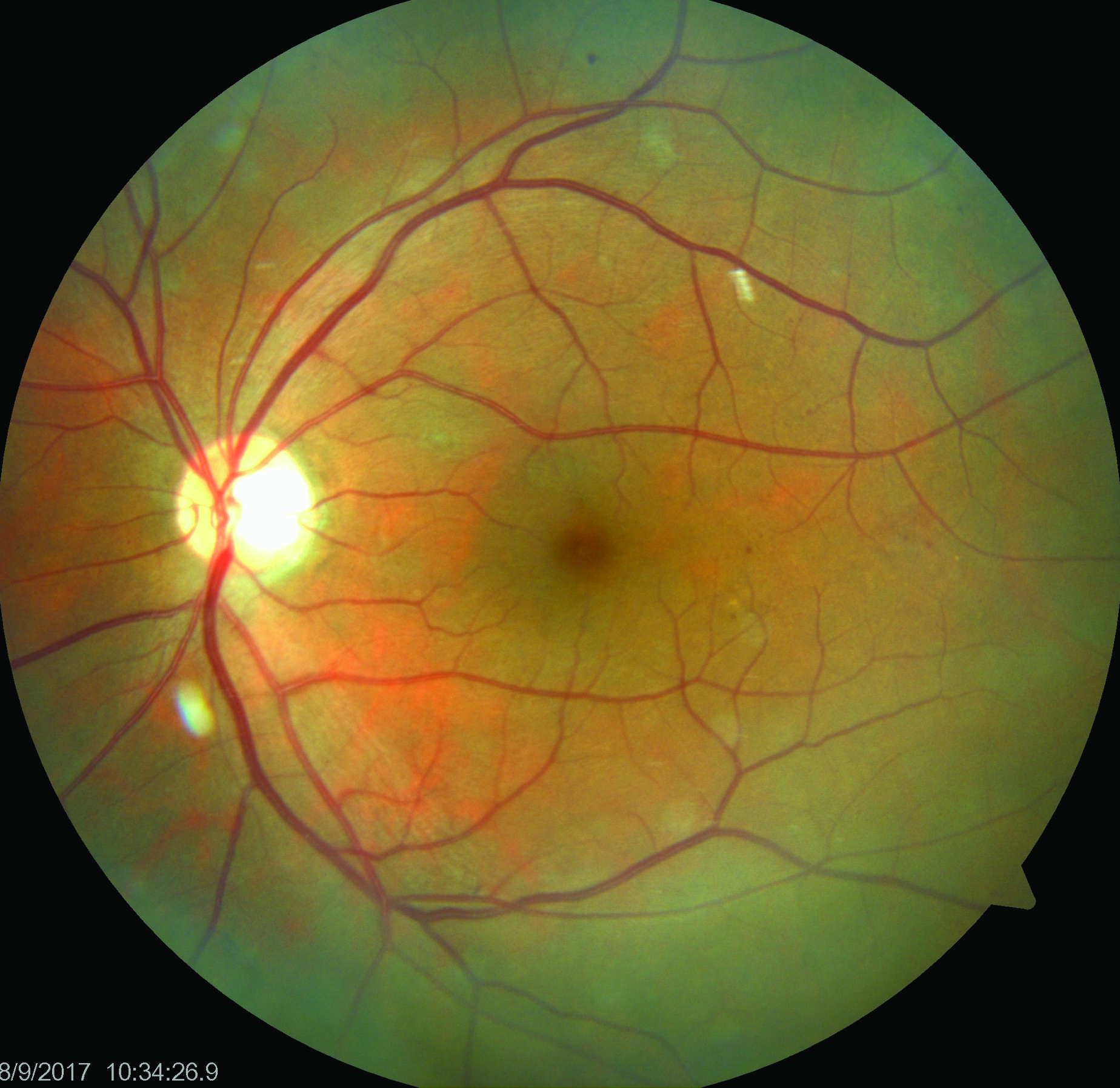 Right (left) and left (right) eye fundus photos indicate mild NPDR. One could argue that the fundus appearance is “featureless,” a characteristic of the vasculopathy that indicates diabetic retinopathy. 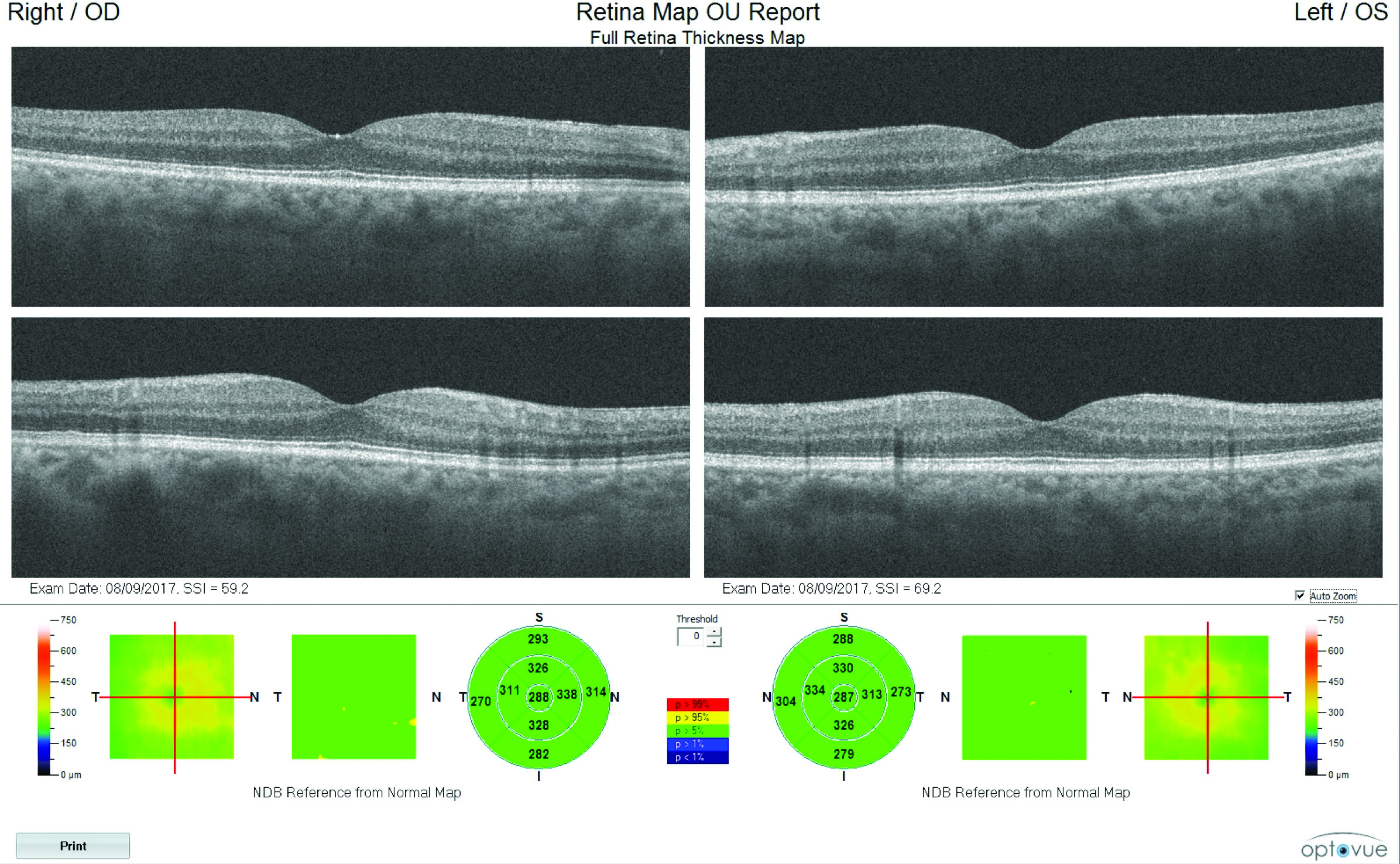 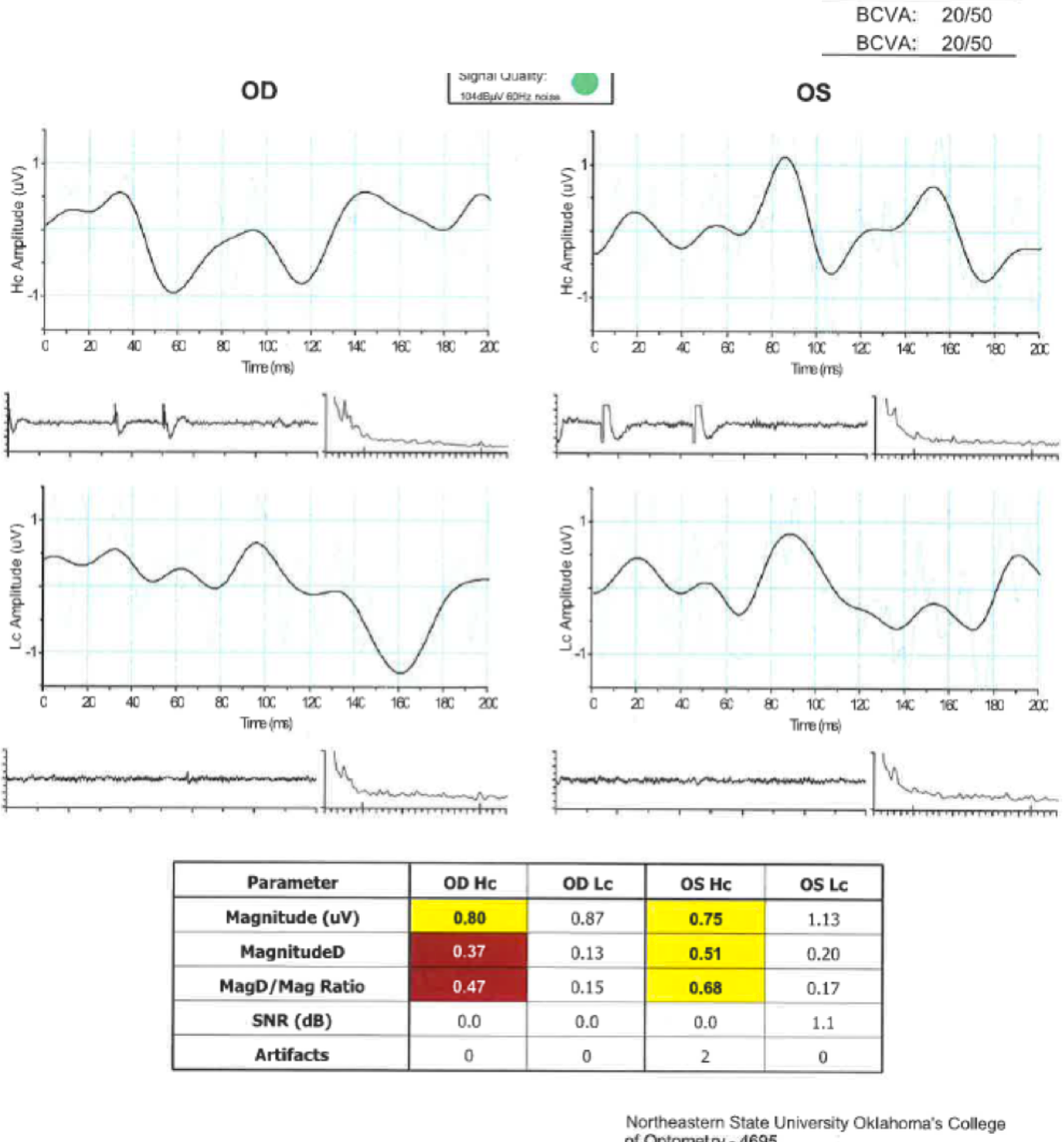 Differentials considered at this point were diabetes and diabetic retinopathy that was worse in nature than the structural tests indicated. Other options considered were decreased vision secondary to dry eye, although that seemed unlikely due to the lack of significant superficial punctate keratitis. Neurological etiologies such as intracranial abnormalities, ischemic optic neuropathy or other optic neuropathies were considered but ruled out based on the relatively normal visual-evoked potential (VEP) and absence of neurologic visual field defects on the visual field.

The patient was diagnosed with mild NPDR with a suspicion that the retinopathy was worse than the fundus appearance due to the significantly abnormal ERGs. The ffERG, which tests the functionality of the overall outer retina, had magnitude values that were reduced in both eyes, with the right reduced more so than the left. Phase values were also reduced and showed a scattering or inconsistency of responses, which is characteristic of an unhealthy and potentially ischemic retina. The pERG, which tests the functionality of the macula at the inner retinal level, showed reduced magnitude values and ratio values, indicating dysfunction at the macular level, which is consistent with the patient’s reduced visual acuity.

Because of the retinal dysfunction seen on the multiple ERGs and the fact that we ruled out neurologic etiologies, we put the patient on ZeaVision’s EyePromise Diabetic Vitamin Supplement (DVS), educated her on proper blood sugar and blood pressure control and followed up 6 months later. At the follow-up exam, an improvement was seen in her ERG. Subjectively, the patient noticed a difference in her vision, and objectively her visual acuity was 20/30- OD, OS. 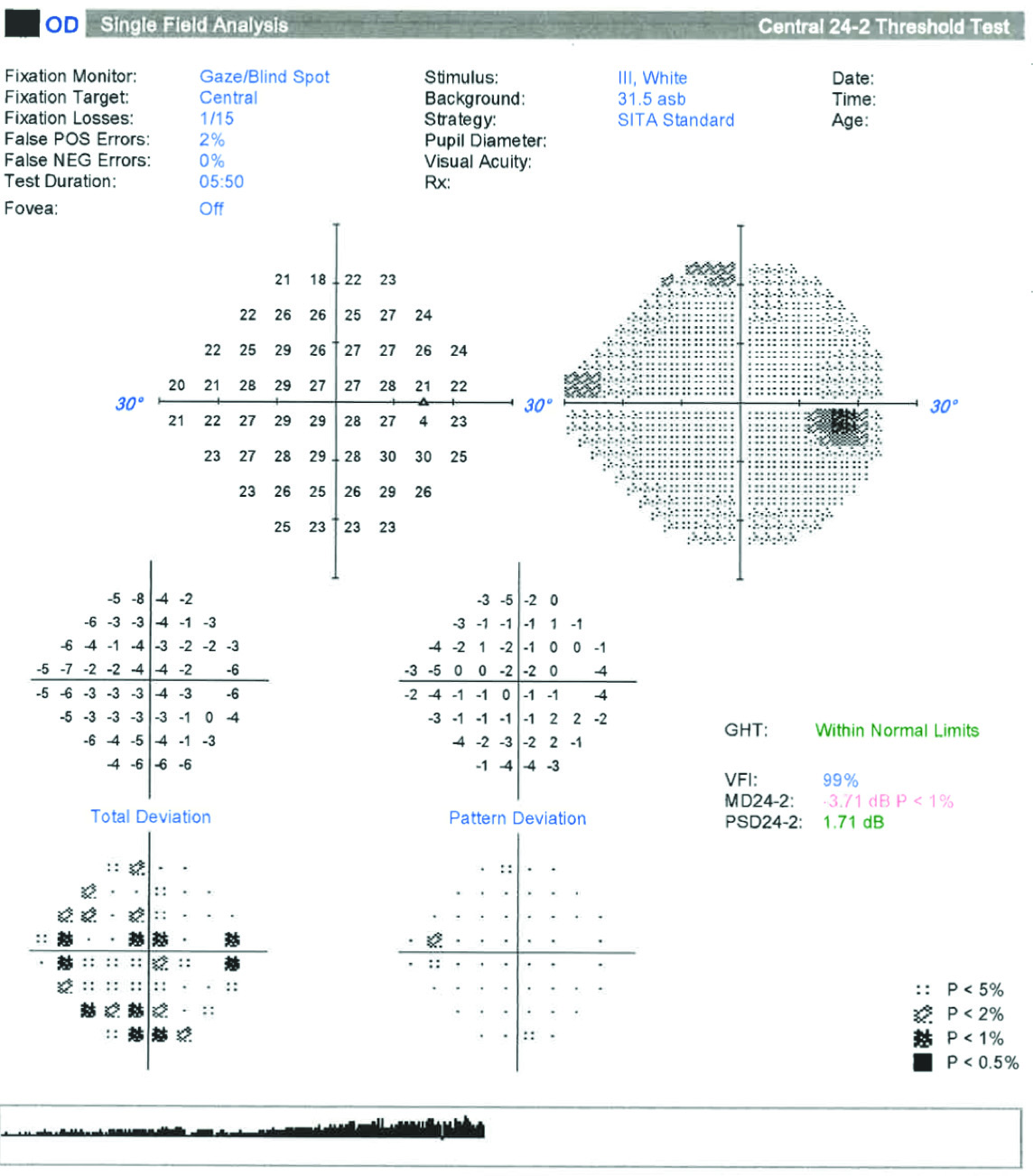 Visual field of the right eye showing overall reduction of the mean deviation, but no neurological visual field defects. 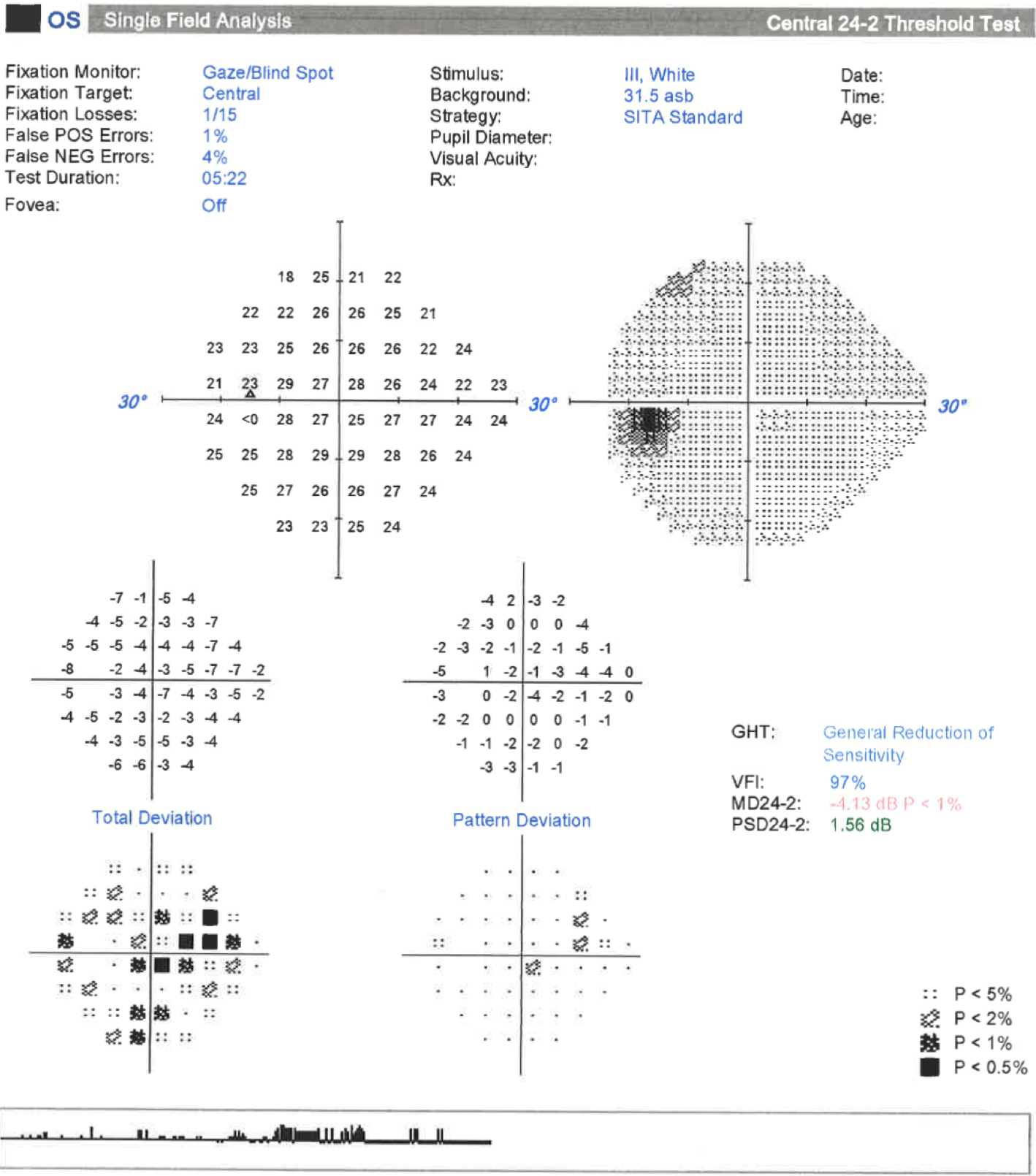 Visual field of the left eye showing overall reduction of the mean deviation, but no neurological visual field defects. 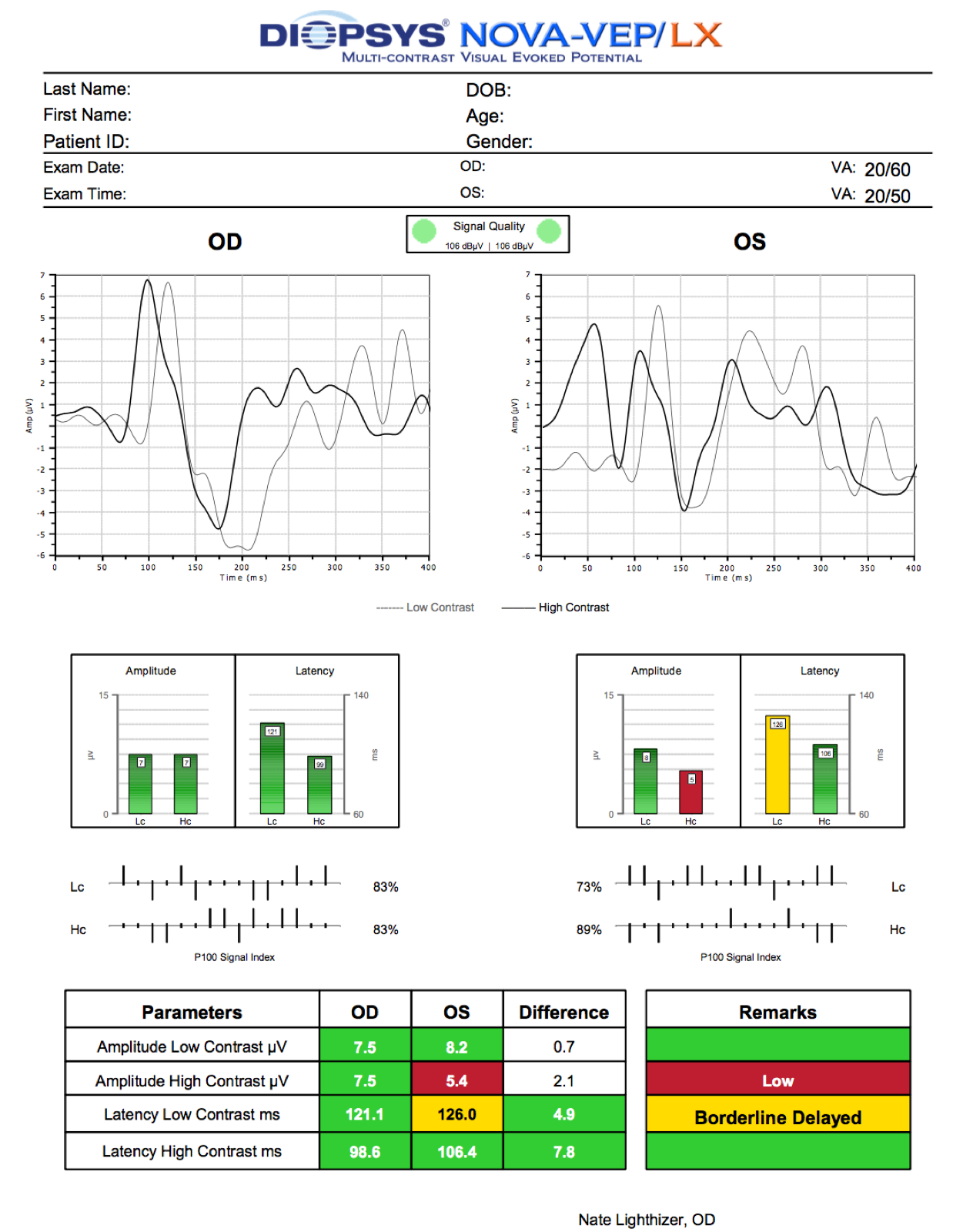 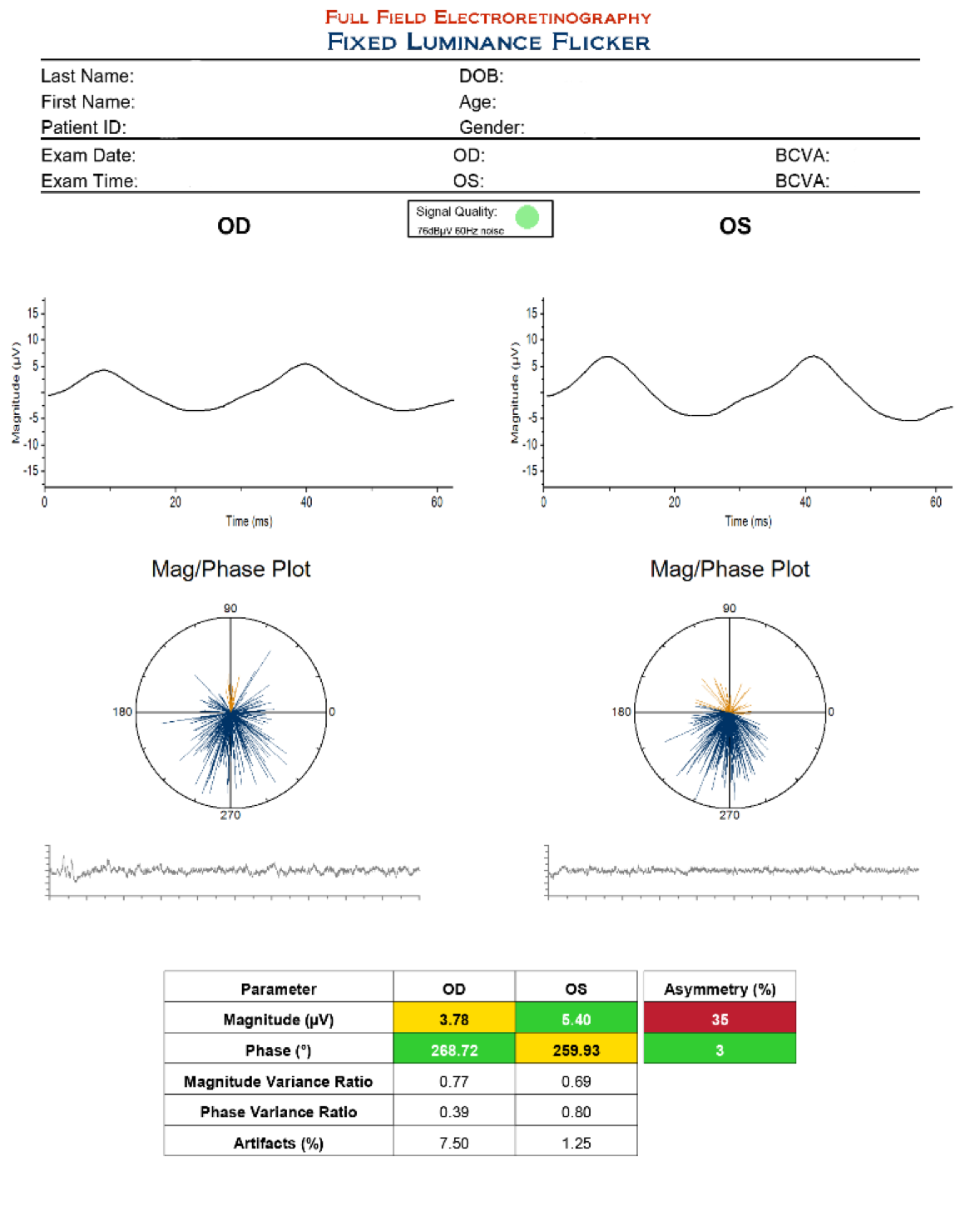 This ffERG with fixed luminance shows reduced magnitude values in both eyes, with the right worse than the left. The left eye has a low normal value (normal values are greater than 5.1). The mag/phase plot shows inconsistent scattered responses over all four quadrants (normal responses should be tightly packed together, showing good consistency in the bottom right quadrant).

Diabetes mellitus is a chronic metabolic disease characterized by hyperglycemia. There are two main types of diabetes: type 1 and type 2. Type 1 occurs because there is a deficiency in insulin production as a result of pancreatic B-cell damage, whereas type 2 is the result of insulin resistance and eventually some insulin deficiency. The age of onset of type 1 diabetes tends to be in childhood but it can manifest at any age, and patients are dependent on insulin. Type 2 diabetes usually occurs during middle age and can be treated with diet and exercise. Oral medication and even insulin may be used to treat type 2 diabetes. Despite these differences in pathogenesis, both types can result in vascular and nerve impairment.

In patients with diabetes, accelerated apoptosis of the retinal capillary cells precedes the histological characteristic changes of diabetic retinopathy. The accelerated death and renewal of these cells results in a vicious self-propagating cycle. Oxidative stress is one of the main factors that contribute to diabetic retinopathy, which is made worse from the decreased uptake of antioxidants such as lutein and zeaxanthin in the retina of diabetics. Poorly controlled diabetes can lead to the complication of diabetic retinopathy, which is one of the leading causes of preventable blindness among working-age adults. It is a complication that can occur in either diabetes mellitus type 1 or 2 due to damage to the retinal vasculature that weakens the cell walls, resulting in bleeding and ischemia. NPDR is the earlier stage of the disease and is characterized by cotton-wool spots, dot/blot hemes, venous beading or microaneurysms. This can develop into proliferative diabetic retinopathy, where neovascularization can lead to vitreous hemorrhages and even result in a tractional retinal detachment.

According to the International Society for Clinical Electrophysiology of Vision, there are five different surveys for the standard ERG examination. Three tests involve dark adaptation: scotopic ERG, where the stimulus is a weak flash targeting the rods; a massive ERG with a strong stimulus to target the photoreceptors and bipolar cells; and oscillatory potentials that look at the middle retinal layer and vascular function. The two tests that include light adaptation are photopic ERG and ffERG, which both look at the functionality of the cones, but the former also includes bipolar cells. The latency is the time measured between the start of the stimulus and the beginning of the response whereas the implicit time is expressed in milliseconds and is measured between the start of the stimulus and the peak of the response. Amplitude is the voltage of the wave.

Yamamoto and colleagues used ffERG to show that type S cones are more susceptible to hypoxic damage in diabetic patients with or without retinopathy. Similarly, other studies have shown that in the hypoxic environment of diabetic patients there is a reduction of the retinal vessel vasodilator capacity in response to a flicker stimulation during neurovascular coupling. Neurovascular coupling refers to the relationship between neurons and their vascular supply in which they receive their energy to function. 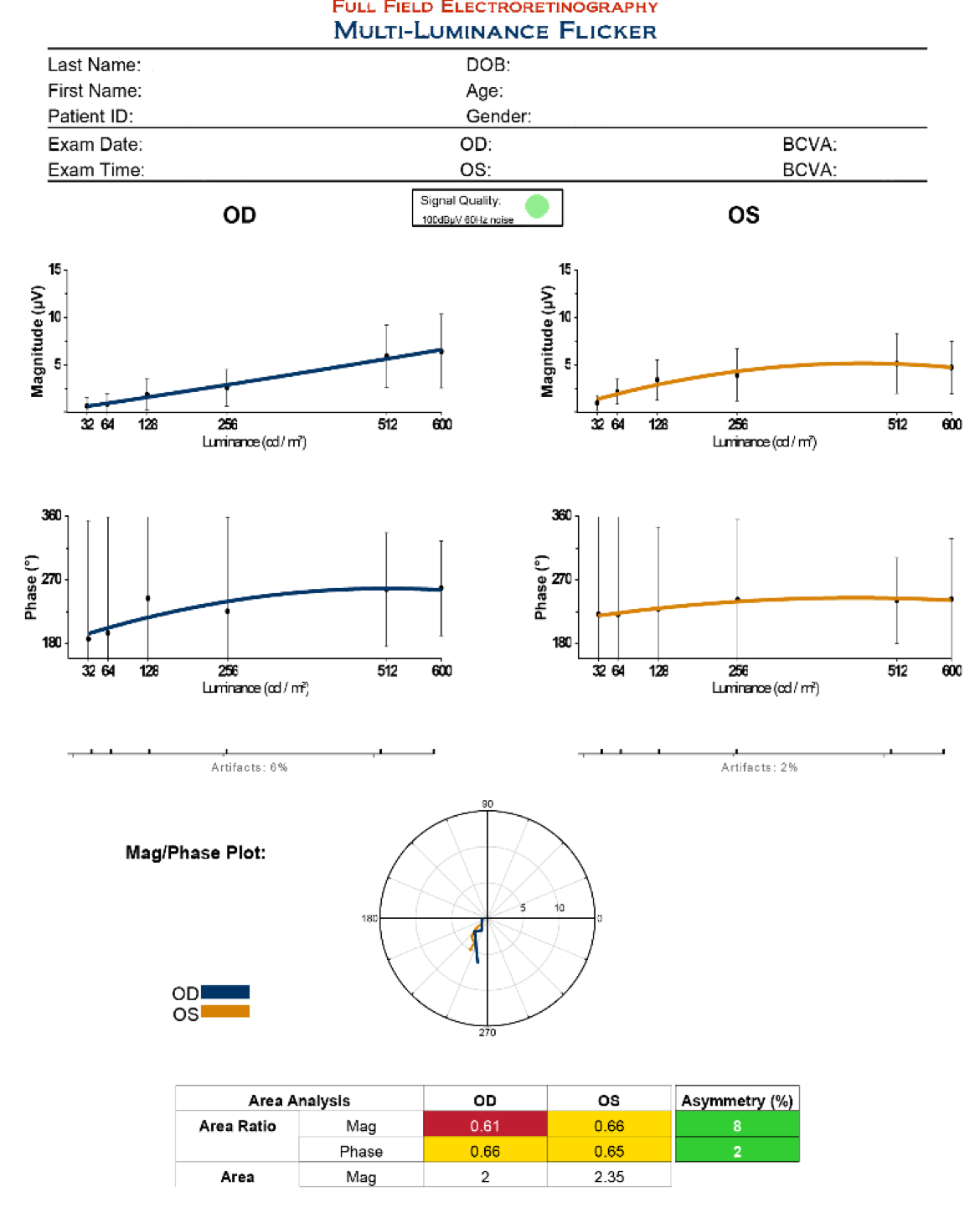 This ffERG with multi-luminance shows a reduced area under the curves for both magnitude and phase in both eyes. Area ratios (normal values 1.0 and higher) show reduced values as well in both eyes. 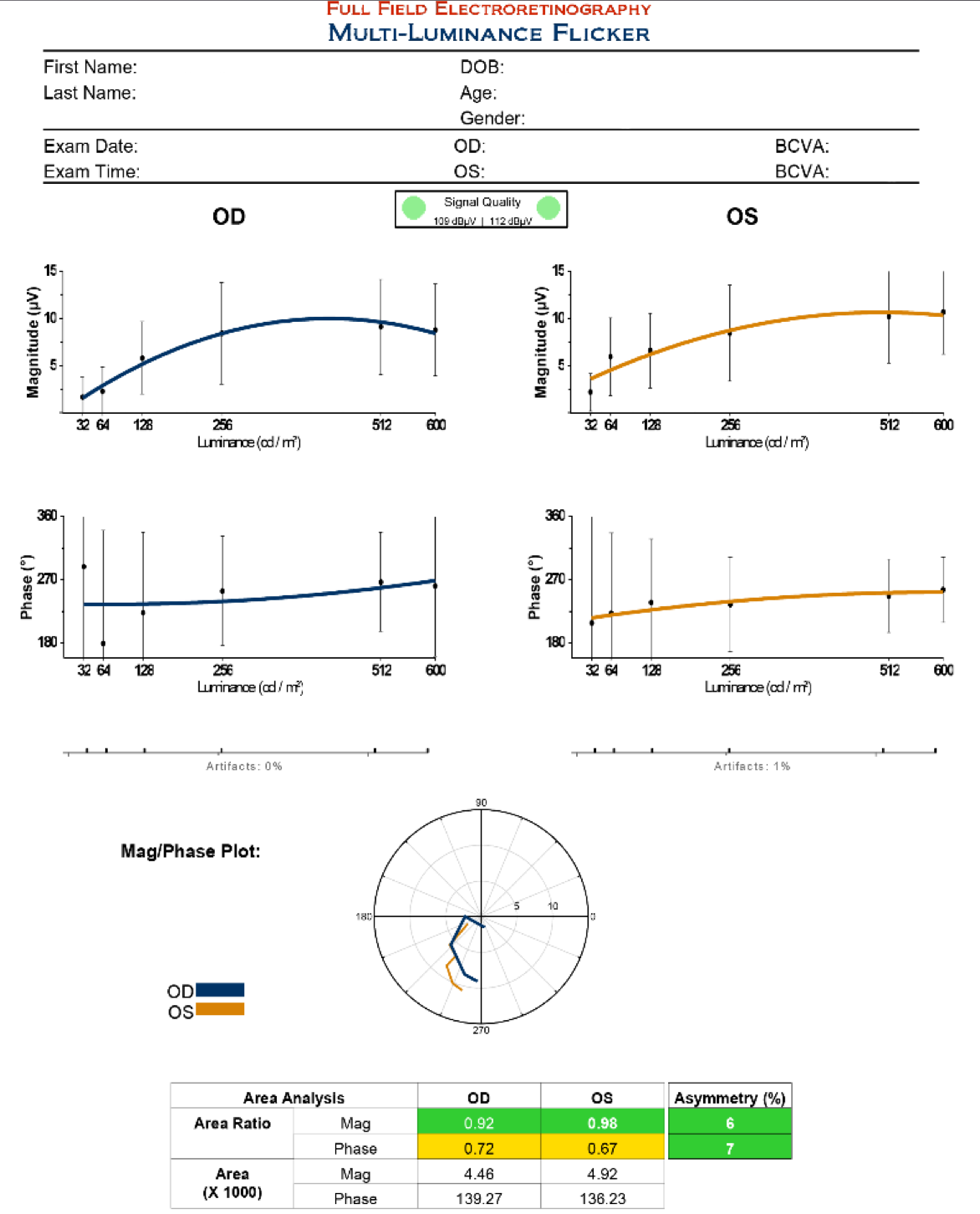 This ffERG with multi-luminance taken 6 months later shows that the areas under the curve and the area ratios have improved.

As noted previously, oxidative stress is one of the main contributors to diabetic retinopathy. The retina is very susceptible because of the higher oxygen uptake and glucose oxidation relative to other tissues. However, other abnormal findings suggest that diabetes may also be considered a low grade chronic inflammatory disease.

In a rat model study (Kowluru et al.), diabetic rats that were given a supplement containing antioxidants such as vitamins C, E, beta-carotene and N-acetyl cysteine had less frequent development of diabetic retinopathy as well as decreased levels of VEGF, an angiogenic factor, likely due to the reduction of oxidative stress. Additionally, antioxidants can prevent diabetic retinopathy by protecting mtDNA from undergoing damage by maintaining mitochondrial homeostasis.

This same study highlighted the importance of several other variables in the development of diabetic retinopathy. Lutein and zeaxanthin are macular pigments that have antioxidative and photoprotective activity. The rat model study demonstrated that zeaxanthin prevented increases in oxidative stress and levels of proinflammatory cytokines, VEGF and ICAM-1. Furthermore, this study reported increased levels of VEGF, IL-1B and NF-kB with the nutritional supplement.

NF-kB is an important regulator of the expression of cytokines and growth factors. Specifically, it has been demonstrated to increase IL-1B, which plays a significant role in retinal capillary cell apoptosis. The use of the dietary supplement demonstrated protection of the retinal vasculature as well as recovery of neuronal function as demonstrated by improvement in a-waves and b-waves on the ERG. Although the vasculature and neuronal function improved, there was no change found in the severity of hyperglycemia.

The Diabetes Visual Function Supplement Study was a randomized controlled trial that also studied the role of nutritional supplements (Chous et al.). It involved both type 1 and 2 diabetic patients with and without retinopathy. Patients in the treatment arm were given a nutritional supplement, ZeaVision DVS, which contained antioxidants, xanthophyll pigments and selected botanical extracts. Overall, the results showed that use of this nutritional supplement produced a clinically meaningful improvement in visual function compared to placebo. Specific measures that were improved in the supplement group included color error score, central visual field mean deviation, systemic lipid levels, c-reactive protein and diabetic peripheral neuropathy scores. The supplement group also had an increase in macular pigment density while having no effect on blood glucose levels.

Diabetes is a common disease that can have a potent effect on the retina. Abnormalities caused by oxidative stress and even inflammation can begin to show as early as 1 month after onset. Neuronal functionality can be detected by ERG, in particular ffERG, and deficiencies of the retina can be seen even before vascular abnormalities develop. Damage to the retina can be ameliorated by nutritional supplements like DVS that include carotenoids such as zeaxanthin and lutein, which are highly concentrated in the retina. Clinicians should strongly consider supplementation in diabetic patients as a more thorough understanding is gained regarding the pathogenesis of the disease and importance of vitamins and minerals on the health of the body’s vasculature.

Nate Lighthizer, OD, FAAO, is associate professor, assistant dean of clinical care services, director of continuing education and chief of specialty care clinics at the Oklahoma College of Optometry. He can be reached at: lighthiz@nsuok.edu.