A 71-year-old Native American female presented with a chief complaint of constant blurred vision at distance and near in the right eye, which began 2 weeks ago.

Her ocular history was positive for moderate nonproliferative retinopathy in both eyes with center-involving macular edema in the right eye. The patient has been followed as a glaucoma suspect due to a slightly larger-than-average cup-to-disc ratio with borderline inferior rim tissue thinning in both eyes in addition to a positive family history. Her ocular surgical history was remarkable for cataract extraction in both eyes. The patient has been under the care of a retina specialist for the past 5 years for macular edema in the right eye and has had multiple Avastin (bevacizumab, Genentech) injections and focal grid laser procedures for this. Her ocular medications included tear supplements for dryness in both eyes.

Best corrected visual acuities were 20/40+1 OD and 20/20 OS with a manifest distance refraction of -1.00 DS OD and plano -1.00 D x 085 OS. Her visual acuity was stable compared to previous exams. Extraocular muscles were full and unrestricted in both eyes. Pupils were equal, round and reactive to light without a relative afferent pupillary defect. Confrontation fields were full to finger count in both eyes. Amsler grid was positive for metamorphopsia of the entire grid in the right eye and unremarkable in the left. Anterior segment examination on slit lamp was remarkable for posterior chamber IOLs in both eyes, corneas were clear and not edematous in both eyes, the irides were negative for rubeosis iridis in both eyes, angles were estimated to be grade 4 nasal/temporal in both eyes by the Van Herick method, and the anterior chamber was deep and quiet in each eye. IOP measured by applanation tonometry was 35 mm Hg OD and 11 mm Hg OS at 3:53 p.m.

Nonmydriatic gonioscopy was performed. Both eyes were open to ciliary body band in all quadrants. No abnormalities were seen (ie, neovascularization of the angle, posterior anterior synechiae or angle recession) in either eye.

Fundus exam revealed a cup-to-disc ratio of 0.60 H/0.65 V OD and 0.60 H/0.60 V OS with perfused rim tissue in each eye. Multiple dot-blot hemorrhages and cotton-wool spots were present in all quadrants in both eyes. No venous beading, intraretinal microvascular abnormalities or neovascularization was present in either eye. The macula was thickened in the right eye and flat in the left. An OCT of the macula was taken to characterize the right macula, and it appeared improved compared to previous scans.

After discovering that IOP was elevated in the right eye, the patient was asked whether she had been experiencing any symptoms of eye pain or headaches, intermittent cloudy vision or ocular redness. The patient denied having any of these symptoms. She also denied any history of ocular trauma.

What’s your diagnosis?See next page

The differential diagnoses that were considered in this case of acute unilateral IOP elevation included:

Acute or chronic angle closure glaucoma occurs when the trabecular meshwork is occluded by the peripheral iris, obstructing aqueous outflow. This was ruled out because the patient had angles that were open on gonioscopy and did not have a plateau iris configuration.

Posner-Schlossman syndrome (glaucomatocyclitic crisis) is a rare condition characterized by unilateral acute raised IOP associated with mild anterior uveitis. This was considered unlikely because the patient did not have iritis or clinical signs of previous episodes, such as posterior synechiae or keratic precipitates.

Ocular hypertension (OHT) is often diagnosed when IOP is above the range of “normal,” which is commonly defined as greater than 21 mm Hg in a healthy eye. Angle closure and causes for secondary glaucoma should be ruled out when diagnosing OHT. The patient had an extensive IOP history at our clinic and was not documented as having OHT in either eye.

Long-term elevated IOP is associated with corticosteroid use and many ocular conditions and procedures. The patient has not had ocular surgery recently and denied using any form of steroids. However, her ocular history was remarkable for intravitreal anti-VEGF injections in the right eye. We determined that the patient had a long-term IOP elevation presumably secondary to repeated anti-VEGF injections.

The patient was started on Cosopt (dorzolamide HCl/timolol maleate, Merck), one drop twice daily in the right eye, and instructed to follow up with our clinic in 1 week for an IOP check. Prostaglandin analogues are often considered first-line therapy for ocular hypertension and open-angle glaucoma, however, this medication was not suitable in this case due to the potential side effect of worsening macular edema. Instead, we elected to prescribe Cosopt because it is proven to be very effective at lowering IOP and for convenience (fixed combination therapy allows for fewer medications and less frequent dosing compared to monotherapy).

The patient was also given a finalized glasses prescription and instructed to continue care with the retina specialist for macular edema in the right eye.

Effects of anti-VEGF on IOP 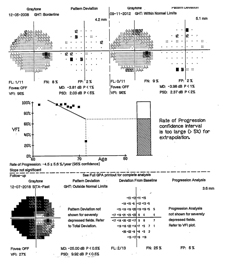 Anti-VEGF therapy has quickly become a mainstay of treatment in posterior segment diseases that are characterized by neovascularization or macular edema. Commonly used anti-VEGF agents include Lucentis (ranibizumab, Novartis/Genentech), Avastin and Eylea (aflibercept, Regeneron). These agents are generally well-tolerated by patients, however, numerous adverse ocular effects have been reported, ranging in severity from harmless subconjunctival hemorrhages to devastating endophthalmitis infections. One of the side effects that has come into focus recently is the effect of anti-VEGF on IOP and development of glaucoma.

Elevated IOP after anti-VEGF therapy can be either transient or sustained. Short-term transient IOP increases are a well-known complication of intravitreal injections, while long-term IOP rises are not well understood and even disputed as a complication by some researchers.

Repeated intravitreal anti-VEGF injections have been associated with chronic ocular hypertension. This is different from short-term IOP spikes that occur immediately after each intravitreal injection. There are conflicting results in the literature; several studies have reported long-term elevations of IOP after anti-VEGF injections, while others found no long-term IOP change. Of the studies that reported IOP elevation after anti-VEGF injections, the prevalence of patients that had post-injection IOP elevations was between 2.6% and 14.8% (Al-Abdullah et al., Atchinson et al., Choi et al., Freaund et al., Hoang et al., Kim et al., Mathalone et al., Silva et al.).

Our patient had been getting Avastin injections at 6- to 8-week intervals for 5 years before she developed a sustained IOP elevation. She had several risk factors for developing long-term IOP elevation: She received a large number of injections and was given injections in short intervals.

The patient returned 3 weeks later for an IOP check. She reported excellent compliance with Cosopt one drop twice daily in the right eye. IOPs measured by applanation tonometry were 18 mm Hg OD and 14 mm Hg OS at 2:30 p.m.

Because the patient was being followed as a glaucoma suspect, we had a detailed IOP history with 10 years of IOP measurements for this patient. Her pressures ranged between 10 mm Hg and 16 mm Hg OD before the IOP spike occurred. The goal of treatment was IOP reduction to baseline pressure or lower. The target pressure set for her right eye was less than 16 mm Hg.

The pressure in the right eye was much lower in comparison to the initial visit, however, it was still significantly higher than her baseline pressures of 10 mm Hg to 16 mm Hg. Additional IOP-lowering medications were prescribed to reach our goal pressure.

Once pressure was at goal and stable, additional testing was ordered to determine if glaucomatous damage resulted from the IOP spike. The left eye revealed normal optic nerve head (ONH) OCT scans and visual field findings, not indicative of glaucomatous damage. The ONH OCT of the right eye revealed retinal nerve fiber loss in all quadrants compared to 1 year ago. Diffuse generalized depression was present on Humphrey visual field 24-2 testing in the right eye, with a mean deviation of -25.00 dB and pattern standard deviation of 9.92 dB. The rate of progression was -4.5 +/- 5.6% per year. Fundus exam revealed a cup-to-disc ratio of 0.70 H/0.75 V OD and 0.60 H/0.60 V OS with 1+ diffuse pallor in the right eye and pink healthy rim tissue in the left eye.

The diagnosis was changed to secondary open angle glaucoma related to repeated intravitreal anti-VEGF injections. She was counseled on our findings and educated that the goal of treatment is to maintain IOP at an acceptable level to prevent further progression. The patient continues to be followed closely by our clinic to ensure that IOP remains at goal and that her condition is stable.

Unfortunately, the macular edema in her right eye has not resolved, and she continues to see the retina specialist for this. We have informed them of our findings and concerns for this patient.

Anti-VEGF therapy has revolutionized the treatment of many retinal diseases and its use has skyrocketed in the past decade. The widespread use of these agents in the eye are not without side effects, including their effects on IOP. Transient IOP spikes immediately after intravitreal injections are a common and well-established side effect. Recently, several studies have found evidence that intravitreal anti-VEGF therapy may put patients at risk for sustained IOP elevation. We look forward to future studies that will further our understanding of the relationship among anti-VEGF treatments, IOP, and the onset and progression of glaucoma.

In our patient’s case, elevated IOP was detected during a routine glasses check. It is unclear as to how long her pressure was elevated; unfortunately, extensive glaucomatous damage occurred within that time. The patient’s IOP continues to be stable with use of Cosopt and Simbrinza (brimonidine 0.2%/brinzolamide 1.0%, Alcon), and she has not had further visual field deterioration or retinal nerve fiber layer thinning over a 6-month follow-up period. We will continue to monitor this patient closely and add IOP-lowering medications or refer for laser/surgical intervention if IOP becomes elevated or progression occurs. Understandably, the patient has been reluctant to continue having injections with her retina specialist. We have encouraged her to continue care with them to prevent vision loss due to complications related to diabetes.

Optometrists should be aware of this side effect and closely monitor IOP in patients undergoing treatment with anti-VEGF therapy. Timely identification and treatment of patients with sustained IOP elevation is crucial to prevent progression to secondary glaucoma and minimize resulting vision loss.

Paula Johns, OD, MPH, FAAO, is deputy chief of optometry at Santa Fe Indian Hospital. She can be reached at: paula.johns@ihs.gov.

Joanna Yee, OD, completed her residency in primary care and ocular disease within Indian Health Service and is now a staff optometrist at Santa Fe Indian Hospital. She can be reached at: joanna.yee@ihs.gov.