Hong Kong Polytechnic University has developed a spectacle lens that slowed myopia progression by 60% and halted progression in 21.5% of Chinese children in a randomized controlled trial, according to a press release from the university.

“We have patents from China and [the technology] is in the process for the U.S.,” Carly Lam, BSc (Hons), MSc, PhD, principal investigator and professor, School of Optometry, The Hong Kong Polytechnic University, told Primary Care Optometry News. “The company collaborating with us on the lens design is HOYA Corporation. The plan is to launch the lens in Hong Kong and China this summer and then to Japan, Europe and the U.S. the following year.”

The Defocus Incorporated Multiple Segments (DIMS) Spectacle Lens was designed by Professor Lam and To Chi-ho, Henry G. Leong Professor in Elderly Vision Health and Head of the School. 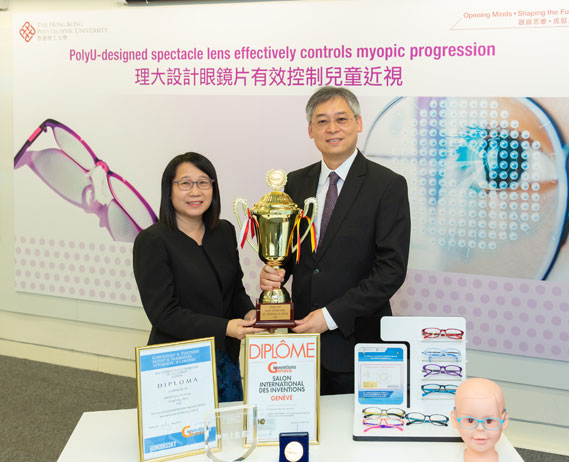 The DIMS Spectacle Lens is made up of a central optical zone for correcting refractive error and “multi-segments of constant myopic defocus surrounding the central zone extending to mid-periphery of the lens,” making use of emmetropization, “whereby the eyeball adapts and shapes to receive focused images as it does for normal vision,” the release said.

A total of 160 children aged 8 to 13 years were enrolled in the double masked trial. Myopia ranged from 1 D to 5 D, and astigmatism and anisometropia equaled 1.5 D or less. The trial period was August 2014 to July 2017. Seventy-nine children were assigned to the DIMS Spectacle Lens treatment group and 81 children wore single vision spectacle lenses.

Mean myopic progression in the treatment group was 0.38 D and in the control group was 0.93 D.

The lens is designed for slowing myopic progression in children and has won the grand prize, grand award and gold medal with the Congratulations of Jury at the 46th International Exhibition of Inventions in Geneva this year.

In the trial, children wearing the DIMS Spectacle Lens had significantly less myopic progression by 59%, as well as axial elongation by 60%, compared with those wearing the single vision lenses, according to the release.

Children in the treatment group reported that the lens “could provide comfortable, good vision at short and long distances, and good perception of depth” akin to single vision spectacle lenses, the release said. – by Abigail Sutton