Courts may decide if OCT is standard of care

Previous cases have shown that juries, not eye care professionals, have determined what is standard.

Once in a while, a single case changes everything. This was documented in both Helling v Carey and Karen Keir v the U.S. Government. The following true tale of two sisters may be the next major milestone or precedent-setting case that will change the way we practice routine eye care on a day-to-day basis.

Both sisters had myopia and were in their 40s. They were separated by three time zones and spent time together at least once a year via a nonstop flight connecting their two cities. They were similar in appearance, with dirty blond hair and blue eyes, and were occasionally thought to be twins. The older of the two sisters was diagnosed and treated for glaucoma about 5 years earlier. In contrast, the younger sister was being followed once or twice a year as a glaucoma suspect by a doctor in her home town.

A subsequent review of their records revealed that both had similar IOPs in the range of 19 mm Hg to 22 mm Hg and no relevant health history. Both sisters had cup-to-disc ratios judged as 0.6 without an obvious notch in either eye. Both had central corneal thickness measurements in the 540 µm to 550 µm range in both eyes. Both were about average in their ability to perform a threshold visual field. Their fields were never perfect and did reveal some minor scattered but variable reductions in sensitivity with some fixation losses. None of the fields was characteristic of glaucoma.

The older sister’s doctor obtained a spectral domain (SD) OCT about 5 years earlier. Using the screening program, it demonstrated a rather marked reduction in the ganglion cell complex (GCC) that was worse in the left eye than the right. The OCT retinal nerve fiber layer (RNFL) was also abnormal and correlated with the GCC. Prior to treatment, this doctor did a modified diurnal IOP, which reached 28 mm Hg in the left eye. So, the older sister was diagnosed with and has been treated for glaucoma in both eyes for the last half decade.

The younger sister’s doctor did not have an OCT – nor a GDx (Carl Zeiss Meditec) or Heidelberg Retina Tomograph (Heidelberg) and never referred her to another facility with such devices. As many of us do, he relied on the IOP, disc appearance and results of the threshold visual field, which were all apparently stable over more than half a decade. 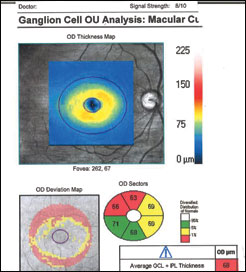 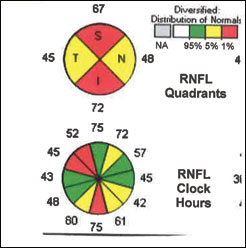 This patient who has undergone glaucoma treatment for several years maintains a normal visual field but marked loss of ganglion cells and RNFL.

Ironically, on one family visit the older sister had a scheduled eye exam and she brought her visiting younger sister along. The doctor mentioned that glaucoma often runs in families, and the younger sister revealed that she was under care in her home town and being followed regularly as a glaucoma suspect. The doctor insisted on at least performing a 1-minute OCT screening, and it revealed substantial loss of the GCC, worse in the right eye than the left. He gave the younger sister the color printout and highly recommended that when she returned home she should be re-evaluated for glaucoma.

Several months later, the younger sister saw her regular eye doctor for a glaucoma check-up but had lost the color printout and could not recall what it demonstrated. The doctor reassured the patient that her eye pressures and the back of the eye were unchanged, and the fields were still within normal limits. Three additional exams over the next 18 months were unremarkable.

Perhaps not surprisingly, the new doctor diagnosed and immediately began treating the younger sister. Although his OCT was made by a different manufacturer than the one his colleague used several years earlier, both demonstrated the same pattern of GCC and RNFL loss in both eyes. Regrettably, the loss was substantially greater than years earlier; however, visual fields were still practically intact. Based upon the manufacturer’s normative database, the younger sister had appeared to have lost about half of her ganglion cells and RNFL in both eyes but was still asymptomatic.

Many of us have seen similar cases with advanced loss of ganglion cells and their axons but normal visual fields.

For example, as shown in the accompanying images, a 60-year-old glaucoma patient who has been treated for glaucoma for several years still maintains a normal visual field in the right eye but marked loss of ganglion cells and RNFL. Every visual field in the right eye has been normal. This suggests that structure may be lost prior to function as monitored with visual fields. In this case and others, pattern electroretinograms and pattern visual-evoked potentials often demonstrate loss of function even though visual fields may not.

In Helling v Carey, a female contact lens patient with myopia who was younger than 35 years lost vision due to undetected glaucoma. The standard of care at the time was that IOPs be measured on patients older than 35 years. The judge instructed the jury to disregard the standard of care if a test was available that could have prevented the loss of vision over the decade the patient was under care by the ophthalmologist. The jury found the ophthalmologist culpable of malpractice even though he met the existing standard of care. This single case set a precedent that tonometry is to be performed on virtually all patients, not just those older than 35 years.

In Karen Keir v the U.S. Government, Keir, at age 4 years and 4 months, was diagnosed with a retinoblastoma in one eye. The optometrist who examined her previously did not perform a dilated fundus exam (DFE) with binocular indirect ophthalmoscopy (BIO). The three federal judges who tried the case concluded that DFE with BIO was required even though vision was normal and equal in both eyes. This case set a precedent for performing DFE with BIO on essentially all patients. (Ultra-widefield imaging through an undilated pupil was not available at the time and, hence, was not discussed.) 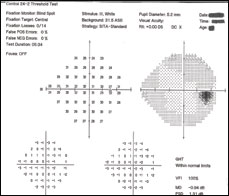 This is the same patient’s most recent SITA standard, with a normal glaucoma hemifield test and visual field index of 100%.

However, the two precedent-setting cases discussed here reveal that the courts, not eye care professionals, may set a new standard of care. If the case of the younger sister goes to trial, it is certainly possible that the jury will find the optometrist culpable of malpractice, even if he met the existing standard of care. As in Helling v Carey, if a noninvasive test exists that could prevent blindness, one could argue that the test should have been done. There is evidence that the issue of causation has been met, and the plaintiff’s attorney will point out that even with treatment, the younger sister may still progress to blindness because she already has advanced loss of structure and she may live another 4 or even 5 decades.