Researchers and experienced eye care providers are supporting the use of intense pulsed light to treat patients with meibomian gland dysfunction and dry eye disease.

Meibomian gland dysfunction (MGD) is considered to be one of the leading causes of dry eye and affects between 4% and 20% of Caucasians and more than 60% of Asian populations, according to Nichols and colleagues. These researchers noted in Investigative Ophthalmology and Visual Science that treatment of the disorder is varied and inconsistent.

“Underreporting makes it difficult to assess practice patterns accurately, but most practitioners agree that underdiagnosis is common, and clinical follow-up irregular,” they said.

Intense pulsed light (IPL) has emerged as a possible therapy for patients with MGD who have run out of other options. The treatment, which originated in dermatology, was found to help patients with dry eye disease (DED) and MGD who happened to be receiving a treatment for their skin.

“The leap in understanding is that, for many people, dry eye is part of a skin condition, and that the meibomian glands in the eyelid skin are the problem, or at least a major contributor to the vicious cycle of inflammatory dry eye,” Joanne F. Shen, MD, an ophthalmologist at the Mayo Clinic in Arizona, told Primary Care Optometry News in an interview.

Toyos and colleagues wrote in a study published in Photomedicine and Laser Surgery in January: “In 2002, we began to observe that some of our patients treated with IPL showed improvement in MGD and DED. Based on these observations, the Toyos Clinic continued to develop and refine the treatment. Since that time, we have presented study results at several meetings showing how IPL improves MGD and DED. Over the years, we have perfected the technique and technology to maximize results and minimize complications.” 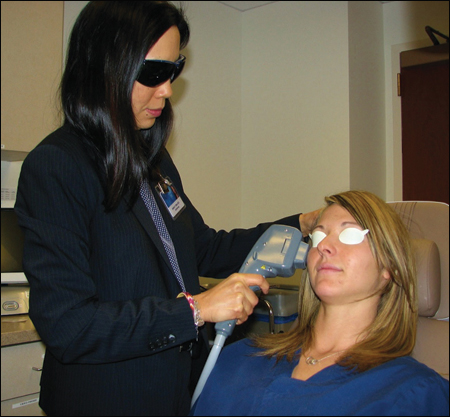 Joanne F. Shen, MD, shown here administering intense pulsed light therapy, said this is the only treatment that has provided relief to many of her dry eye patients.

The researchers explained the process behind the technology: “IPL has been used in dermatology practices for several years as a treatment for rosacea and acne. IPL uses a Xenon flashlamp to emit wavelengths of light from 400 nm to 1,200 nm. When placed on the light, a filter restricts the wavelength to the visible light range of ∼500 nm. When applied to the skin, this 500 nm light causes the blood cells in the abnormal telangiectasias to absorb the light, coagulate and, finally, to close the blood vessels.”

“In 2007-2008, an IPL treatment technology – the Diamond Q4 by DermaMed Solutions – was specifically configured to our specifications,” they reported.

“Research shows that, at least in other parts of the body, you get an increase in transforming growth factor and probably other growth factors that improve cell function,” Shen explained. “It rejuvenates you, and that probably helps reverse some of the inflammation that we see in the skin.”

“We also discovered that dry eye patients are better positioned for gland expression, as IPL seems to liquefy the abnormal viscous meibum and dilate the glands,” they said.

They explained that patients have said that their dry eye symptoms have been managed better with gland expression after IPL rather than IPL alone.

Michelle M. Hessen, OD, FAAO, a clinical instructor at the Wilmer Eye Institute and a member of the Ocular Surface Disease and Dry Eye Team, told PCON that IPL can be used to treat dry eye associated with blepharitis and MGD as well as ocular rosacea.

“IPL is very easy to use,” she said. “Patients come in for the treatments about every 4 to 5 weeks, and the treatment lasts about 20 to 30 minutes. On average, patients receive four treatments, but it’s completely based on the individual’s progress in terms of how many they need.”

Toyos explained that the intensity of the IPL therapy can range from about 8 J/cm2 to 20 J/cm2, depending on age and disease severity.

Hessen detailed the treatment process, which she said is not painful.

“The patient’s eyes are initially patched for protection, and then cooling gel is applied to the treatment area to absorb some of the heat from the light,” Hessen described. “A handheld device is used to administer pulses of light to the cheek and surrounding area. There are multiple light pulses across those areas.

“Afterwards, the cooling gel is removed as well as the eye patches, and meibomian gland expression is performed to express all of the thickened meibum in the glands and to evaluate the quality of the meibum,” Hessen continued. “The patient is usually put on a low-dose anti-inflammatory for 3 days after each treatment for managing inflammation caused by the expression rather than the light therapy itself.”

Shen said that patients will receive 18 to 24 pulses of light during each treatment, which can feel warm and occasionally like a tiny rubber band snapping on the skin.

“The majority of patients need four or five treatments, but if they improve after three, they can stop there,” Shen stated. “They will typically experience mild mucous discharge and irritation for up to 36 hours and generally have improvement for a few days to a few weeks after their treatment, before regression. After four treatments, typically we see sustained improvement of the patient’s dry eye symptoms.”

Meibomian gland expression is performed after the light treatment.

Results showed that more than 90% of participants improved over the three metrics they used to assess MGD: improvements in lid margins and meibum evaluated by a physician and self-reported satisfaction.

Another 2015 study published in Investigative Ophthalmology and Visual Science analyzed the efficacy of IPL and found positive results. Craig and colleagues conducted a prospective, double-masked, paired-eye, placebo-controlled study of 28 patients over 45 days.

They utilized a third-generation IPL device available in Australia and New Zealand. E>Eye (E-SWIN) was developed for periocular application, according to the study, and is medically certified for treating MGD.

“The management of MGD in clinical practice remains challenging, as patient compliance with physician-recommended self-administered therapies is notoriously poor,” Craig and colleagues wrote. “Our results suggest therapeutic potential for sculpted pulse IPL therapy with the E>Eye for the management of MGD, on the basis of significant improvements in lipid layer grade (LLG), tear film stability and reduced symptoms.

“The serendipitous discovery of ocular benefits following facial rosacea treatment has led to clinical centers offering IPL as a treatment for MGD on the basis of reports of reduced fluorescein staining and severity of MGD, as well as improvements in visual function and comfort, with some suggesting an apparent cumulative effect,” they continued. “However, evidence of the success of this treatment modality to date has been largely anecdotal, arising from retrospective, open-label evaluations, and no randomized controlled, investigator-masked studies are yet available.”

They continued: “The significantly increased lipid quantity on the tear film surface following treatment suggests that outflow of meibum from the glands has been facilitated by the IPL treatment. The benefits, furthermore, appeared to be cumulative, such that after a course of three treatments over 45 days, 82% of treated eyes exhibited significant improvements in their LLG of at least one grade, and 65% exhibited an improvement of at least two lipid grades.”

Shen and Hessen reported that they have seen similar results in their patients, who have largely provided them with positive feedback on the treatment.

“Many of my patients were referred because nothing else helped them and they had been suffering for almost a decade with dry eye,” Shen said. “They had tried everything available, and IPL was actually the first time they got any relief. So for some patients, it’s been a life-saver. It’s allowed them to function in regular activities like reading and using the computer – very visually intense activities – where before, they were very light sensitive and they couldn’t tolerate wind or sun.”

In his published study, Toyos said that IPL candidates must have a Fitzpatrick skin type of 1, 2, 3 or occasionally 4. Other skin types are not suitable for the procedure.

Both Hessen and Shen explained that the best candidates for the procedure have not been determined and suggested that more research could help.

“Twenty percent of my patients will go through a series of four proper treatments and yet not respond,” Shen explained. “We have determined that patients who are the best candidates for IPL are those who have minimal to no meibomian gland atrophy and have no scarring/keratinization of the lid margin.”

They noted that the side effects are relatively minor.

“In terms of side effects, there’s concern with very frequent dosing of IPL that you could potentially thin the skin because you are targeting the blood vessels in the superficial skin layers,” Shen said. “So people with very thin skin are concerned with dark circles around their eyes. You have to be careful about doing more than four to five treatments per year.”

Hessen cautioned that patients will have some skin sensitivity following the procedure.

“Patients have to protect their skin from sunlight for about 2 weeks with some 30 SPF because they are at higher risk for sunburn to their face,” she said. “We also want them to avoid any facial microdermabrasion or anything else that could irritate the area.”

Because the treatment is light-related, there is the potential of serious damage.

“In terms of risks, obviously you want to shield the eyes completely when performing IPL,” Shen said. “Any sort of pigmented tissue such as the iris will pick up the light and be harmed. There have been case reports in the past where providers – not [eye care professionals] – treated skin, and the patient’s eyes weren’t masked. They were trying to get really close to the eyelid margin and unfortunately caused permanent damage, vision loss and light sensitivity.”

Toyos and colleagues reported that 13 patients experienced an adverse event during the trial, and two of those 13 ended treatment. Researchers defined adverse events as cheek swelling, floaters, blistering, conjunctival cysts, light sensitivity, brow or forehead hair loss and facial redness. They wrote that most adverse events resolved themselves within a week.

Toyos said that no serious adverse events were reported.

How to get started

Shen told PCON that Toyos will support eye care providers who purchase the machine through DermaMed.

“He’ll actually come and train you and he’s very helpful in answering questions about selecting patients and what to expect,” she explained. “I never had experience using any sort of dermatology light treatments or lasers, so in terms of my medical background, I was able to incorporate this into my dry eye practice quite easily.”

“Dr. Toyos, who really furthered the technology, personally trained me,” she said. “He’s the most knowledgeable and has the most expertise in conducting continued research in this area and continuing to improve the technology to help patients.”– by Chelsea Frajerman