A 57-year-old white female presented to clinic with a red, irritated right eye. The patient was in moderate to severe discomfort from stinging and watering; however, no discharge or photophobia was reported. The onset of symptoms was 1 day prior to her visit, and symptoms were reported to be stable.

Her medical history was remarkable for mild depression and lower back pain, for which 10 mg of Lexapro (escitalopram, Forest Laboratories) once daily, a selective serotonin reuptake inhibitor (SSRI) and a muscle relaxer as needed were prescribed. No drug allergies were reported.

The patient was self-treating her eye problem with saline solution eye wash; 200 mg of Motrin (ibuprofen), two tablets four times daily; and two tablets of 25 mg of Benadryl (diphenhydramine HCl). No relief from symptoms was experienced with this treatment.

Her best corrected visual acuity on the day of examination was 20/40 OD and 20/20 OS. Baseline data from a previous comprehensive examination (1 year ago) yielded BCVA of 20/20 OU. Ocular motility was unrestricted in all gazes, and there was no constriction of confrontation visual fields. Pupils were round, equal and reactive to light with no afferent pupillary defect in either eye. 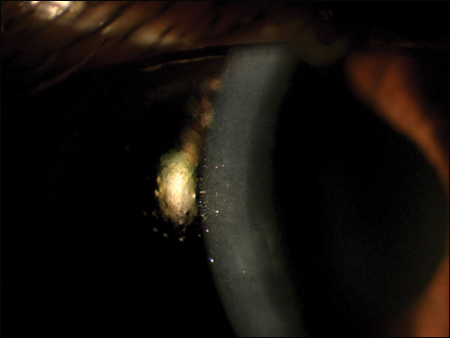 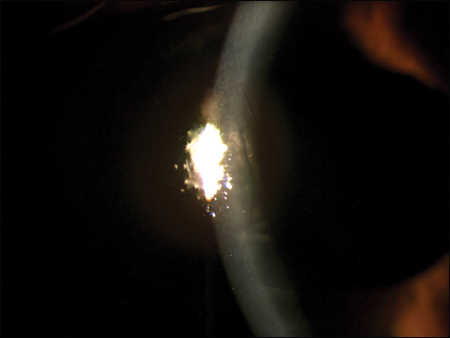 Fuch’s endothelial dystrophy is the most common cause of corneal edema in this patient’s age group. It is an inherited condition resulting in the gradual loss of endothelial cells. Fuch’s affects both eyes and is slightly more common among women than men. It generally begins during the fifth decade of life and gradually progresses.

Symptoms include decreased vision, which is worse upon awakening, and pain secondary to ruptured bullae. Clinical findings include endothelial guttata, Descemet’s membrane folds, stromal edema and epithelial edema. With severe corneal edema, it is often difficult to appreciate the endothelial changes.

Several inflammatory processes can lead to corneal edema, the most common being endotheliitis associated with herpes viruses. Endotheliitis is an immune reaction that can occur months to years after an episode of infectious keratitis. Symptoms include pain, photophobia and redness. Clinical features include keratic precipitates (KP), stromal edema and iritis. Unlike interstitial keratitis, endotheliitis is not associated with stromal infiltrates or neovascularization.

Ocular surgery can lead to corneal edema immediately after surgery or years later. Causes of acute postop corneal edema include endothelial damage due to ultrasound energy, infusion of toxic substances into the anterior chamber and stripping of Descemet’s membrane. Clinical symptoms include poor vision, pain, foreign body sensation and photophobia. Clinical findings include stromal and epithelial edema, as well as folds in Descemet’s membrane.

This patient denied a history of ocular surgery or trauma, and there was no evidence of other anterior segment abnormalities.

This patient reported she was feeding a friend’s Monarch butterflies while the friend was out of town. Milkweed, the exclusive diet of these butterflies, is a wildflower in the genus Asclepias and contains glycoside toxins to help fend off its predators. These toxins produced are similar to cardiac glycosides such as digitalis, which affect Na/K ATPase pumps. This patient reported her ocular discomfort and redness began shortly after handling the milkweed plant.

Corneal endothelial cells exhibit a high pump site density and, along with barrier function, are responsible for maintaining the cornea in its natural state of relative dehydration. Gradual loss of endothelial cells leads to an insufficient water outflow, resulting in corneal edema and loss of vision. It has been shown in various studies that glycosides such as digitalis and ouabain decrease endothelial pump function and cause corneal swelling. This rare presentation of corneal endothelial toxicity has been cited in the literature only a few times.

Given my patient’s unique history and ocular signs absent of additional sequelae, it was concluded Asclepias toxicity was the cause of this acute endotheliitis.

This patient was treated with topical prednisolone acetate four times daily with a 3-week taper. On 1-week follow up examination the patient’s vision had returned to 20/20, and her eye was unremarkable.