Read Next
11 min read
Save

After nearly 2 decades of clinical application in the U.S., LASIK has achieved high success and satisfaction rates, according to studies performed by the U.S. Food and Drug Administration.

In addition, a separate survey conducted by the International Society of Refractive Surgery has shown an increase in the number of LASIK procedures being performed.

PROWL-1 and PROWL-2, part of the U.S. Food and Drug Administration’s LASIK Quality of Life Collaboration Project, presented at the recent American Academy of Ophthalmology meeting by Malvina B. Eydelman, MD, showed that the overall prevalence of visual symptoms, such as ghosting, glare, halos and starbursts, did not increase in patients undergoing LASIK.

Some experts believe the study, performed in response to reports of post-LASIK visual symptoms, speaks to the procedure’s safety and efficacy.

The U.S. Trends in Refractive Surgery: 2014 ISRS Survey, also presented at the AAO meeting by Richard J. Duffey, MD, showed that LASIK began to rebound in 2014 after a decade-long decline that Duffey attributed to the economic recession and publicized reports of poor outcomes and visual symptoms.

Many eye care practitioners attest to positive visual outcomes as well as a recent uptick in patients choosing to undergo the procedure.

“The conversation I have with patients on a daily basis is simply: “I am not here to talk you into LASIK; I am here to evaluate you to make sure you should not consider the procedure if you cannot get a great result,” Bloomenstein told PCON. “The process of screening patients has enabled the results of this study to shine like they do. We now have a much better understanding as to what parameters leave patients at greater risk for complications or less than optimal vision.”

Both Bloomenstein and Andrew Morgenstern, OD, FAAO, vice president of the Optometric Council on Refractive Technology, said that the results reflected the views of patients and eye care providers they have personally encountered.

“The studies validate the safety and patient satisfaction that we have been hearing from our patients for almost 2 decades,” Bloomenstein said. “What really stands out is the reduction in patients’ perceptions of the very complications that critics have long complained about with LASIK. Modern-day LASIK procedures, with wavefront optimizing and a skilled surgeon using femtosecond lasers, are actually improving patients’ vision as opposed to not decreasing it. Combining this with the lack of any real serious complications validates the procedure.”

“The results are an honest look at the procedure,” Morgenstern told PCON. “For those of us who have worked extensively with LASIK and all refractive surgery, we are well aware that there are potential side effects, which are mostly temporary and rarely permanent. A good LASIK candidate has an extremely low risk of having a complication, especially when properly screened and treated with the correct equipment by a competent and experienced surgeon.”

One eye in PROWL-1 and no eyes in PROWL-2 lost two or more lines of best corrected visual acuity at 3 months. No eyes had BCVA worse than 20/40 or more than a 2-D increase in cylinder.

“The visual outcomes are the best prospective outcomes that have been reported … . In fact, if you look at the [earlier] data, I think our 20/20 rate was around 60%, compared to 99% and 96% with this current study,” Kerry D. Solomon, MD, told Primary Care Optometry News sister publication, Ocular Surgery News.

“It’s reassuring to know that the study showed, in a prospective, scientific fashion, the results that many of us who do LASIK surgery see every day,” he said. “Our LASIK technology and visual results have improved over time. The vast majority of people see very well without needing correction.”

Overall, 0.2% of eyes lost two or more lines of BCVA from before surgery to 3 months.

Mitchell A. Jackson, MD, said that the satisfaction rate exceeded that of many other surgical procedures.

“Overall, patients experienced improved symptoms after surgery with an extremely high satisfaction rate. That’s better than most things in medicine, not just in the eye world,” Jackson told OSN. “There was a subset of patients who reported experiencing at least one new symptom postoperatively that was not present preoperatively, but this didn’t really diminish the overwhelmingly positive patient response.”

“Even with the high success rates of LASIK, it’s still important to continue to look at the etiologies associated with patient dissatisfaction,” he continued. “If we can learn from this small group of dissatisfied patients, we can hopefully continue to make this procedure even more successful in the future. This study was fairly short, with only 3 months’ follow-up. The most common reason for patient dissatisfaction reported in the literature is residual refractive error (the need for an enhancement). A 4% enhancement rate is fairly typical. Enhancements were not permitted in this study. It’s likely that if enhancements were permitted and performed, the reported dissatisfaction rates would have been even lower. Also, some of the dissatisfaction at 3 months, if associated with dry eye, may actually have been made better with time.”

Results of the FDA studies showed that prevalence of visual symptoms did not increase.

“This is the first time that we’ve been able to show that patient symptoms, especially glare, halo and night driving problems, were significantly improved overall after surgery compared with before surgery,” Daniel S. Durrie, MD, told OSN. “It was a very positive study that showed that LASIK surgery is very safe. It also showed that several of the symptoms that people worried about on average went down after surgery, which was very important.”

“These are extraordinarily important findings that show that the results really do improve greatly,” Eric D. Donnenfeld, MD, told OSN.

Solomon said that patients were examined with correction before surgery and without correction after surgery.

“Even in that set-up, people tended to have their symptoms made better afterward without correction compared to before with correction,” he said. “What is not known is that if we gave them correction, a thin pair of glasses for driving, as an example, or an enhancement, would those symptoms that were still present be made better? It’s unknown. Those data just weren’t reported.”

Less than 1% of patients had difficulty with or were unable to perform normal activities because of visual symptoms at 3 months. 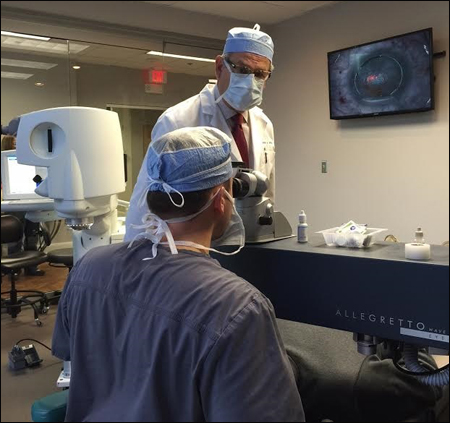 Up to 30% of patients developed new dry eye symptoms after surgery. Solomon and Donnenfeld both noted that dry eye typically improves after 3 to 6 months postop.

“What most people know is dry eye tends to develop in the majority of patients immediately after surgery and tends to resolve or get better in a lot of patients, but it will tend to get better in 3 to 6 months and sometimes longer,” Solomon said. “What we don’t know is in those patients that have new dry eye symptoms, will this resolve on its own over time?”

A need to focus on positives

Duffey said that the data, while focused on visual symptoms, were overwhelmingly positive.

“If you take a look at those patients who had visual symptoms before surgery — glare, ghosting, starbursts — overall there’s about a 35% reduction in those symptoms of patients that had them there before. That’s significant,” Duffey said.

Still, the PROWL studies should have examined activities related to quality of life, not just symptoms, according to Duffey.

“They called these quality-of-life studies, but all they looked at were negatives,” Duffey said. “They looked at glare, halos, starbursts, ghosting and dry eye problems, but nobody looked at increased color perception or increased enjoyment of vision during exercise, while at work, during leisure, playing sports. If you’re truly going to do a quality-of-life study, you really need to look at the positives as well, not just the negatives.”

The U.S. Trends in Refractive Surgery: 2014 ISRS Survey showed that after declining steadily since 2001, LASIK volume began to rebound in 2013-2014.

“The original reduction, in my opinion, no doubt was from the economy. It started in 2001, after 9/11. So, we were seeing the effects of it,” Duffey said. “But I also think that there has been some negative publicity. When LASIK was down and out because of the economy, there was a little bit of a piling-on effect that existed with the media.”

The survey showed that surgeon-reported monthly LASIK volume peaked in 2001 and declined steadily from 2004 to 2013. However, LASIK saw a resurgence in 2014.

“Commercial laser facilities and some primary care optometrists misinform patients,” he said. “Commercial laser facilities make claims of unrealistic expectations, and primary care optometrists claim that it doesn’t treat astigmatism or farsightedness and that outcomes are not consistent or permanent because it takes patients out of the glasses marketplace. If this profession would continue to do what’s best for the patient, it would always be in the forefront.”

Bloomenstein said that, despite the negative publicity, those involved in refractive surgery are confident and have seen consistently positive results.

“I remember a few years ago that Morris Waxler, PhD, a former FDA official on LASIK, was speaking to Dr. Oz and was not very supportive,” he said. “In fact, I know some of my colleagues and I received phone calls regarding that episode with caution about the procedure. However, those of us who have been working in the refractive surgical arena have been fortunate enough to witness the results of the study. It is nary a surgical day that goes by without seeing patients gain lines of acuity or at the very least stay best corrected.” – by Matt Hasson and Chelsea Frajerman