One of the most controversial debates surrounding the optometric profession is the use of lasers in a surgical capacity. The majority of optometrists who responded to a poll on Healio.com/Optometry stated that they would use lasers in practice if permitted by state law.

Politics aside, many optometrists are looking to offer the most accessible and complete care possible, especially in more rural areas where ophthalmologists may be few or nonexistent.

It all began in Idaho when three optometrists decided to perform PRK at the Idaho Refractive Center with the support of the Idaho Optometric Association in 1996. Although a judge eventually ruled that the Idaho Board of Optometry was not authorized to allow optometrists to perform the procedure, the judge had no complaints in regard to the performance of the optometrists. In under a year, optometrists had provided between 50 and 60 PRK procedures, according to an earlier report by Primary Care Optometry News.

Since then, optometrists in two states – Oklahoma and Kentucky – have succeeded in passing legislation that allows them to perform laser procedures. 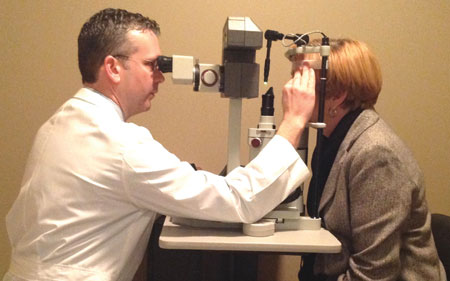 John Heltsley, OD, performs YAG capsulotomy on a patient in his office in Kentucky.

Laser use in Oklahoma, Kentucky

In Oklahoma, 707 optometrists are laser certified, and 518 of them actually practice within the state, according to Russell Laverty, OD, executive director of the Oklahoma Board of Examiners in Optometry. The state expanded its scope of optometry to include laser surgery procedures in 1988, with the exclusion of retina, LASIK and cosmetic lid surgery.

Both states require an optometry degree, laser-specific instruction, clinical experience with a qualified supervisor as well as approval from the state’s board before an optometrist can be certified to perform laser procedures.

Educating ODs in laser use

Jared Powelson, OD, an instructor at the Southern College of Optometry in Memphis, spoke with Primary Care Optometry News about providing laser education to students.

“We teach every ophthalmic laser procedure that is done; we cover it as far as the preop, the laser settings and the postop management,” he explained in an interview. “As far as hands-on training, we focus more on YAG capsulotomy, selective laser trabeculoplasty (SLT) and also peripheral iridotomy procedures.

“The classes that we teach are not laser certification courses,” Powelson continued. “If they want to have that privilege, they would have to go above and beyond the training that they get in school and also their internships, externships and residencies. They have to take an additional certification course in order to get certified to actually use a laser on a patient.”

In Kentucky and Oklahoma, patients are reaping the rewards, especially as patient need is increasing due to the implementation of the Affordable Care Act, practioners say.

“There was a time before our law went into effect in Kentucky that my patients were having to wait anywhere from 6 to 8 weeks from the time I diagnosed their condition to when they were actually able to have the procedure,” John Heltsley, OD, told PCON. “With this law, that wait time has gone way down because I’m doing it in my own office. Patients don’t have to leave my office. They don’t have to make another trip to see another doctor. And these are not only my patients; I have some optometry colleagues that will refer patients to me from surrounding counties. In a case like that, when the patient is having to travel a fairly significant distance, we save the patient time and money with travel back and forth as opposed to the previous option.”

Patients appreciate the additional benefits that come along with an expanded scope of practice for optometry, added Heltsley.

“They are all very appreciative of the fact that we offer that service now and they like the continuity of care they receive,” he said. “Most of them are preexisting patients of mine, and when we tell them what their diagnosis is and what they need, they really appreciate not having to be referred out somewhere else.

“Typically, before we were performing these procedures in our office, we would have to make the patient an appointment for a consultation with the ophthalmologist and, basically, that consultation was the same thing that we had just done in our office,” Heltsley explained. “Then, they wouldn’t treat the patient the same day. They would make them come back on a different day, so there was a lot of delay and repetition of procedures. Now it’s a win for the patients.”

Even for optometrists who cannot or choose not to utilize laser privileges within their practices, the knowledge is proving powerful. PCON Editorial Board member Ryan Parker, OD, is certified to provide laser procedures in Oklahoma but refers patients that need surgery to a nearby ophthalmologist.

“I took the classes just so I could practice to the maximum scope of my license in Oklahoma,” Parker told PCON. “And the other reason I took them is so I could be a better comanager of these conditions. For instance, I refer most of my refractive surgery patients out … but because I’ve taken the class, I know how to do the procedure, so I can comanage quite a bit better than I was able to before.”

While many doctors are taking advantage of the benefits that laser licensure allows, some, like Parker, are not. There are a variety of reasons for this, one of which is cost, he said.

“It’s not cost effective to have one laser in my office when there’s one down the street that I can send my patients to,” Parker said.

“My day is filled with glasses and contact lenses and surgery comanagement,” he said. “It comes down to the issue of cost. How do you know when you have a big enough patient demand to invest in this equipment?”

The cost of lasers can involve tens of thousands of dollars.

Heltsley, who purchased his equipment 2 years ago, told PCON that new YAG lasers started around $20,000, and used SLT lasers are around $25,000 now that patents have expired. Additional lenses are relatively inexpensive, he said, and cost about $1,000 for all of the lenses one might need for the lasers.

Although Parker does not currently provide laser treatments, he hopes to practice to the full extent of his license in the future.

“I knew I probably wasn’t going to use it that much, but I didn’t want to let the ability to get licensed go away,” he said. “Mainly, it came down to the fact that I think someday the lasers are going to be more cost effective, have a much smaller footprint and probably make a lot more sense to have in a primary care optometric setting.”

“There is absolutely no difference now since our law has been in place compared to before,” Heltsley said. “From my standpoint, it’s actually made it easier. There were times in the past where we wanted to get patients in quickly, especially in the case of a YAG peripheral iridotomy, where some cases are emergent, sometimes not during office hours. Since I have a YAG laser in my office, I don’t have to make extra phone calls and wait longer. That’s actually helped us out because we’re not trying to fit another patient into an ophthalmologist’s office when they’re already really busy.”

“It makes a world of difference when it comes to the comanagement of the patients when you know how to do the procedure, you’ve done the procedure and you know what to look for,” Parker explained.

“Even if a student goes to a state where they don’t have his laser privileges, he can still use all the experience and knowledge acquired during the didactic education – the internships, externships, residency,” Powelson said. “Even if they’re not actually using the laser, they’re still performing the pre-laser management of the patient as well as the postoperative care, so it helps them comanage that patient with ophthalmology at the highest level.”

A history of expanding scope of practice

The optometrists who spoke with PCON were all quick to agree that the rest of the country should follow in Oklahoma and Kentucky’s footsteps in allowing the profession to practice with an expanded scope.

“If optometrists have the appropriate training, there is no reason for them not to be able to perform laser procedures,” Heltsley said.

“With the Affordable Care Act, it is a given that all health care providers must practice to their fullest ability in order for everyone to be able to obtain the care they need,” Powelson said. “Medical school is not the only avenue to clinical knowledge and developing clinical skills.”

“I’m a huge proponent of every state being able to maximize their scope of practice and to keep pushing the envelope as far as expanding laws – it all comes down to the patient’s access to care,” Parker said. “These procedures, once you have the education, are very safe, they’re very effective, they’re very learnable by both ophthalmologists and optometrists and can be performed by either profession with the same skill and level of expertise.”

These arguments are nothing new.

“Some ophthalmologists aren’t aware of [our] capabilities,” Daniel Tiller, OD, told PCON in 1996 when discussing performing PRK in Idaho. “In the past 10 years, we have advanced light-years in the use of pharmaceutical and therapeutic agents.

“I don’t really think it matters whether you are an MD or OD. It’s whether you are willing to go through all the certification classes and necessary education,” he said in the interview. “It shouldn’t matter what your degree is.”

More states, including Nebraska, are currently fighting for licensing rights. It is a trend that is bound to continue as more optometry students receive laser education and ultimately practice in states that do not allow them to utilize their education.

“The more students who receive training and education on these procedures, the greater the demand to use these procedures in practice will be,” Parker said. “When students graduate, their energy and passion for the profession is at a very high level, so it is a great time to form relationships with state lawmakers and show these lawmakers the benefits of having laser procedures covered in that state’s scope of practice.

“If other states look at our track record in Oklahoma, they’ll see that the complications are miniscule,” Parker continued. “I have a great license and so do a lot of my colleagues in the state of Oklahoma, and our professional liability insurance really hasn’t increased because of that.”

Ultimately, amidst ongoing legislative battles, optometrists just want to provide the best care for their patients.

“We have a unique skill set and, with the appropriate training, it makes all the sense in the world for optometry to be providing these procedures to their patients,” Heltsley said. “The patients want it. They need it.” – by Chelsea Frajerman