A 14-year-old male presented for his annual eye examination with a history of congenital nystagmus and compound myopic astigmatism in both eyes. His mother reported that he was followed regularly by a pediatric eye specialist and diagnosed with strabismic amblyopia in the left eye. Patching therapy was employed but was unsuccessful.

The boy’s systemic history was positive for Tourette’s syndrome, for which he was medicated. His family ocular history was unremarkable. His mother reported a normal pregnancy and average birth weight. No known drug allergies were reported.

Manifest refraction measured as -0.75 D -1.75 D x 173 OD and -0.50 D -3.00 D x 015. Best-corrected visual acuity was 20/40 OD and 20/80 OS. Color vision testing with Ishihara color plates revealed no abnormality in either eye. Both random dot and gross stereopsis were absent. Cover testing revealed a 4-D esotropia in the left eye and torsional nystagmus in both eyes. Pupils were equal, round and reactive to light. Confrontation visual field testing was normal to finger counting in both eyes.

Physical examination revealed light blond hair and fair skin, much lighter in comparison to his mother. Upon questioning, it was revealed that the patient had two older siblings who were noted to have a darker complexion.

The term used to describe maculae in which the foveal pit is poorly demarcated is foveal hypoplasia. Clinically it has been associated with numerous ocular and systemic comorbidities. Poor visual acuity ranging from 20/20 to 20/400 has been documented and depends on the varying degrees of cone absence.

Conditions to consider in the differential diagnosis of foveal hypoplasia include: albinism, aniridia, nanophthalmos, incontinentia pigmenti, prematurity, retinopathy of prematurity and idiopathic foveal hypoplasia. Given the patient’s physical appearance and ocular findings, albinism was highly suspected.

Melanin is crucial for maturation of the developing neural retina. It is postulated that abnormal tyrosinase, responsible for melanin synthesis, results in a lack of dopaquinone and a thinner retina, with a reduced number of ipsilateral ganglion cells and rod photoreceptors. Interestingly, while cone cells are developing during a similar time frame; they are unaffected. This highlights the theory of melanin-specific cell development, which is under further investigation.

While variable ocular findings exist in all forms of albinism, there are certain diagnostic features. From a clinical standpoint, the sine qua non of albinism includes misrouting of retinofugal fibers and foveal hypoplasia; nystagmus is a consistent finding in all forms of albinism but rarely may be absent. Abnormal decussation (crossed asymmetry) of pre-chiasmal fibers can be measured by visual evoked potential (VEP) studies and confirms the diagnosis of albinism. Foveal hypoplasia, similar to visual pathway misrouting, is a consistent finding in albinism and is characterized by the absence of a foveal pit, as demonstrated by light microscopy and OCT.

Nystagmus, a frequent finding in albinism, may exist in horizontal, vertical or torsional planes. Clinically, dampening of the nystagmus via convergence is likely to result in improved near vision. Likened to nystagmus, strabismus is thought to develop as a result of an anomalous visual pathway and is aggravated by decreased visual acuity and light sensitivity. While fine stereopsis is absent, gross dot stereopsis is functional in some albinotic individuals. Amblyopia is the final result of the aforementioned pathology and varies from one individual to the next.

The delay in visual maturation is thought to result from a lesion of the subcortical pathway, influencing time-dependent neuronal synapses, with visual function arising from the geniculostriate pathway, termed the “dual visual system” theory. The slow improvement of visual function among certain genotypes might be the result of the dual visual system, which remains controversial.

OCA is a term used to describe inherited forms of hypopigmentation associated with variable levels of pigment in the skin, hair and eyes. Patients are considered to have OCA if they have hypopigmentation of the skin along with iris transillumination defects and/or axon misrouting measured by VEP and/or visual deficits consistent with albinism, which may include nystagmus and/or foveal hypoplasia. The variability in phenotypic expression of the tyrosinase gene accounts for the degree of hypopigmentation and visual morbidity.

The tyrosinase test determines the amount of enzyme in the hairbulb. This divides OCA into two major groups: tyrosinase positive and tyrosinase negative. There are four types of OCA disorders, all of which are autosomal recessive in nature. OCA1 is characterized by complete or partial inhibition of tyrosinase and gives rise to four subtypes. These include OCA1a, OCA1b, minimal pigment albinism and temperature-dependent albinism. 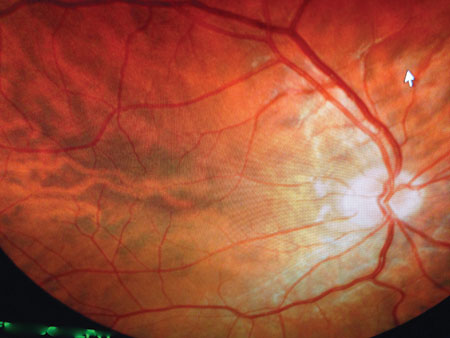 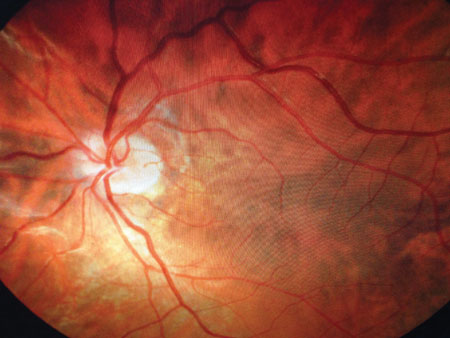 Individuals with OCA1a have white hair, white skin that does not tan and translucent irides. Best correctable visual acuity ranges between 20/100 and 20/400. OCA1b individuals have white or very light yellow hair that darkens minimally with age and white skin that over time develops some minimal generalized pigment and may tan slightly with sun exposure. Their blue irides may darken to green/hazel or light brown/tan with age; all subtypes have similar ocular manifestations.

The diagnosis of OCA1 is established by clinical findings of profound hypopigmentation of the skin and hair and characteristic ocular findings. OCA2 is caused by mutation at the P locus on chromosome 15q11.2-q12. Variability exists with regard to pigmentation and depends on race. Phenotypic melanin distribution exists in the development of pigmented nevi, freckles or lentigines, along with darkening of the hair with age. OCA2 (previously called P) is the only gene in which mutations are known to cause oculocutaneous albinism type 2.

OCA3 develops from a defect in TRP-1, in which the phenotypic expression is exclusively described in African and African-American individuals. It is characterized by light brown skin and hair, blue-gray irides and transillumination iris defects. The phenotype for OCA3 is a milder OCA in which affected individuals accumulate reddish pigment in their hair and skin.

OCA4 is characterized by hypopigmentation of the skin and hair plus the ocular characteristics of all other types of albinism. Vision typically stabilizes after early childhood, and the amount of cutaneous pigmentation ranges from minimal to near-normal. Hair color may darken with time but does not vary significantly from childhood to adulthood. This form of albinism is more common in the Japanese population. SLC45A2 is the only gene in which mutation is known to cause OCA4. Because OCA2 and OCA4 are phenotypically similar, it is not possible to diagnose OCA4 accurately only on clinical findings.

OA is a genetic condition that primarily affects the eyes. The hair and skin color do not markedly differ from normal, and tyrosinase test results are positive. Similar to OCA, ocular findings are variable but similar. 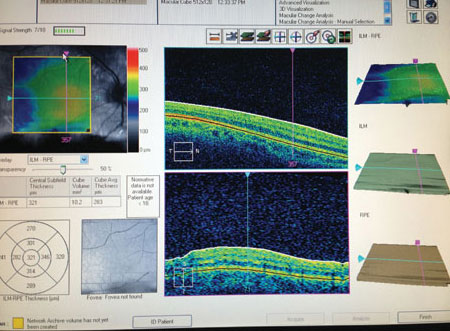 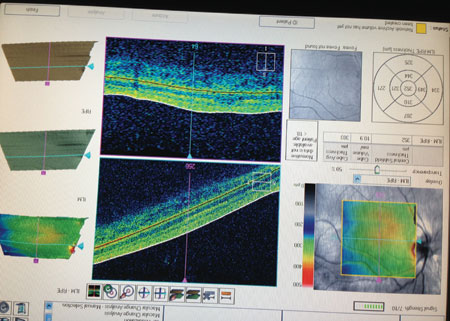 Optical coherence tomography confirmed the lack of foveal pit and discontinuity of the
photoreceptor integrity line.

People with this condition may have a somewhat fairer complexion than other members of their family. The most common form of OA is known as Nettleship-Falls type 1. It results from a mutation in the GPR143 gene, which signals melanin production in the eye and hair and is inherited in an X-linked pattern in males. Because females have two X chromosomes, the one mutated gene does not typically result in significant visual sequelae, but may present with mild retinal pigment changes. A diagnosis of OA is probable in the presence of ocular findings and via a family history consistent with X-linked inheritance or the presence of typical retinal findings in a female carrier. Molecular genetic testing of GPR143 detects mutations in more than 90% of affected males.

Finally, albinoidism is inherited as an autosomal dominant trait. The clinical features consist of abnormal iris transillumination and variable hypopigmentation of the fundus. The maculae are less severely affected or can be normal. Thus, nystagmus is uncommon, and visual acuity is typically unaffected.

For children, early ophthalmologic examination is important to identify refractive errors and avoid amblyopic development. Because many affected individuals experience photoaversion, sunglasses or special filters are of great value. Lastly, genetic counseling and testing is recommended and should be ascertained for identification of specific genotype and its potential effect on future progeny.

Albinism is a classic example that demonstrates the importance of physical and ocular examination. Without thorough observation of physical findings and meticulous history taking, misdiagnosis is possible. In this case, the absence of foveal pit and associated ocular findings were consistent with a presumptive diagnosis of ocular albinism. Ancillary testing with OCT and fundus photography allowed for structural visualization of the lack of both foveal pit and avascular zone. VEP however, still remains the standard for diagnostic certainty in distinguishing albinism from albinoid individuals and other equivocal cases. In this case, the patient and his mother were educated regarding the presumptive diagnosis of albinism and referred for VEP, genetic testing and low vision.