Irregular external limiting membrane may be biomarker for Stargardt’s

A thickened, irregular and hyper-reflective external limiting membrane could prove to be the earliest clinical indication of Stargardt’s disease, visible perhaps even as early as 4 years of age, according to a clinician.

An 8-year-old boy presented to Jerome Sherman, OD, FAAO, with progressive reduction of vision at distance and near in both eyes for nearly 3 years. The patient also had issues with color and night vision. His best corrected visual acuity was 20/200 in each eye.

Fundus photography revealed no unmistakable abnormalities; however, ultra-widefield autofluorescence (AF) images revealed clear abnormalities in the form of a central hypo-AF oval in each eye, encircled by a large hyper-AF zone containing bright hyper-AF spots or flecks, according to Sherman. 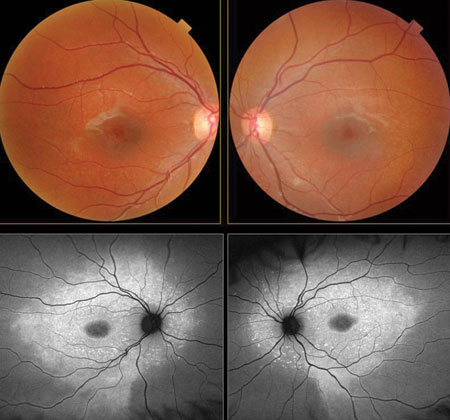 A comparison of the 8-year-old’s standard fundus photos to AF images shows abnormalities in the AF images only. Note that the small hyper-AF lesions are often not round and many are fish tail or pisciform in shape, suggesting perhaps the fish tail lesions in Stargardt’s disease with fundus flavimaculatus.

Spectral-domain optical coherence tomography (SD-OCT) imaging revealed a thinning macula, a nonexistent photoreceptor integrity line (PIL) and extreme thinning of the fovea in all horizontal OCT sections in each eye, according to Sherman.

“Although the fundus photo displays only mild abnormalities, the SD-OCTs are quite abnormal,” Sherman said.

Therefore, the combination of AF and SD-OCT findings suggests a probable diagnosis of Stargardt’s disease with fundus flavimaculatus, he said. Genetic testing later confirmed the diagnosis.

The patient’s mother and father were both present at the time of the consult, along with the patient’s two younger sisters, 4 and 5 years old, all of whom Sherman was able to scan.

The 8-year-old’s SD-OCT and fundus photo above are compared to those of a normal patient below. Note the macula thinning in the 8-year-old’s OCT. Also note the absence of the PIL. It appears that his outer retina is collapsing onto the retinal pigment epithelium in the entire central zone. The PIL is somewhat preserved outside the macula. The PIL should be present in the entire scan, as shown in the normal scan below.

Both parents had normal visual acuity, normal fundus exams and normal OCTs; however, Sherman noted abnormalities in the two sisters.

The 5-year-old sister had no symptoms and her fundus images were normal; her best corrected visual acuity was 20/25 in each eye, but the AF images revealed a subtle hypo-AF oval ringed by a small hyper-AF zone around the macula of each eye. The AF images were also largely symmetrical, Sherman said.

“Her ultra-widefield autofluorescence result was abnormal, but it wasn’t quite as abnormal as her 8-year-old brother,” he said. “More striking, though, was that the spectral-domain OCT clearly showed something very abnormal, which was a thickened, irregular, hyper-reflective membrane in both eyes.”

Sherman found no symptoms in the 4-year-old sister.

“Her best corrected visual acuity was about 20/25 as well,” he said. “Her ultra-widefield AF images were sort of borderline. I couldn’t convince myself that they were really abnormal. But on SD-OCT, she clearly also had this very unusual hyper-reflective ELM [external limiting membrane]. As a general rule, the PIL is five to 10 times as bright or hyper-reflective as the ELM; but in the two youngsters, the ELM was far easier to see, far brighter and far more hyper-reflective than the PIL.”

In contrast to her brother, the 5-year-old sister has all retinal layers, although the PIL is somewhat attenuated. Remarkably, the ELM is thickened, irregular and grossly hyperreflective. In normal patients, the ELM is subtle and perhaps a fifth to a tenth as thick and reflective as the PIL. In this eye, the ELM is clearly thicker and more reflective. The abnormal ELM is most marked in the macula. A normal OCT is included below for comparison.

This apparent thickening of the ELM, as seen in the SD-OCT images, is likely due to a buildup of cellular debris from degenerating nuclei of the cones and rods, according to Sherman.

Stargardt’s disease typically has an autosomal recessive inheritance pattern, Sherman said. Hence, the parents, who are clean of Stargardt’s, each likely had one abnormal gene, and all three children inherited it.

“There’s every reason to believe that the two sisters are developing the same problem that the brother has,” he said. “So we think we have a biomarker, at least in this family, for really early Stargardt’s disease. We’re finding evidence of it in other patients, as well, though, so we think it’s actually a biomarker across different families, maybe across all patients with Stargardt’s. But we’re not going to know that until we examine very large numbers.”

The advantage of having a biomarker for Stargardt’s, according to Sherman, is that clinicians could use it to make a much earlier diagnosis, and researchers could use it to aid in the development of early interventions, providing a means by which to monitor the efficacy of treatments.

The U.S. Food and Drug Administration approved the drug, ALK-001, from Alkeus Pharmaceuticals, for use in studies involving adult Stargardt’s patients, Sherman said.

“What’s most fascinating is that it might become possible to stop progression in the 8-year-old with this drug, as it has already been shown that it could prevent progression of the disease in Stargardt’s mice when treated early enough,” he said. “It’s a different form of vitamin A that has shown safety in animals and could, hopefully, be used in very young patients even before they become symptomatic, like the two sisters in this family.” – by Daniel R. Morgan