Cases of anterior blepharitis that do not resolve with antibiotics may actually be caused by Demodex mites, which are much more prevalent than generally thought. Demodex blepharitis presents similarly to that caused by bacteria, but the mites are unaffected by baby shampoo and other traditional treatments for blepharitis, according to experts.

“When we learned about Demodex in school, we blew through it very quickly,” Scott E. Schachter, OD, said in an interview with Primary Care Optometry News. “If you talk to most ODs about Demodex, they’ll tell you they’ve never seen it. But if you take a sample of any 100 people that walk in my door, between 20 and 25 will have blepharitis with Demodex.

“Most ODs will see blepharitis, think bacterial and treat it with antibiotics or baby shampoo and it never gets better,” Schachter continued. “It’s chronic. But they don’t check for Demodex, and Demodex needs to be treated differently. It’s an often overlooked and underdiagnosed condition.”

According to a recent case report series published in Optometry and Vision Science, Demodex folliculorum and Demodex brevis can be found in 20% to 80% of all people, the prevalence increasing with age.

“Not only does prevalence increase with age,” Milton M. Hom, OD, FAAO, and colleagues said in the study, “but the average number of Demodex per patient also increases.” 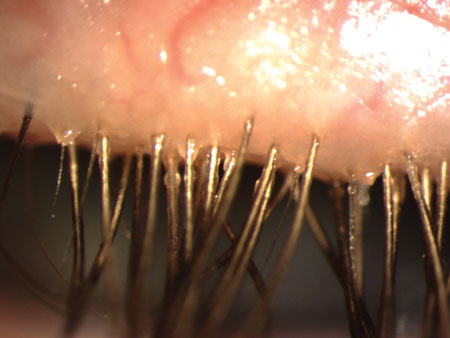 Many clinicians may treat Demodex blepharitis with antibiotic or baby shampoo, with no success. A tea tree oil product is the most effective treatment.

In fact, the ectoparasites have a prevalence of 100% once a patient reaches 70 years of age and older, according to the study.

“Every person in this age group is estimated to carry a colony of 1,000 to 2,000 mites,” the researchers said.

Mario Gutierrez, OD, FAAO, has found that his clinical experience corroborates this evidence.

“Clinically, I have not found any particular demographic to be associated with increased risk of Demodex infestation, even between the sexes, except for age. Although pediatric cases are not uncommon, I have found that the older a patient is, the more likely they will have Demodex infestations,” he told PCON in an interview. “It’s very frequently seen, if we really look for it.”

“Demodex mites are tiny,” Katherine Mastrota, OD, MS, FAAO, told PCON. “Most doctors won’t notice them or recognize them when they see them, but in fact, most people harbor some. When the population of Demodex goes unchecked, blepharitis can develop.” 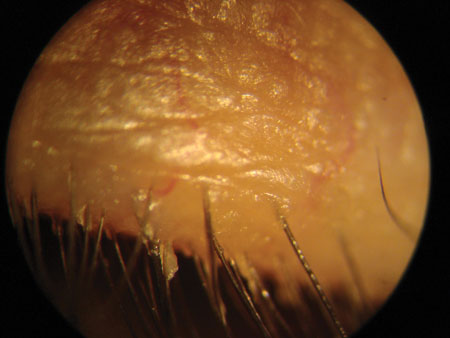 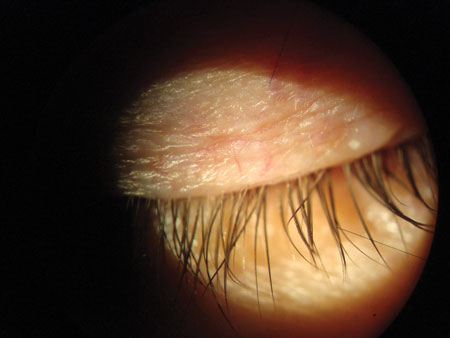 Demodex before treatment (top) and after (bottom).

Supporting this claim, a study published in Ophthalmic Epidemiology in 2012 found that meta-analysis can confirm the association between Demodex infestation and blepharitis.

According to the study results, the pooled odds ratio, used as the effect indicator, was 4.89, and the sensitivity analysis showed that the results of these pooled odds ratios in different effect models, language, sample size and control groups were completely consistent. This demonstrated a statistically significant association between Demodex and blepharitis.

“The conclusion implies that when conventional treatments for blepharitis fail, examination of Demodex mites and acaricidal therapy should be considered,” the study authors said.

While Demodex can cause the lid margin or lash line to become inflamed, similar to bacterial blepharitis, it is usually associated with cylindrical dandruff collarettes around the base of the hair follicle of eyelashes, according to Primary Care Optometry News Editorial Board member Scott G. Hauswirth, OD, FAAO. 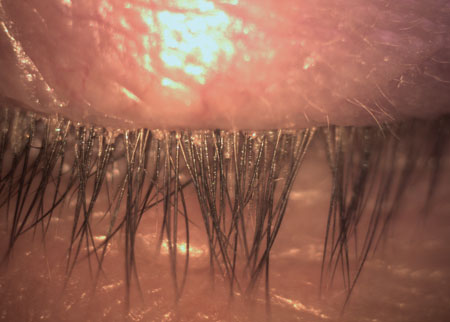 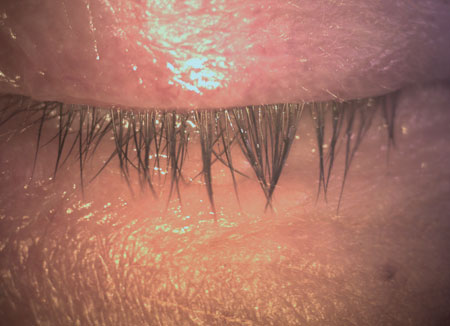 Severe cylindrical dandruff collarettes before treatment (top) and after (bottom).

“Cylindrical dandruff is a type of debris that coats the shaft of the lash, starting from the base and reaching up maybe half a millimeter or more with a waxy material, almost like dripping candle wax,” Hauswirth said in an interview with PCON. “The base of the lash follicle will look pouted up from the rest of the tissue, so instead of the normally flat area of skin surrounding the lash follicle, it will peak toward where the lash emerges.

“We have observed, though, that some infestations may still be present in patients who do not have a notable amount of cylindrical dandruff,” he said. 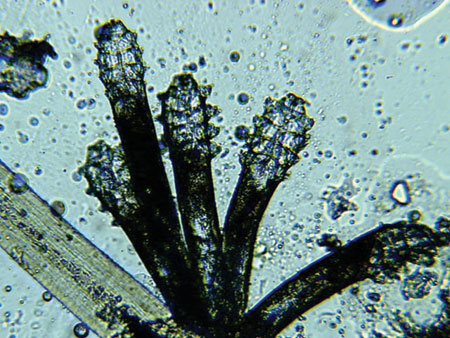 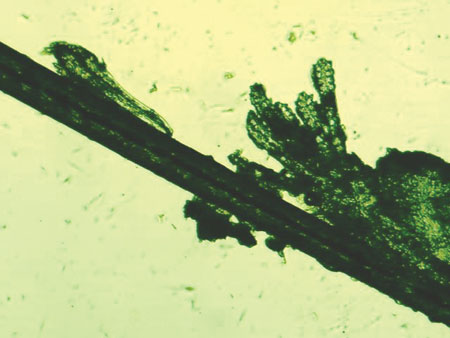 Mites can often be found on the face, and they make their way to the lashes, as shown here.

“Their eye tends to look a little redder, but patients aren’t always complaining,” he said. “They may not even realize they’ve been symptomatic until after treatment. It’s not an acute condition. It may take years to turn into infestation, so it may not create noticeable symptoms, but when you treat, these patients look and feel better.”

According to Hom and colleagues in the Optometry and Vision Science article, the sequence for diagnosing Demodex begins with the patient’s clinical history. Practitioners should have a high index of suspicion when anterior blepharitis, meibomian gland dysfunction, dry eye or ocular allergy is present.

Once there is suspicion, the clinician should perform a slit lamp examination, searching for cylindrical dandruff typical of Demodex at the root of the eyelashes.

If cylindrical dandruff is found, the diagnosis can be confirmed by microscope scrutiny, detecting and counting Demodex eggs, larvae and adult mites in epilated lashes, Hom said.

However, another method for confirming the diagnosis is currently being developed.

“Most professionals identify the Demodex organism in the eye by epilation of eyelashes and subsequent light microscope examination of the epilated lash for the mite,” Mastrota said. “I have been successful at identifying the mite without epilation, by rotating the lash within its follicle. The great thing about rotation is that you don’t need to epilate (epilation of lashes can be uncomfortable for patients), you don’t need a light microscope (which most doctors don’t have) and you don’t lose any mites in the process of epilation or transferring the lash to the microscope.

“Once you rotate and see them, you see them,” she said.

The most effective and commonly used treatment for Demodex is a compound utilizing the properties of tea tree oil, according to Mastrota. Office-based therapy can include eyelid treatment with the Demodex Convenience Kit (OcuSoft), which contains a proprietary tea tree oil solution and application brush, she said.

However, tea tree oil therapy has not been standardized and can cause dermatitis in sensitive individuals if overused, she added. 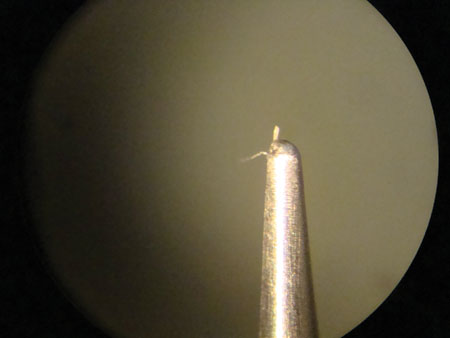 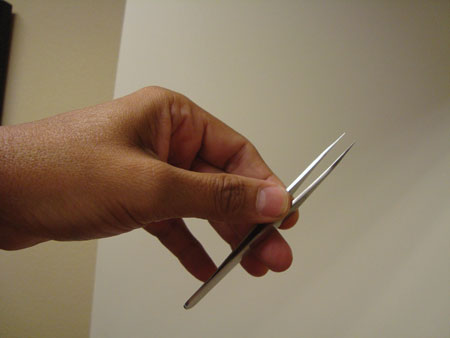 “In the past,” Gutierrez said, “I have diluted commercially available tea tree oil with either macadamia nut or walnut oil to make an in-office cocktail to help kill the mite. We have some really good commercially prepared tea tree-associated solutions now, so I don’t mix my own cocktail anymore.”

“I often add a drop of a nonsteroidal anti-inflammatory drug,” he said. “Next, the dandruff and collarettes should be removed with a brush or a cotton-tipped applicator and lid foam. Then, apply the tea tree isolate or mixture. Repeat this step.”

“I have found that most patients’ symptoms have resolved by this third visit, but I will treat them in-office anyway to hopefully finish off the majority of the Demodex infestation,” he said.

“I like the patients to keep using Cliradex at least a couple times a week for maintenance after this,” Gutierrez added. “Patients often comment on how good their eyes feel after treatment. Interestingly, even patients with Demodex blepharitis who were initially asymptomatic comment on how much better they feel posttreatment.” – by Daniel R. Morgan