A 55-year-old white female presented to our clinics for a comprehensive eye examination. Her ocular history was significant for a choroidal nevus in the right eye and a choroidal melanoma in the left eye, which had been treated and was being followed by an ocular oncologist. Her medical history was significant for hypothyroidism since 1991, for which she was taking levothyroxine.

Slit-lamp evaluation was unremarkable. Intraocular pressures were 12 mm Hg OD and OS. Examination of the retina revealed a large choroidal nevus in the right eye. A significant area of retinal edema with circinate exudates, blot hemorrhages, microaneurysms, fibrosis and neovascularization of the posterior pole was noted in the left eye. 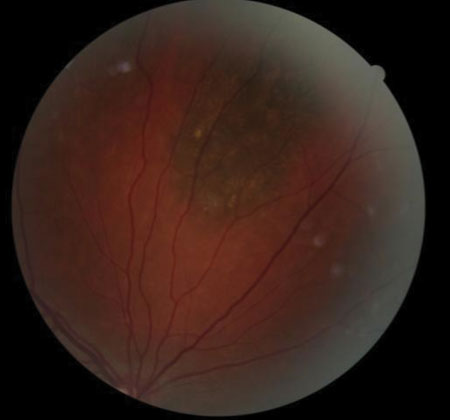 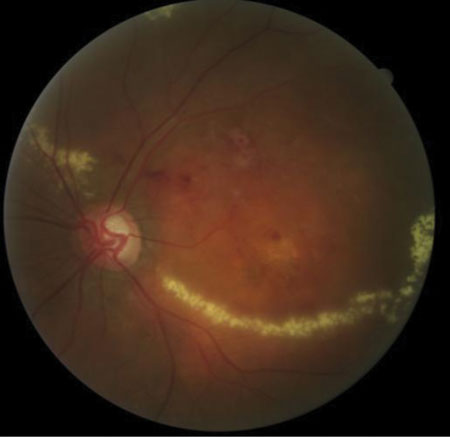 Upon further questioning, the patient reported a history of having multiple anti-vascular endothelial growth factor (anti-VEGF) injections post plaque brachytherapy radiation treatment of the choroidal melanoma 9 years ago. Based on the additional information, the clinical characteristic and location of the retinal changes, it was more likely the patient had radiation retinopathy in her left eye. The presence of a large nevus in the fellow eye required close monitoring.

Radiation therapy has a crucial role in the treatment of various disease processes and, similar to other therapeutics, sight-limiting side effects can occur. Secondary complications of radiotherapy can lead to keratopathy, cataract, glaucoma and radiation retinopathy.

Radiation retinopathy, first described by Stallard in 1933, occurs after exposure to any type of radiation. It can be divided into nonproliferative, proliferative and maculopathy. The presence of microaneurysms, hemorrhages, cotton-wool spots, hard exudates, retinal edema and/or vascular sheathing constitutes nonproliferative changes. Proliferative retinopathy is observed when retinal or disc neovascularization, vitreous hemorrhage or retinal detachment occurs. The presence of macular edema, as in this case, is the leading cause of vision loss.

Although not clearly understood, it is believed that exposure to radiation causes endothelial cell loss and capillary closure leading to an occlusive microangiography, according to Archer and colleagues. These findings are typically observed in the posterior pole of the retina, which is more sensitive to radiation, purportedly due to the increased number of capillaries and higher blood flow than the peripheral retina, Zamber and Kinyoun reported.

Patients may be asymptomatic if the retinopathy is mild, while those with advanced disease, as in our patient, can present with vision loss or floaters. Concomitant diseases such as diabetes, hypertension, collagen-vascular disease and concurrent chemotherapy are additional risk factors for the development of retinopathy and can exacerbate the retinal changes.

In rare instances, spontaneous improvement can occur. While currently no guidelines exist for radiation retinopathy, prompt treatment is essential to prevent irreversible visual loss. A recent classification has been devised by Finger and Kurli that describes stages of radiation retinopathy in relation to the clinical signs seen, symptoms, location, best method of visualization and the risk of vision loss, which may assist with determining the prognosis. 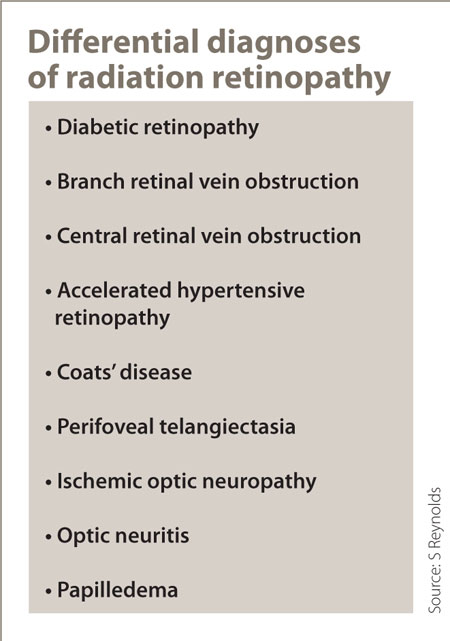 Management for this patient

Radiation retinopathy is a predictable complication of radiotherapy. Careful monitoring is critical after radiotherapy to prevent irreversible loss of vision. A careful history of any form of radiation therapy is also important in aiding with the diagnosis.

Postradiation evaluation should include evaluation of tumor response, careful monitoring of the fellow eye and consideration of metastatic disease. Counseling patients of the potential ocular complications should be offered in all cases. Early diagnosis and prompt treatment are crucial to preventing deterioration of vision.

Sherrol A. Reynolds OD, FAAO, is an associate professor at Nova Southeastern University College of Optometry. She can be reached at (954) 262-1442; sreynold@nova.edu.
Edited by Leo P. Semes, OD, FAAO, a professor of optometry, University of Alabama at Birmingham and a member of the Primary Care Optometry News Editorial Board. He may be reached at 1716 University Blvd., Birmingham, AL 35294-0010; (205) 934-6773; lsemes@uab.edu.