Patients will often fail to see the relevance of mentioning nonocular medications or allergies to their optometrist.

Whether determining what to prescribe a patient or interpreting a symptom, it is imperative for optometrists to be knowledgeable of not only the possible ocular side effects of oral agents, but also the systemic environment of the patient.

“It’s critical to understand a patient’s global systemic sensitivities,” J. James Thimons, OD, Primary Care Optometry News Editorial Board member, said in an interview. “It’s your role as the clinician to help the patient successfully navigate all the potential side effects associated with oral drugs, because, quite frankly, there’s very little knowledge on the part of patients about medications, and their ability to understand the complexity of interactions is extremely limited.

“Also, if patients are taking over-the-counter medications and don’t tell their doctors, it can be very difficult for doctors to have a good sense of whether the patient’s disease is worsening or whether there’s a medication-induced problem,” Thimons said. “OTC agents are frequently viewed by patients as benign but they can have significant effects on normal ocular function.”

Antihistamines, decongestants and antidepressants can all cause dry eye and blurred vision, she said in an interview.

Thimons said between 10% and 15% of patients on oral anti-allergy medications have some increase in ocular surface symptoms. In contact lens patients, it will frequently “push them over the edge” for comfort of wear, he said.

Flomax can cause floppy iris syndrome, Autry said, which results from a systemic alpha receptor blockade that also influences alpha receptors on the iris dilator muscle. This, in turn, causes poor dilation, a floppy iris that billows during cataract surgery and the possibility of iris prolapse into the incision site during surgery. This can be detrimental to a good surgical outcome, especially in cases where the surgeon is unprepared or inexperienced with the syndrome.

“Corticosteroids decrease aqueous outflow, which can result in increased intraocular pressure. This is especially true in patients who already have glaucoma or ocular hypertension, and the rise in IOP can be severe in these patients,” Autry said.

Most severe side effects

The oral drugs that have the most serious ocular side effects include corticosteroids, Plaquenil (hydroxychloroquine, Sanofi-Aventis), amiodarone, tamoxifen, ethambutol and erectile dysfunction medications such as Viagra (sildenafil citrate, Pfizer) and Cialis (tadalafil, Eli Lilly), according to PCON Editorial Board member Bruce E. Onofrey, OD, RPh.

“These all have the potential to produce permanent vision loss,” he said in an interview. “Probably at the top of my list would be Plaquenil, because of its common use and fairly predictable incidence of vision loss.

“The most common side effect of Plaquenil is central vision loss that can result in total loss, specifically a drop of acuity at the 20/200 to 20/400 level,” Onofrey continued.

Plaquenil has an affinity for melanin, and the highest concentration of melanin in the body is in the retinal pigment epithelium. Here it can produce a specific toxicity to the parafoveal and the foveal area resulting in bull’s eye maculopathy, which can cause significant vision loss, he said. 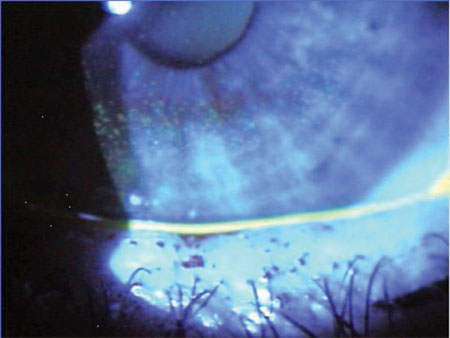 Antihistamines, decongestants and antidepressants can all cause dry eye.

With Viagra and other erectile dysfunction drugs, he said, the most common side effect is changes in color vision, shifting towards blue, Onofrey said. There can also be an episode of temporary vision loss, similar to a transient ischemic attack episode. This is essentially a hypotensive event, with blood pressure dropping to the point of losing perfusion to the optic nerve that would mimic nonarteritic ischemic optic neuropathy.

“Corticosteroids are notorious in any form and can cause secondary open-angle glaucoma, or steroid glaucoma. Elevation of intraocular pressure that could mimic open-angle glaucoma can result in visual field loss and potential blindness,” he continued.

Tamoxifen, used for the prevention of breast cancer, deposits in many areas of the eye, causing detrimental effects such as macular edema, Onofrey said. Clinicians can detect tamoxifen toxicity by running an optical coherence tomography scan and looking for high densities of crystalline deposits in the macula, he added.

“Ethambutol, as well as the commonly used anti-arrhythmic agent, amiodarone, can produce toxic optic neuropathy that can result in significant vision loss,” he continued. “It is critical that the clinician establish the proper testing protocols and scheduling of visits that ensure that toxic ocular side effects are detected prior to any significant loss of vision. It is also critical that the patient’s prescriber is made aware of the need to monitor these adverse effects as well as the results of the examination to ensure that they can either alter the dose or change the patient’s therapy to prevent loss of vision, while still treating the patient’s primary disease state.”

Autry also urged caution in recommending discontinuation of prescribed medications without discussing the risk of doing so with the prescriber.

“For example, telling a female patient that her long-term antidepressant could be worsening her dry eye could prompt her to abruptly discontinue this medication, which can have severe repercussions,” she said. – by Daniel R. Morgan