A 31-year-old Asian Indian female was referred because of unexplained vision loss in both eyes with a tentative diagnosis of “possible bilateral amblyopia without pathology.” She initially presented with a history of decreased vision in both eyes for as long as she could remember, but at least since 12 years of age. She reported having had extensive work-ups in India, which had included “brain scans,” but all the doctors she had seen, including eye doctors in the U.S., were unable to determine the etiology of her vision loss.

The patient’s eye health history was negative for ocular trauma or strabismus. Her health history was negative for systemic disease. She was taking no medications and had no history of toxic medication use. The patient was an only child and there was no known history of any similar eye problems in her family. She reported having difficulty distinguishing red colors on a computer screen.

Our examination revealed a BCVA of 20/60 OD through +0.50 and 20/40 OS through plano -0.25 x 005. External examination of the eyes revealed clear corneas and irides and minute congenital lens opacities in both eyes. Anterior chambers were deep and clear. Intraocular pressures were 11 mm Hg in each eye. Pupillary reactions were sluggish, but there was no noted afferent pupillary defect. Testing of color vision with Ishihara plates revealed no defects; the patient was able to correctly identify 11/11 plates when each eye was tested separately, although she complained of a red color deficiency when using her computer.

Fundus photos of a 31-year-old patient with
decreased vision.

The fundus photos are shown. The 30-degree visual field was repeated, which was again noted to be full.

When any patient presents with unexplainable vision loss, additional testing procedures are often indicated when the answers are not readily available following a comprehensive eye examination and automated 30-degree visual field testing, as in this case. Although two prior clinicians assessed the fundus as being normal, closer examination reveals a small area of temporal pallor, less than 1 clock hour on the temporal border of the right optic nerve head, and a larger area of pallor on the temporal border of the left optic nerve head. Temporal pallor is sometimes more evident on fundus photos than on fundus examination. The next step was to obtain a spectral domain optical coherence tomography of the macula and retinal nerve fiber layer to determine if there were any structural abnormalities that could cause reduction in vision. 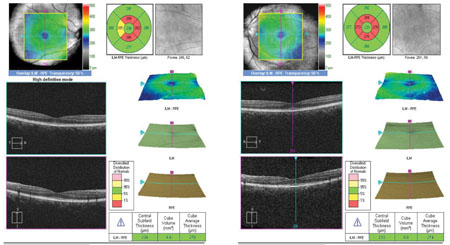 The next step is to determine if we can perform a test of visual function that will give us more information about the papillomacular bundle and central retina. A 10-degree visual field test is optimal for that information. The M program of the Octopus perimeter (Haag Streit, Mason, Ohio) is a central visual field test that measures the central 10 degrees with a great deal of detail. Points are tested 0.7 degrees apart in the central 4 degrees. The patient’s results are shown. Central-seco scotomas were evident in both eyes, with the loss extending into both foveas. That corresponds with the patient’s reduction in visual acuity

The patient had already had an extensive work-up over the years, including “brain scans” and blood work, with no change in her visual status for as long as she could remember. Although there was no family history as reported by the patient (older family members were unavailable for examination and the patient had no siblings or children), it is most likely this patient has a form of a primary hereditary optic neuropathy. 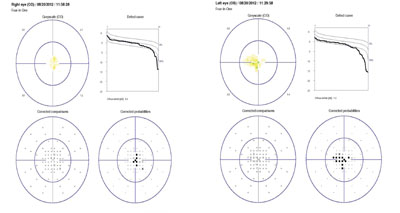 Central scotomas were evident in both eyes, and the loss extended into both foveas. That corresponds with the patient’s reduction in visual acuity.

The most common of the inherited optic neuropathies is autosomal dominant optic atrophy (ADOA), also known as Kjer type (named after the Danish ophthalmologist Poul Kjer) and LHON. The other forms are rare and associated with more severe vision loss from birth, nystagmus, hearing loss, diffuse temporal pallor and multisystem disorders. 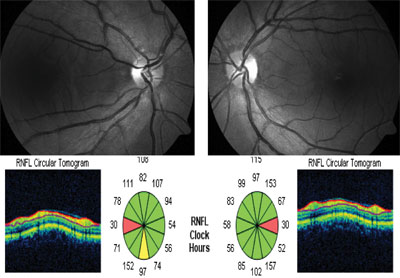 Based on our patient’s symptoms, age of onset and clinical characteristics, we believe she has ADOA despite the absence of a reported family history. The prevalence of ADOA ranges from 1 in 10,000 to 1 in 50,000 people worldwide, according to Orssaud. The clinical features of ADOA include reduced visual acuity, central scotomas, color vision defect and temporal pallor of the disc. Visual acuity ranges from 20/20 to 20/200 in the majority of patients and, although reductions in visual acuity occur between 4 years and 6 years of age, visual symptoms may not occur until later in life due to the slowly progressive nature of this disease. About 60% of patients with ADOA have mutations in the optic atrophy 1 gene (OPA1), with a lesser number of pedigrees having mutations in the OPA3 gene, report Yu-Wai-Man et al. These genes produce an Msp1 protein used to maintain mitochondrial DNA. Mutations in these genes are believed to induce changes in mitochondrial structure that eventually lead to a loss of the ganglion cells. The patient had a long-standing complaint emanating from childhood and had been extensively worked up, which had included blood testing and neuroimaging. In addition, there was nothing in the history that suggested a toxic etiology.

Molecular genetic testing can be helpful in diagnosing autosomal dominant optic atrophy. Testing currently exists to detect mutations on the OPA1 and OPA3 genes. As mentioned, even without a noted family history, this patient may still have an autosomal dominant optic atrophy. There are ways to order genetic testing free of charge using EyeGene (http://www.nei.nih.gov/resources/eyegene.asp), which is a federally sponsored project to obtain genetic information and establish phenotypic-genotypic correlations for a multitude of inherited eye diseases or through commercial laboratories, for a fee, when results are needed more quickly. Our patient is currently considering genetic testing.

It is unfortunate for the patient that no one had an etiology for her visual loss, and it took more than 30 years for her to learn that she had some form of inherited optic neuropathy. This will be important in providing information about prognosis and family planning. 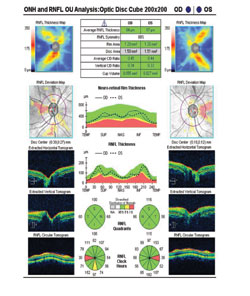 These clock sectors correspond to the RNFL thickness of the papillomacular bundle.

This is definitely not bilateral amblyopia without pathology. There are no amblyogenic factors here, namely an uncorrected high isometropia (greater than -8.00 D for myopia, greater than +6.00 D for hyperopia and greater than -2.50 D of astigmatism, according to the AOA Clinical Practice Guidelines). This patient had a low refractive error in both eyes. Before diagnosing amblyopia, perform SD-OCT of the macula and RNFL to rule out structural abnormalities that could affect vision and 10-degree visual fields to rule out central scotomas affecting foveal function.

Ian L. Bailey, OD, MS, DSc(hc), FCOptom, FAAO, can be reached at the University of California, Berkeley, School of Optometry, 415 Minor Hall Berkeley, CA 94720-2020; (510) 642-1987; ibailey@berkeley.edu.
Sherry J. Bass, OD, FAAO, is a distinguished teaching professor at the State University of New York State College of Optometry. She can be reached at 33 West 42nd St., New York, NY 10036; (212) 938-5865; sbass@sunyopt.edu.
Disclosure: Bass has received honorarium and travel expenses from Haag-Streit.
ADD TOPIC TO EMAIL ALERTS
Receive an email when new articles are posted on
Please provide your email address to receive an email when new articles are posted on .
ADDED TO EMAIL ALERTS
You've successfully added to your alerts. You will receive an email when new content is published.