Although there are many factors that can cause a fall, poor vision is foremost among them. Patients with significant visual impairment need special attention from their eye care providers to help preserve their physical health.

“Our vision becomes poorer as we age, just like other organs of the body, because of wear and tear,” Susana T. L. Chung, OD, PhD, FAAO, associate professor of optometry and vision science at the University of California – Berkeley, said.

“Our metabolic rate may change, and the rate of getting rid of metabolic waste may decrease, resulting in accumulation of toxins. The prevalence of eye diseases that can cause blindness, such as age-related macular degeneration, glaucoma, diabetic retinopathy and cataracts, also increases with age,” she told Primary Care Optometry News in an interview.

Of course, age also increases the risk for disorders whose pathology is not related to the eyes, such as strokes, and a stroke can lead to significant visual field loss, Chung said.

Chung received the Glenn A. Fry Award at the American Academy of Optometry annual meeting for her work regarding plasticity in cases of central vision loss and spoke on this topic at the meeting. 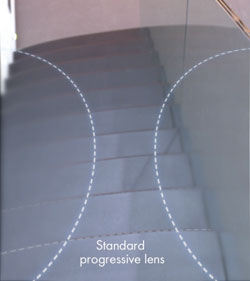 Clinicians should be aware that some multifocal spectacle lenses may distort patients’ vision when they walk down stairs, thus increasing the risk of falls.Source:

“There are multiple processes through which vision gets poorer with age,” Rosemary Browne, MD, FACP, associate professor of medicine in the Section of Geriatrics, General Medicine and Palliative Medicine at the University of Arizona, said in an interview with PCON. “Some processes are the result of normal aging, and others are related to diseases that can affect vision. Of these diseases, some are specific to the eye, and others reflect systemic illness that affects the eye as well.”

“In addition to changes in [spectacle] prescription, which can all be corrected, changes in your eye, including cataract-induced light scatter by the lens and decreases in pupil size, make it more difficult to see low contrast objects, to see in the presence of glare and to see under conditions of reduced light level,” Gunilla Haegerstrom-Portnoy, OD, PhD, FAAO, professor of optometry and vision science at the University of California Berkeley, said in an interview with PCON. “These changes in the eye will occur in everyone to different extents and are considered pathologic only if lens clouding is significant enough to be a cataract.”

According to Susan J. Leat, PhD, FCOptom, FAAO, professor at the School of Optometry and Vision Science at the University of Waterloo, there are two primary areas where vision can become impaired due to age: optics and neural function.

“Contrast sensitivity for static medium and high frequency gratings is more affected by the optics of the eye, as is color perception when the blue end of the spectrum is lost with the yellowing of the lens and development of the cataract,” Leat told PCON. “On the other hand, scotopic functions and dark adaptation seem to be more affected by neural changes.”

Falls are not random events, David B. Elliott, BScOptom, PhD, MCOptom, FAAO, wrote in a paper recently published in Optometry in Practice. Elliott is a professor of clinical vision science at the Bradford School of Optometry and Vision Sciences in Bradford, U.K.

“Approximately one-third of community-dwelling, healthy adults aged 65 years and older fall at least once a year, with up to half of these people experiencing multiple falls,” he wrote.

“Etiologies of falling are divided into two groups: intrinsic, or physiological, and extrinsic, or environmental,” Browne said in an interview. “Intrinsic etiologies are numerous and reflect the health of the patient, with issues such as muscle weakness, balance problems and neurologic conditions. Visual problems would come under this category. Extrinsic factors are found in the environment and might include such things as slippery surfaces, loose rugs, uneven flooring, poor footwear or inadequate lighting.”

“We know that poor vision is a factor in falls,” Leat said.

Reduced visual acuity, reduced contrast sensitivity, poor stereopsis and visual field loss, especially in the lower visual field, are all related to an increase in fall risk. In fact, poor visual acuity increases the risk of falls by 1.5 to 2 times, she said.

“We also know that in older adults there is less input from the vestibular and proprioreceptor systems,” Leat said, “which is a major way we maintain balance.” 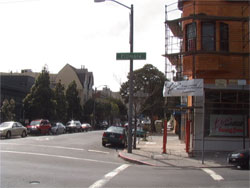 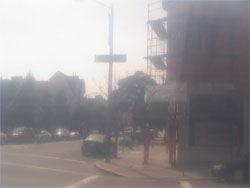 The image on the bottom depicts how the street scene on the top would be seen to an older person with reduced contrast sensitivity.

The loss of this function causes older adults to rely more on visual input, she said.

“Thus, once vision is also compromised, they will sway more and be more prone to falling, as a result,” Leat said.

Color vision changes, such as blue-yellow color vision defects, can make it more difficult to judge pastel colors, which can impact how we discriminate between objects, Haegerstrom-Portnoy told PCON. More importantly, however, other changes in the eye can hinder daily function significantly by increasing sensitivity to glare, eliminating depth perception and slowing adaptation to changes in environmental brightness, such as when driving into a tunnel.

Also, older people with visual impairment may not be fully aware how subtler forms of impairment, such as deficits in peripheral vision and depth perception, contribute to accident occurrence and avoidance. Byoung-Sun Chu, of the Catholic University of Daegu in Korea, and colleagues presented a study on this topic in a poster at the American Academy of Optometry annual meeting.

The study was designed to understand the mechanisms of accident causation and prevention according to the perception by adults older than 65 years with visual impairment. The researchers followed 14 normal and 70 vision-impaired subjects for 2 months using concept mapping, a technique that illustrates how people explain relationships between various concepts, to analyze diary data of accidents or near miss occurrences as recorded by each of the participants.

According to the results, participants with visual impairment due to glaucoma and AMD classified 74% to 81% of incidents as being vision-related, while those with cataracts only classified 36% of incidents as such. The majority of participants generally considered impairments in light adaptation, contrast, refraction and central visual fields as the primary causes for incidents, but not deficits in peripheral visual fields or depth perception.

“Epidemiological studies,” according to Elliott’s paper in Optometry in Practice, “have shown that falls are typically multifactorial and are linked to intrinsic risk factors that include increasing age, female gender, lower-limb disabilities, impaired muscle strength, hypotension, stroke, arthritis, diabetes, cognitive impairment, Parkinson’s disease, visual impairment, sedative use, taking more than four prescription medications per day and a having a history of falls.”

Other factors suggesting a high risk for falls, according to Elliott’s paper, include Meniere’s disease, dementia, taking sedatives or antidepressants and living alone. Of course, the more risk factors relevant to the patient, the greater the risk of a fall.

The role of the optometrist

The optometrist should be able to provide sound advice based on information gathered in the clinical setting, according to Leat.

“Optometrists should ensure the patient’s spectacles are up to date and that their vision is optimized, and that any ocular disease present is diagnosed and treated. For example, don’t put a patient at risk for falls into multifocals for the first time, and be hesitant to make large changes to their current style of lenses,” Leat said. “Re-educate them about not looking through the bifocal segment of their glasses when they walk, especially going up and down stairs, and about not walking around in reading glasses, which tends to be a common thing.”

“Regular eye exams are very important,” Chung said. “Primary care optometrists should make sure they measure not only visual acuity, but also contrast sensitivity and visual field — and even better, all of these aspects under high and low light levels. This way, they’ll have a much better idea as to what a patient can or cannot see, especially at low light levels.

According to Haegerstrom-Portnoy, “Even though this is not standard of care, optometrists should measure some low contrast vision function and, if that function is poor, alert the person to the conditions where they may not see all that well. Such conditions would include low light levels, glare and surroundings with a lot of change in the level of light.”

“There is adequate evidence,” Browne said, “that early treatment of refractive error, cataracts and AMD improves or prevents loss of visual acuity; however, there is inadequate evidence that screening older adults for visual impairment improves functional outcomes. Medicare and many private insurance companies do not cover annual comprehensive eye exams [in the U.S.] as a result and provide limited coverage for spectacles, as well. The cost of preventive eye care then falls directly on the older adult. It is, therefore, important to become familiar with the benefits available to your older patients and to assist them in navigating the system.”

Also, improving optometric services to people in residential and nursing care would be beneficial, as they are a particularly high-risk group for falls, Elliott wrote in his paper.

Potential interventions to reduce risk of falling include home safety modifications, such as removing or changing loose floor mats; painting the edge of outside steps; reducing glare; installing grab bars and stair rails; removing clutter and improving lighting; and a home exercise program with vitamin D supplementation, according to Elliott’s paper.

“Optometrists just need to ask appropriate questions, questions that they might not routinely ask at the moment, to determine fall risk and prescribe appropriately, and also to counsel and refer appropriately,” Elliott said in an interview with PCON.

“It is important to find out when glasses are actually worn,” he continued. “Ask elderly patients whether they always wear their distance glasses when walking outside the home. Ask bifocal or progressive lens wearers whether they have any problems with steps and stairs. Do they take off their bifocals or progressive lenses when negotiating stairs?”

Patients at moderate to high risk of falling should be more closely managed, according to Elliott.

“Suggest more regular eye exams and early referral for first-eye cataract surgery as appropriate and advise at-risk patients to keep their distance glasses on if they tend to remove them when walking outside the home, as this could reduce fall risk,” he said

Any change in prescription for ametropia should be conservative. Use caution if changing the prescription of an at-risk patient by more than 0.75 D. Also, make astigmatic changes carefully, particularly if oblique. Partial changes made in sphere, cylinder and axis as appropriate are acceptable, according to Elliott.

Patients with visual impairment should also be advised to seek home modifications to prevent falls via social service provision or fall nurse teams, he said. – by Daniel R. Morgan