Look beyond a patient’s chronological age

Functional, psychological and social factors cause individuals to age at different rates.

Aging is a universal phenomenon involving significant sensory, motor and cognitive changes in response to our advancing years. However, we do not all age at the same rate. Some individuals experience relative rapid declines in physiological and psychological functioning as they grow older, while others undergo significantly less pronounced changes over time.

Gerontological studies are focusing on increasing our understanding of the factors responsible for individual differences in the rate and extent at which we age. While the hereditary factors that play an important role in human aging are largely beyond our control, gerontologists often joke that the single best way to ensure longevity and healthful old age is to choose one’s parents wisely. However, in addition to the genetic factors influencing human aging, there is now strong evidence that many aspects of the aging process are related to environmental factors such as nutrition, stress, smoking and physical activity (Bakovy and Blair).

The growing proportion of older adults in today’s society is clearly evident to the practicing optometrist. Whereas people older than 65 years constituted a mere 4% of the population in 1900, they now represent more than 12.5% of the population.

Today, there are approximately 39 million people older than 65, and by 2020 the number of those 65 and older will rise to 51 million – nearly 20% of the population (U.S. Census Bureau, 1990). Even more remarkable is the increase in the number of the oldest members of our society, termed the “old-old.” By the year 2030, it is anticipated that more than 8 million Americans will be 85 or older. Indeed, this group is growing more than four times faster than any other segment of the population (Fowles).

Aging is typically defined as the chronological age, which is the number of years, months or days that have elapsed from birth. Many gerontologists believe definitions of aging that focus exclusively on calendar time are incomplete because they are independent of physiological, psychological and sociocultural factors. They also believe that to increase our understanding of senescence, other measures of aging designed to differentiate among individuals of the same chronological age are needed. These measures are often described as indices of functional age, which include physiological, psychological and social age. 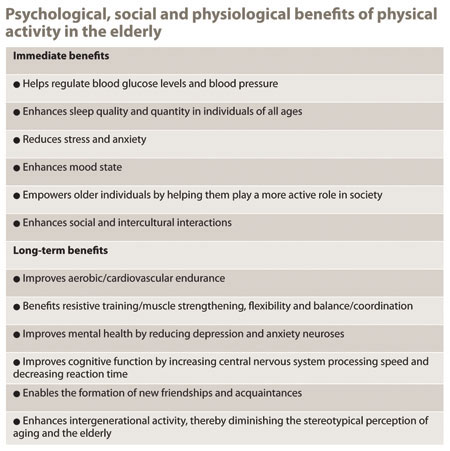 With physiological aging, most systems exhibit structural and functional declines. These disruptions in the integrity of the cell are, in turn, precursors of more gross morphological changes, such as decreased elasticity and compliance, demyelinization and neoplastic growth. As expected, these structural changes are almost always associated with profound behavioral consequences.

Psychological age refers to an individual’s capability along a number of dimensions of mental or cognitive functioning, including self-esteem and self-efficacy, as well as learning, memory and perception (Birren, Schroots and Birren). The concept of psychological age and its relationship to quality of life is now an important area of exercise science research.

Recognizing the importance of regular physical activity in the psychological, social and physiological health of older people, the World Health Organization published the Guidelines for Promoting Physical Activity Among Older Persons in 1997 (see table).

Social age refers to the concept that society often has fairly rigid expectations of what is and is not appropriate behavior for a person of a particular age (McGrath and Kelly). The impact of social roles and expectations on the lifestyle choices of older people is of considerable interest in experimental gerontology.

A functional image of advancing age is of increasing dependency and isolation, with diminishing financial resources for maintaining a dignified independent life, set against a background of physical and mental deterioration. The fact is that old age is not a time of loneliness and sadness for the vast of majority of people. For most, it is not even a time of chronic severe illness, despite the undoubted tendency to accumulate many pathological conditions with the passing years.

The health care system in America, as in many others in the Western world, has not responded well to the particular needs of the older population. Older people made up only 4.1% of the population at the beginning of the 20th century. One-third and one-half of the professional time of many primary care physicians, which includes optometrists, is now occupied with the care of patients age 65 and older. Yet, until recently, the response in terms of medical education, provision of comprehensive health care and preventive care resources has been limited.

The health care system reflects society’s, as well as physicians’, attitudes. These attitudes are also reinforced by a payment system that tends to emphasize acute illness and its treatment rather than the preventive care, screening, early diagnosis and chronic care needed by both well and sick elderly patients. In general, we face the prospect of an increasingly large elderly population served by a health care system that has not been well designed for it, with many health care providers inadequately trained for its special needs.

Clearly, the optometrist must not only look beyond a patient’s chronological age, but also consider the individual’s functional, psychological and social age. While this recognition and understanding may be typical of most optometrists, creating an awareness and increased knowledge of these significant age-related factors represents a continuing opportunity and challenge for the optometric practitioner.