A 43-year-old white male was referred to the eye clinic from our aviation medicine clinic for a dilated eye exam. The patient was an active duty sailor applying for a waiver to continue his work in the field of naval aviation. The patient reported a longstanding history of macular drusen in both eyes, which was first noted approximately 10 years ago. No night vision complaints were noted. He reported taking 40 mg telmisartan once per day by mouth for hypertension. His last dilated eye exam was about 1 year ago.

The patient’s best corrected visual acuity was 20/25+2 in each eye with a manifest refraction of +0.25 –0.25 × 070 OD and PL-0.50 × 138 OS. Extraocular muscles exhibited a full range of motion in both eyes, and confrontation fields were full to finger counting in both eyes. The patient denied metamorphopsia in either eye with Amsler grid testing. Color vision was normal in both eyes with Ishihara plates. Pupils were equal, round and reactive to light. IOP was 11 mm Hg OD and 12 mm Hg OS. Slit lamp examination of the anterior segment was unremarkable in both eyes. 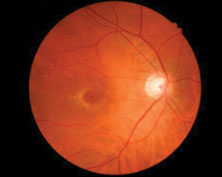 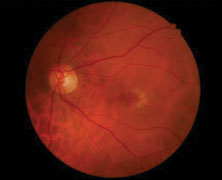 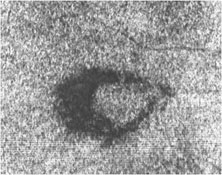 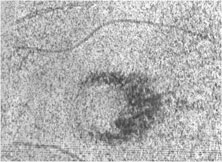 Three-dimensional spectral domain OCT scan showing a circular pattern of atrophy at the retinal pigment epithelium level in the macula of the right eye (on top) and left eye (on bottom). 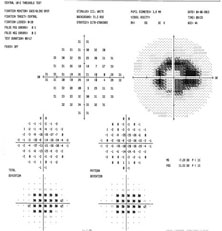 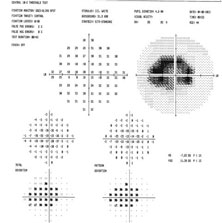 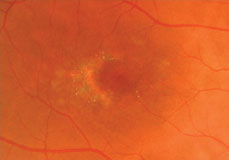 Macula photo of right eye showing white crystalline-like deposits in the perifoveal space with a “window” defect noted temporally. The macula in the left eye has a similar appearance.

Dilated fundus exam revealed yellow and white crystalline deposits in the perifoveal macula region of both eyes. Atrophy of the retinal pigment epithelium was evident in the temporal aspect of the macula with a crescent moon-shaped area of choroidal vasculature visible. A loss of choriocapillaris in the temporal aspect was demonstrated by the presence of obvious large choroidal vessels. The appearance was similar in both eyes.

I ordered macula photos, a high-definition OCT scan of both maculae and a 10-2 visual field of each eye. Three-dimensional OCT analysis of the macula revealed a perifoveal circular pattern of retinal pigment epithelium atrophy most prominent at the temporal aspect in both eyes.

Bietti’s crystalline corneo-retinal dystrophy is a rare autosomal recessive retinal degenerative disease characterized by retinal degeneration with many yellow-white crystals located primarily at the posterior pole. Additional findings include the presence of crystals at the corneal limbus. Patients typically show decreased vision, nyctalopia and scotomata. Bietti’s dystrophy is much more common in the Asian population. It is associated with numerous mutations in the CYP4V2 gene. Research findings by Li and colleagues have shown that the mutations in the CYP4V2 gene can be identified in 92% of those individuals who have been clinically diagnosed with Bietti’s crystalline corneo-retinal dystrophy. 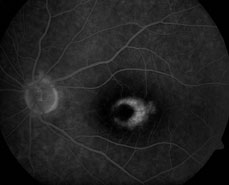 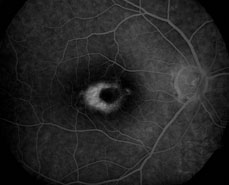 Cone dystrophy (CD) and cone-rod dystrophy (CRD) are the most common hereditary cone disorders in the world, with a frequency of 1:30,000, reported Thiadens and colleagues. Both diseases are characterized by loss of cone photoreceptors and progressive visual decline. The visual field in CD and CRD generally shows a central scotoma. Although CD has a slightly more favorable clinical course than CRD, both disorders progress to legal blindness in the majority of patients. Cone amplitude responses, as registered by full-field electroretinogram (ERG), deteriorate progressively.

In this case, the patient underwent a full field flash electroretinogram in 2010, which was normal, effectively ruling out CD or CRD.

Stargardt’s disease (also termed fundus flavimaculatus) is the most common form of recessively inherited macular dystrophy. It is caused by mutations in the ABCA4 gene, which is located in the short arm of chromosome 1. It affects individuals of any sex, age or race. Typically, fundus flecks and atrophy at the macula and midperipheral retina are observed.

Age-related macular degeneration is one of the few disorders for which the investigation of genetics has yielded rich insights into its diversity and causality. It also holds the promise of enabling clinicians to provide better risk assessments and develop and selectively deploy new therapeutics to either prevent or slow the disease and reduce the threat of vision loss. Risk of developing AMD has been linked to several genetic variants including the Y402H variant of complement factor H and the LOC387715 A69S variant, according to Zhang and colleagues.

Although the findings in this patient resembled AMD, he was considered extremely young to be developing this age-related disease.

Genetic testing for mutations in the CYP4V2, Y402H and LOC387715 gene was obtained for this patient through the National Eye Institute DNA Diagnostic Laboratory. No mutation was found in the coding region of the CYP4V2 gene in this individual, which effectively ruled out the possibility of Bietti’s corneoretinal dystrophy. However, DNA testing did reveal the patient to be homozygous for the complement factor H (Y402H) variant. Testing for the LOC387715 (A69S) variant was negative. The risk for development of AMD was estimated at 7:1 over the normal population. The patient was counseled on the findings.

This case represents an example of early onset bilateral advanced dry macular degeneration most likely brought about by a dysfunctional complement system as evidenced by lack of a functional complement factor H gene from either parent. While no effective treatment currently exists for this patient’s condition, the research being performed in the area of stem cell therapy holds great promise.

The patient was counseled on the importance of maintaining a healthy lifestyle and protecting his eyes from the sun at all times. He was referred to a retina specialist for future monitoring and care.