A 57-year-old African-American female presented to UAB Eye Care for a second opinion. She had been told elsewhere that she had glaucoma and that it was encroaching on her visual field in both eyes. She further stated that she had experienced blurred vision in each eye and reduced side vision, but observed no floaters or flashes. She also reported noticing a black spot in her right eye while watching television. These symptoms have been present for about the past 2 weeks.

Review of systems indicates an appropriately oriented individual whose only other complaint is occasional stomach pain that is not treated. She is medicated currently with 200 mg of hydrochlorothiazide, 20 mg of Monopril (fosinopril sodium, Bristol-Myers Squibb) and 50 mg of Norvasc (amlodipine besylate, Pfizer) daily. Blood pressure measured on the right arm while sitting was 184/82 mm Hg.

Visual acuity was 20/200 and 20/60 in the right and left eyes, respectively, not improving with pinhole or refraction. There was no relative afferent pupillary defect. The IOP measured by Goldmann tonometry was 15 mm Hg OD and 17 mm Hg OS. Binocular testing revealed no tropia or extraocular muscle restrictions. Retinoscopy was plano at distance in each eye, and subjective refraction did not alter this result. The anterior segment of each eye was unremarkable with a deep and quiet anterior chamber and open anterior chamber angles by van Herick estimation. 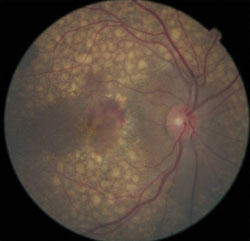 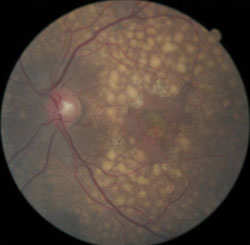 The pupils were dilated with 1.0% tropicamide. There was evidence of anterior cortical opacification symmetrically in each eye. Fundus photography was performed to document the status of the posterior pole in each eye.

Given the patient’s age and clinical presentation, the differentials are limited. They may include Best’s disease (early stage or, in this case, adult-onset), any of the pattern dystrophies, Malattia leventinese (familial dominant drusen or Doyne honeycomb retinal dystrophy), Sorsby macular dystrophy and Stargardt’s disease (fundus flavimaculatus).

The similar presentation in each eye would be consistent with a number of dystrophies. However, based on the pattern of drusen that involves the posterior pole as well as the macula, the diagnosis is familial dominant drusen. 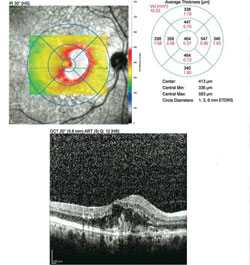 Spectralis OCT (Heidelberg Engineering, Vista, Calif.) of the right eye of this patient performed on the same day. Note the dramatic thickening of the retina as well as the choroidal neovascular invasion into the subretinal space. Because of the tissue damage from choroidal neovascularization, the drusen are not well imaged. 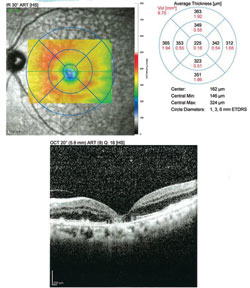 Spectralis OCT of the left eye of the same patient performed on the same day. Note the retinal thickening, disrupted outer retina as well as the subretinal fluid. The drusen are imaged exquisitely in this cross-sectional image. Central macular thickness is nearly normal at 162 µ. In addition, there is evidence of vitreous traction to the nasal side of the center of the macula.

The name for this clinical presentation, Malattia leventinese, arises from a cluster of patients from the same family in the Leventine valley of Switzerland. A similar honeycomb presentation was described earlier by Doyne, and that clinical picture became eponymous. According to Graff, it is generally accepted that each of these names now describes the clinical description of familial dominant drusen.

This patient did not report a family history of ocular problems. It should be kept in mind that her mother suffers from Alzheimer’s disease and that the patient apparently misinterpreted a diagnosis of glaucoma. There is mounting evidence for pinpointing a single gene that is responsible for familial dominant drusen, but one has yet to be confirmed as solely responsible for the clinical presentation.

While it is unusual for these patients to develop choroidal neovascularization (Pager and Zech), this is present dramatically in the right eye, coinciding with the all of the clinical findings.

An interesting case of familial dominant drusen followed for over a decade in which choroidal neovascularization developed can be found here: http://www.EyeRounds.org/cases/48-Mallattia-Leventinese-Familial-Dominant-Drusen.

This patient was treated with an intraocular injection of an anti-VEGF agent and improved to 20/25 visual acuity in the right eye within a week.