A Puerto Rican optometrists’ group and two of its former leaders have agreed to settle Federal Trade Commission charges that they orchestrated price-fixing.

The FTC charges, which were approved 5-0 on Sept. 11, were leveled against Colegio de Optometras de Puerto Rico, former Colegio treasurer Edgar Dávila Garcia, OD, and former association president Carlos Rivera Alonso, OD. The Colegio is headquartered in San Juan and has about 500 members.

According to the FTC press release, “They violated the FTC Act by orchestrating and carrying out agreements among the group’s members to refuse, and threaten to refuse, to deal with payers, unless the payers raised the fees paid to the optometrists.”

The FTC alleged that a missive was sent on Colegio letterhead to the association’s members urging them to not to participate in a vision plan by Ivision International Inc., and, subsequently, 30% of the members dropped the plan.

“In June and July 2004, Ivision sent announcements to optometrists about its contracts with several new health plans (many of which previously had contracted only directly with optometrists),” the FTC statement reads. “Under these new contracts, Ivision offered to pay optometrists the same fees as in its contracts with other health plans. ... As a result of these new contracts, the optometrists would lose much or all of their lucrative direct business with these plans. As part of a collective effort to get Ivision to raise its rates, Colegio representatives contacted other optometrists and urged them to stop participating in Ivision’s network.”

“Drs. Dávila and Rivera also orchestrated collective negotiations with other plans, according to the FTC, and on several occasions, Colegio officers approached other health plans to negotiate higher reimbursement levels for Colegio members,” the release said.

The FTC’s consent order puts a halt to the illegal conduct and bars the Colegio from facilitating similar future agreements. Any more violations could result in penalties of up to $11,000 per violation. As part of the agreement, the Colegio admits no wrongdoing in the case.

FTC attorney Susan Raitt said the matter was investigated because the charges leveled violated antitrust laws on the books.

“We allege in our complaint that they violated an FTC statute that says that competition should not be restrained,” Ms. Raitt told PCON in an interview. “Because we thought it was serious and that competition and consumers could be harmed from the optometrists’ actions, we investigated it. We are hoping that this sends a message to professionals in Puerto Rico, that if they are acting as competitors, they can’t get together and do these types of things.”

Ms. Raitt said the Colegio members had other options to deal with the sudden reimbursement changes. 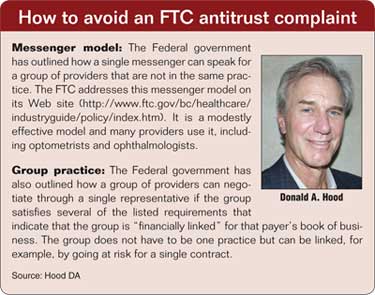 “They have choices,” she said. “They can individually go to the plan and individually negotiate. They can form groups where they are no longer competitors, where their profits rise and fall together (where they share financial risk) or where they are clinically integrated, and then go to the third party payers. Then they’d no longer be in competing positions and may be viewed as one single economic entity.”

Some optometrists said they find this approach unrealistic, however.

“Going to the insurance company individually usually does no good,” Donald A. Hood, OD, a Primary Care Optometry News Editorial Board member who practices in Aurora, Colo., told PCON. “If the payer is having a hard time getting an adequate provider panel for important clients, then the payer will pay more attention to an individual provider, but usually this is not the case with ODs.”

Many optometrists feel conflicted in situations such as the one the Puerto Rico association faced.

“Dealing with the issue of insurance, managed care and vision plans is a critical issue for the future of optometry,” Scott A. Edmonds, OD, also a member of the PCON Editorial Board, said. “It requires a large paradigm shift for most traditional practitioners and must not be taken lightly. Knee-jerk responses like we see in this case will lead to very serious complications, yet to do nothing will be the end of optometry as we know it.”

The antitrust investigation was conducted jointly with the Office of Monopolistic Affairs of the Commonwealth of Puerto Rico’s Department of Justice.