By customizing the power of the lens implanted during cataract surgery, we can provide a specific refractive result to our patients. This means that even patients who are highly myopic or hyperopic can achieve a near plano result after IOL implantation. But our calculations for the ideal IOL power are not perfectly accurate; rather, they are estimations based on preoperative biometry.

Effect of A-constant on IOL power

The term “A-constant” seems misleading because unlike mathematical constants such as pi or e, it varies among IOL models and even among surgeons. When manufacturers make an IOL, they determine a good initial value for the A-constant considering the wide pool of surgeons who will be using the lens. This value is then honed by each surgeon to reflect his surgical technique and the variance of his preoperative biometry. If a surgeon has a keratometer that consistently measures the cornea as slightly steeper than it truly is, he can adjust his A-constant higher to compensate for that. If the axial length determination gives a value that is shorter than the true value, the A-constant can be lowered proportionally.

In cases in which we implant an IOL in an alternate location from what is intended, the A-constant needs to be adjusted. For example, a three-piece IOL has an A-constant of 118.4 for placement in the capsular bag. However, if we implant this same IOL in the ciliary sulcus, which is a more anterior location, then we must adjust the A-constant down to lower the IOL power. The more anterior that we place a lens, the lower the A-constant and resultant IOL power will be, and the more posterior, the higher. This is why surgeons often use the rule of thumb to subtract 1 D from the lens power when placing a lens in the ciliary sulcus of an average eye. 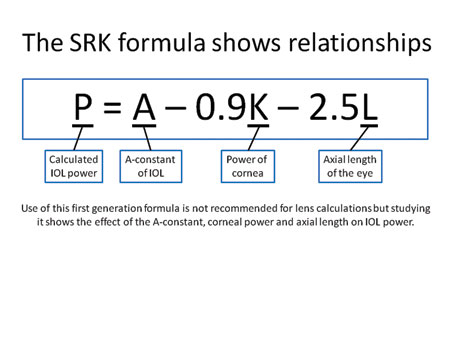 Figure 1. The first-generation SRK formula is not recommended for lens calculations but studying it shows the relationships between factors that affect calculated IOL power. Note that the A-constant affects the IOL power in a 1:1 ratio. 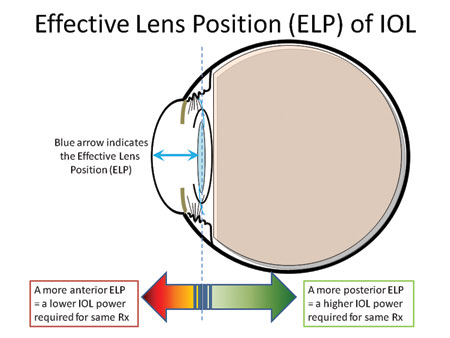 Figure 2. The effective lens position of the IOL determines the final postoperative refraction. If the IOL is more anteriorly placed, then a lower IOL power will be required, while a more posterior position will require a higher IOL power for the same postop refraction. 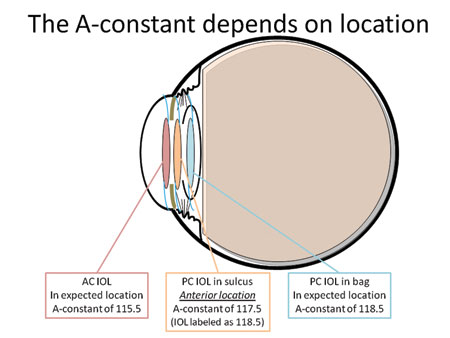 The simple lens equations do not work well for lens calculations due to the difficulty in predicting the effective lens position. While the original SRK formula was useful in “typical” eyes, the theoretical formulae such as the SRK-T, Hoffer Q and Holladay 1 tend to be more accurate due to their determination of effective lens position. Newer formulae such as the Holladay 2 and Haigis can be even better but require more input variables than just the keratometric power and axial length. Some formulae will use different lens constants such as surgeon factor or anterior chamber depth, but we can easily convert the A-constant to those values the same way that we can convert yards to feet to inches.