Lens power calculations have evolved over the past few decades, providing patients who undergo cataract surgery an opportunity to correct all or most of their refractive error and lessen their dependence on glasses. While lens power determination is reasonably accurate, it is more estimation than a perfectly accurate calculation, and that is due to the difficulty in predicting where exactly in the eye the IOL will end up — known as the effective lens position. We can, however, use the refractive result of the first eye to hone the IOL calculations of the second eye.

Original lens power estimation was done based on the patient’s glasses prescription instead of biometry. We then moved toward simple regression formulae based upon keratometry and axial lengths. We now have theoretical formulae, such as the Holladay 2 and Haigis, which input more biometric data, such as anterior chamber depth and other measurements, to produce even more accurate results. There are also even more advanced systems in development, such as intraoperative aberrometry and calculations based on anterior segment imaging. With all of these methods, keep in mind that usually both eyes tend to have similar anatomy, tend to heal the same way, and will have similar effective lens positions after routine cataract surgery.

The A-constant for the IOL is given in units of diopters, and it represents many factors: the effective lens position, the geometry of the IOL and even the variance in measurement of the biometry equipment. A precise value for the A-constant can be back-calculated for each eye based on the power of IOL implanted and the end refractive result. This new, honed A-constant is then used to do the IOL power calculations for the second eye to achieve a more accurate postoperative refraction for the second eye.

This patient had a history of mild hyperopia and the recent development of cataracts. The biometry for the two eyes was very similar with regard to keratometry and axial lengths. The left eye had successful cataract surgery first with implantation of a monofocal lens in the capsular bag. The IOL power was +22 D, and an A-constant of 119.0 was used for the calculations with the Holladay formula. After healing, the eye achieved a postop refraction of –1.00 +0.50 × 090, which is a spherical equivalent of –0.75 D. The patient now wants cataract surgery of the fellow eye but would really like to achieve a refraction of plano. 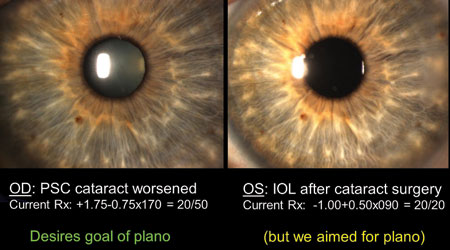 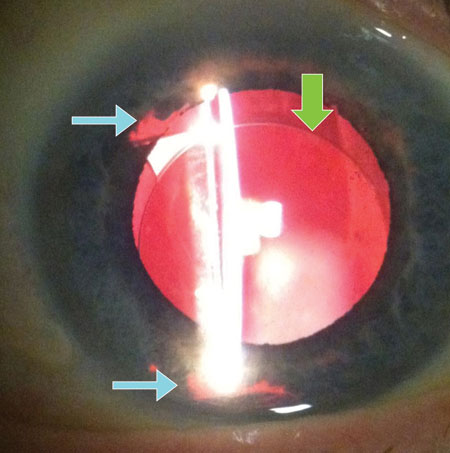 Figure 2. This patient had a single-piece acrylic IOL placed in the sulcus and ended up with a refractive surprise of –0.75 D instead of the intended plano. In this case, the refractive surprise was due to inappropriate placement of the IOL into the sulcus, which also resulted in complications such as sunset displacement (green arrow) and iris transillumination defects (blue arrows). An IOL exchange was required to remedy the situation.

In this case, we can back-calculate the appropriate A-constant that would have given us these results. With the patient’s preoperative biometry values, what A-constant would give a postop refraction of –0.75 D? In this case, using 118.2 for the A-constant will give us the exact results we achieved for the left eye’s cataract surgery. In applying this same value of 118.2 to the calculations for the right eye, we see that a +21 D of the same IOL type should give a postop refraction of plano. The second eye was done with this lens and, indeed, a plano result was achieved.

There was a complication during cataract surgery in which the posterior capsule ruptured, so the lens implant was placed in the ciliary sulcus. Even though the calculations estimated that the postop refraction would be plano, because the IOL position was now shifted anteriorly, this same lens power resulted in a myopic surprise of –0.75 D. To add to the difficulties, this patient had a single-piece acrylic IOL placed in the sulcus, which, due to the thick haptics, caused iris chaffing and transillumination defects, as well as an eventual sunset dislocation of the optic.

In eyes with average axial length, moving the IOL position from the capsular bag forward to the ciliary sulcus will result in a myopic shift in refraction. It is for this reason that IOL power is reduced by about 1 D in this situation to achieve the postop refraction originally desired. In this patient’s case, the single-piece acrylic lens was explanted and replaced with an iris-sutured three-piece IOL. For power calculation, these iris-fixated IOLs tend to have the same effective lens position, and therefore the same IOL power, as in-the-capsular-bag placement. If we chose to replace the lens with an anterior chamber IOL, we would change the IOL power based on the A-constant of the new anterior chamber IOL. For this patient’s second eye, the IOL power calculations should be routine, as long as the IOL is placed in the capsular bag.

Our patients’ visual results after surgery are a function of the surgery performed as well as the individual patient’s healing and anatomy. Recent studies, such as the one performed by Thomas Olsen, MD, PhD, show us that we can successfully use the refractive result of the first eye after cataract surgery to help hone the IOL calculations of the fellow eye. As cataract surgery and refractive surgery merge into one subspecialty, our patients will have higher expectations for precise results, and we will have the ability to deliver them.