How and When Should I Work-Up Horner Syndrome?

A 55-year-old hypertensive man complains of acute headache on the left and is found to have a left Horner syndrome. What evaluation is necessary with Horner syndrome and how urgently should it be performed? Are there any life-threatening etiologies of a Horner syndrome?

This patient with an acute isolated painful Horner syndrome is considered to have a left internal carotid artery dissection until proven otherwise. He needs to be evaluated emergently in neurology with noninvasive vascular imaging. If a dissection is confirmed, he will need to be admitted and treated to prevent a cerebral infarction.

Figure 23-1. Right Horner syndrome. There is slight decrease of the palpebral fissure on the right and the right pupil is smaller than the left pupil.

Cocaine drops are most commonly used (but are now difficult to obtain). Apraclonidine drops (used for glaucoma; off-label application) are now replacing cocaine for the diagnosis of Horner syndrome because they are easy to obtain (Figure 23-2).

Figure 23-2. Diagnosis of Horner syndrome with apraclonidine drops (same patient as in Figure 23-1). The anisocoria is reversed with the right pupil being now slightly larger than the left pupil. The palpebral fissures are now symmetric.

To perform a cocaine test, instill 2 drops of 4% or 10% cocaine in both eyes. Forty-five minutes to 1 hour later, a normal pupil dilates while the Horner pupil dilates poorly and the anisocoria increases. Cocaine blocks the reuptake of norepinephrine at the sympathetic nerve synapse with the iris dilator. It causes pupillary dilation in eyes with intact sympathetic innervation but has no effect in eyes with impaired sympathetic innervation, regardless of the lesion location (little or no norepinephrine is being released into the synaptic cleft tonically).

Testing with apraclonidine involves instillation of 2 drops of 0.5% or 1% apraclonidine in both eyes. After 30 to 45 minutes, a normal pupil does not dilate while a Horner pupil dilates and the anisocoria reverses. The palpebral fissure enlarges (apraclonidine reverses the Horner syndrome). Apraclonidine is a direct a-receptor agonist (strong a2 and weak a1). It has no effect in eyes with intact sympathetic innervation but causes mild pupillary dilation in eyes with sympathetic denervation regardless of the lesion location (with denervation hypersensitivity, a1 effect dilates the Horner pupil).

Horner syndrome may be caused by a lesion anywhere along the sympathetic pathway that supplies the head, eye, and neck. Associated symptoms and signs usually allow localization of the lesion.

Except for rare emergencies, pharmacologic localization of the lesion should ideally be performed before obtaining any neuroimaging in adults. The evaluation of an adult with Horner syndrome is mostly based on lesion location. The most classic cause of central (first-order neuron) Horner is a lateral medullary infarction (Wallenberg syndrome); other causes include various thalamic, brainstem, and spinal cord lesions. Second-order Horner syndromes are most suggestive of neoplasm or trauma of the lower cervical spine, brachial plexus, or lung apex. Third-order Horner syndromes point to lesions of the internal carotid artery such as dissection or cavernous sinus aneurysms. Further evaluation depends upon the duration of symptoms, the presence of pain, other symptoms or signs, and the localization of the lesion to the first- or second-order neuron or to the third-order neuron. The most common causes of Horner syndrome in adults based on lesion location are included in Table 23-1. 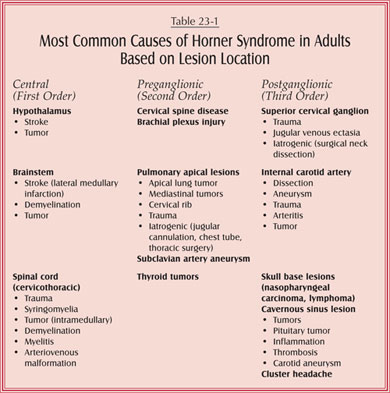 All patients need a physical examination (ocular, neurologic, neck, supraclavicular, chest). The tests ordered will vary depending on the lesion location, the presence of associated symptoms or signs, the urgency of the work-up, and the radiologist’s preference. If a first- or second order Horner is present, I suggest computed tomography (CT) or magnetic resonance imaging (MRI) of the chest (to view pulmonary apex), MRI head and neck with contrast, and possibly a magnetic resonance angiography (MRA) of the aortic arch or CTA (CT angiogram) of the head and neck. If a third-order Horner is present, I suggest MRI of the head with contrast and MRA or CTA of the head and neck. If localization of the Horner syndrome is unknown, I suggest imaging the brain, neck, spinal cord, carotid arteries, and pulmonary apex (may require multiple imaging tests). I feel that in this situation that the easiest test is a CT/CTA of the head, neck, and chest, which allows good examination of the brain and spine; the soft tissues; and large blood vessels in the head, neck and chest; it also allows examination of the pulmonary apex. Some authorities suggest MRI and MRA of the head, neck, and pulmonary apex using predefined Horner protocols.

Pearls to remember include a combination of an ipsilateral Horner syndrome (first order) and contralateral superior oblique palsy (fourth nerve palsy) suggests a lesion of the trochlear nucleus or its fascicle in the brainstem; a combination of an ipsilateral Horner syndrome (third order) and an abducens paresis (sixth nerve palsy) suggests a lesion in the cavernous sinus; an acute painful Horner syndrome should be presumed related to a dissection of the ipsilateral internal carotid artery unless proven otherwise (these patients are at risk of cerebral infarction and should be evaluated emergently). In many patients, especially patients with a third-order Horner syndrome, no etiology may be discovered.

Most patients with Horner syndrome have no visual changes and tolerate a mild ptosis. Rarely, lid surgery is requested to correct a persistent ptosis. Topical apraclonidine corrects the ptosis associated with Horner syndrome and may be used intermittently for cosmetic reasons or when the ptosis reduces the superior visual field.

* Although a diagnosis of Horner syndrome may simply be based on the findings of anisocoria, with the small pupil not dilating well in the dark and decreased ipsilateral palpebral fissure, often pharmacologic testing with cocaine or apraclonidine drops is necessary to confirm the diagnosis in subtle cases.

* If a first- or second-order Horner is present, a CT or MRI of the chest (to view pulmonary apex), MRI head and neck with contrast, and possibly an MRA of the aortic arch or CTA of the head and neck are suggested.

* If a third-order Horner is present, MRI of the head with contrast and MRA or CTA of the head and neck is suggested.

* If localization of the Horner syndrome is unknown, images of the brain, neck, spinal cord, carotid arteries, and pulmonary apex should be performed.