How Do I Diagnose and Treat Herpetic Uveitis?

Infections with viruses of the family Herpesviridae are common worldwide. More than 100 herpes viruses have been characterized, but only 8 infect humans: Herpes simplex virus (HSV) 1 and 2, varicella zoster virus (VZV), cytomegalovirus (CMV), Epstein–Barr virus (EBV), human herpes virus 6-7-8. Those viruses can cause a wide spectrum of ocular disease, which comprises a number of clinical presentations: blepharitis, keratoconjunctivitis, dendritic epithelial keratitis, geographic or trophic herpetic corneal ulceration, stromal keratitis, and intraocular inflammation. Intraocular herpetic inflammation can be divided into 2 major entities, anterior uveitis with or without active epithelial keratitis or interstitial keratitis and viral retinopathy, which were described in both immunocompetent and immunocompromised patients.

Because not all clinicians have access to intraocular fluid analysis, awareness of the clinical symptoms of herpetic anterior uveitis is important for diagnosis and subsequent treatment. The diagnosis is relatively simple in the presence of concomitant skin lesions, active keratitis, and/or corneal anesthesia. However, in the absence of unclear evidence of current or past HSV infection, the diagnosis requires clinical suspicion and astute observations borne of such suspicion. Anterior uveitis secondary to HSV or VZV occurs in association with active or inactive corneal involvement, but anterior uveitis without associated corneal changes also occurs as an isolated entity.

Ocular involvement is virtually always unilateral, with patients suffering from blurry vision, photophobia, pain, and redness. On slit-lamp examination, we may find an active keratitis, corneal scaring, or normal cornea. The degree of intraocular inflammation can vary from mild to severe.

The iritis may be nongranulomatous but is more often granulomatous with moderate size mutton fat keratic precipitates (Figure 16-1), often in a triangular shape, located on the inferior part of the cornea, and, in the case of active keratitis, collects frequently under the area of the corneal lesion. Posterior synechiae, loss of the function of the sphincter muscles, and atrophy of the iris are responsible for a distorted pupil. The iris atrophy, which results from ischemic necrosis of the stroma, is characterized by a defect at the level of the iris pigment epithelium, has well-defined edges, and can be only seen with transillumination. It is in the specific search for such pathology via retroillumination that most ophthalmologists fail due to their lack of clinical suspicion for viral uveitis. Increased intraocular pressure is found in 90% of the patients, and trabeculitis is considered as the principal cause. Episcleritis and scleritis occur with anterior uveitis in less than 1% of patients. 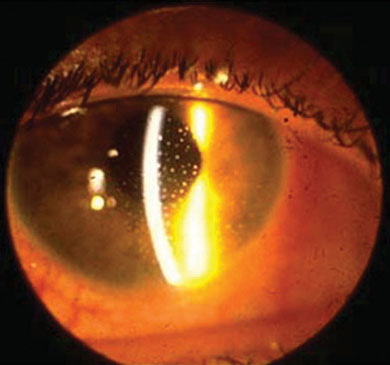 The diagnosis of herpetic anterior uveitis is usually based on the previously mentioned clinical features, but the gold standard is the isolation of the virus or viral antigens in intraocular liquid as aqueous humor, which is obtained after an anterior chamber tap or vitreous fluid in case of posterior involvement. Serological testing for anti-HSV is a useful epidemiological tool but is not diagnostically helpful in an individual patient.

Confirmation of intraocular viral infection with or without viral replication relies on molecular techniques such as polymerase chain reaction (PCR). The sensitivity of PCR to detect viral DNA can reach 80% to 96%, and it requires a small quantity of intraocular fluid. A less widely used method for the diagnosis of herpetic uveitis is the Goldmann-Witmer (GW) coefficient. This coefficient compares the ratio of anti-herpes antibody in serum and aqueous humor with the ratio of total immunoglobulin G in serum and aqueous humor, and is considered positive if the ratio is greater than 3. The GW coefficient is more useful in immunocompetent patients because of the high false-negative rate in immunocompromised hosts.

The pathogenesis of herpetic iridocyclitis is believed to involve active viral replication and the host immune responses.

Corticosteroids should be slowly tapered once the inflammation is controlled to avoid “the rebound effect.” Topical antiviral agents promote resolution of herpetic epithelial keratitis, but their effect in deeper forms of ocular involvement has not been established. They should be used in concomitance with corticosteroid drops to prevent recurrent epithelial keratitis. The topical anti-herpetic agent of choice has become gancyclovir gel.

Concerning the use of oral acyclovir, the HEDS (herpetic eye disease control group) results suggest a benefit of oral acyclovir in the treatment of herpetic iridocyclitis in patients receiving topical corticosteroids and topical antiviral prophylaxis. Oral acyclovir at a dosage of 400 mg 5 times per day for several weeks is usually used. Intravenous acyclovir (10 mg/kg/d) may be considered in severe anterior uveitis and must be employed in all immunocompromised patients. Alternatively, one may use valacyclovir 1 g 3 times per day or famciclovir 500 mg 3 times daily. Oral acyclovir, 600 to 800 mg/day, given on a long-term basis, can diminish the recurrence of herpetic anterior uveitis.

I am not going to detail the viral retinopathies that are covered elsewhere in this work, but one must, for every anterior viral uveitis case, perform a dilated eye fundus to exclude any posterior involvement as an acute retinal necrosis or a progressive outer retinal necrosis syndrome.

Van der Lelij A, Ooijman FM, Kijlstra A, Rothova A. Anterior uveitis with sectoral iris atrophy in the absence of keratitis: a distinct clinical entity among herpetic eye diseases. Ophthalmology. 2000;107:1164-1170.