Cataract surgery is so commonly performed that it seems to be routine. However, experienced cataract surgeons know that despite having done thousands of cases over the years, every case is unique, and challenges can present suddenly. All surgeons will experience intraoperative complications periodically during their careers. The key is to effectively and safely deal with these complications to produce good results for our patients.

The patient in our example was referred for cataract surgery. At the initial examination, everything seemed normal: good biometry, good dilation and a cataract of moderate density. A single-piece monofocal lens implant with a goal of plano was selected, and the patient was schedule for surgery.

Under topical and intracameral anesthesia, diamond blades were used to create a 0.8-mm paracentesis incision and a 2.8-mm temporal phaco incision. Care was taken to create a 5-mm round capsulorrhexis that was centered on the patient’s visual axis. The nucleus was removed using phacoemulsification, and then the cortex was removed using coaxial irrigation and aspiration. A small amount of subincisional cortex remained, which was to be removed after IOL insertion. By inserting the IOL first, the posterior capsule would be protected while the last remaining cortex fragment was aspirated.

The IOL power was confirmed, and then the IOL was loaded into the injector. It was placed directly into the capsular bag, at which time it began unfolding. The chopper was used to center the lens and the haptics unfolded into position; however, something was not right. The IOL began to descend too far posteriorly toward the retina, which should not have happened because the posterior capsule should have been securely holding the lens in place. The question became what to do next; any delay in response would have resulted in the IOL becoming engulfed in vitreous and dropping onto the retina.

The chopper was used to bring the IOL up toward the anterior chamber, and viscoelastic was injected under the optic to help support it. The viscoelastic was also helpful to compartmentalize the eye and prevent vitreous prolapse. The temptation at this point would have been to simply dial this IOL into the ciliary sulcus, but this must be avoided. It is clear that a single-piece acrylic IOL should not be placed in the sulcus because the thick, non-angulated haptics will eventually induce iris chaffing, uveitis, and possibly glaucoma and hyphema.

The lens had to be removed and replaced with a three-piece IOL that would be better suited for sulcus placement. Using micro-scissors and forceps, the IOL was grasped and cut to facilitate explantation. I prefer to bisect 80% to 90% of the optic, pull the IOL toward the incision and rotate it out of the eye. This allows an IOL with a 6-mm optic to be removed through an incision that is half that size.

In this case, however, there was another surprise: When the IOL was being removed, it inadvertently nicked an iris vessel and induced bleeding. More viscoelastic was injected to push the iris away from the IOL, epinephrine was given intracamerally to stop bleeding, the incision was enlarged, and the entire IOL was finally removed. 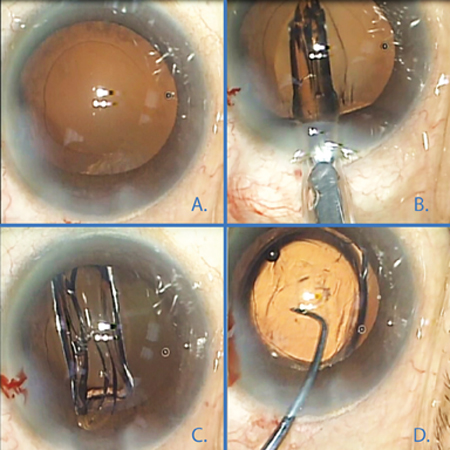 (A) The capsulorrhexis looks good, and the capsular bag is empty except for a small fragment of subincisional cortex that will be removed after the IOL is inserted. (B) The single-piece acrylic IOL is placed into the anterior chamber and then guided (C) into the capsular bag. (D) The chopper is used to center the optic as the haptics unfold.

A careful examination revealed that the entire posterior capsule was open. There was not a small rent or break, but rather a large opening that extended the entire width of the capsule. It seemed that the IOL itself may have had a sharp or irregular edge that cut the capsule as it was being inserted. With posterior capsules having a thickness of less than 10 µm thick, they are susceptible to damage.

Fortunately, there was just a small amount of prolapsed vitreous in the anterior segment. The 23-gauge bimanual vitrectomy system was used through two limbal paracentesis incisions to remove the prolapsed vitreous and the last bit of subincisional cortex. A new three-piece IOL was placed in the ciliary sulcus and oriented vertically at the 12 o’clock and 6 o’clock meridians to achieve better fit and centration.

Using the existing 5-mm capsulorrhexis, the 6 mm-optic was captured using a button-hole technique for maximum long-term stability. The viscoelastic was removed using the bimanual 23-gauge vitrectomy system, and the main incision was closed with a 10-0 nylon suture. The suture ensured watertight closure of the main incision, which was particularly important in this case. If the incision leaked and the anterior chamber collapsed, the IOL could have become dislodged and more vitreous could have prolapsed.

In cases in which the posterior capsule is ruptured, there is a higher risk of complications, such as endophthalmitis, cystoid macular edema and retinal detachment. The patient’s postop course was prolonged, but the healing progressed nicely. 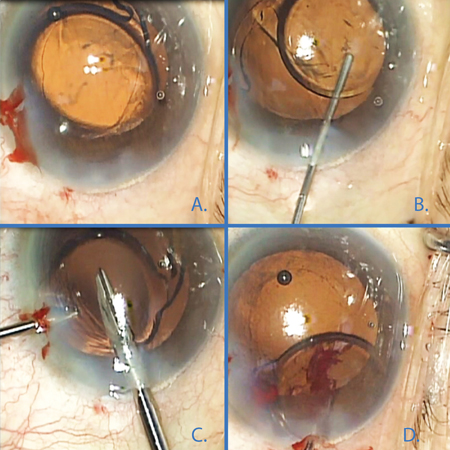 (A) The IOL is descending into the vitreous after insertion. (B) Viscoelastic is injected under the optic to bring the IOL up and create a barrier in front of the vitreous. (C) The IOL optic is bisected and upon removal, bleeding is induced (D). 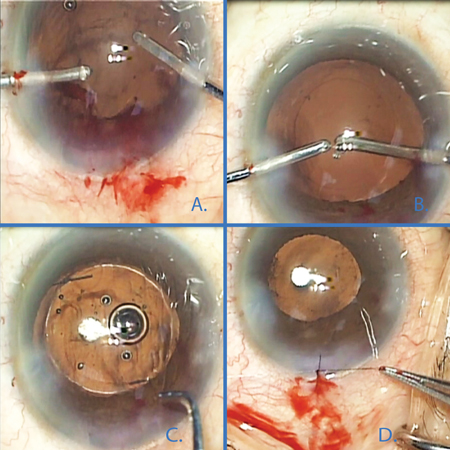 The 23-gauge bimanual vitrectomy system is used to remove blood (A) and prolapsed vitreous (B), resulting in a clean anterior chamber. (C) The new three-piece IOL is inserted into the ciliary sulcus with the optic captured through the capsulorrhexis. (D) A suture is placed to ensure watertight closure of the main incision.

The extended surgical procedure induced a higher degree of inflammation which required a longer course of post-operative steroids and NSAIDs. Care was coordinated with her retinal specialist who examined her retinal periphery in detail to ensure that the IOL exchange and anterior vitrectomy did not induce a retinal break or detachment. The patient recovered good vision and was happy.

The take-home lessons here are to be focused and vigilant even during seemingly routine surgeries because complications can present as surprises. For this case, everything looked great until the IOL started sinking into the vitreous.

Always do what is best for the patient in the long term. In this case, I am happy that the “short cut” of simply dialing the existing one-piece IOL into the sulcus was not used. This would have led to future problems and the need for another surgery.

Finally, relax and take your time to fully address the problems that are encountered. The question I ask myself is, “What would I want done if this were my eye?”