Pinhole pupilloplasty, or PPP, has been described as a surgical technique to enhance the visual and image quality in cases with higher-order aberrations. The concept behind performing PPP is that a pinhole effect is created that helps to channel the rays of light through the central pinhole pupil as it bars the entry of light rays emanating from the irregular peripheral cornea. However, centration of PPP is essential as the pinhole pupil that is crafted with the help of pupilloplasty should be central and in line with the visual axis. Another crucial aspect is the size of the pinhole pupil achieved at the end of the procedure. 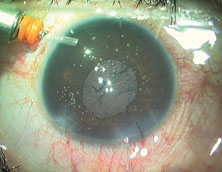 Figure 1a. Patient with astigmatism. Purkinje image 1 seen. Note the trocar anterior chamber maintainer is fixed, so fluid always flows inside the eye. 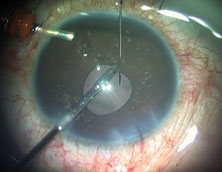 Figure 1b. SFT pupilloplasty started. Note one hand holds the iris while the needle passes through the iris. 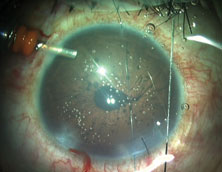 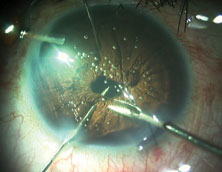 Figure 1d. SFT pupilloplasty performed on the other side of the pupil.
Source: Priya Narang, MS, and Amar Agarwal, MS, FRCS, FRCOphth

The single-pass four-throw (SFT) pupilloplasty procedure was adopted for performing a PPP. A multiple quadrant approach is necessary to achieve a PPP, and adopting an SFT method ensures minimal passes through the anterior chamber (Figures 1a to 1g).

PPP is centered around the triad of P1 image formed on the anterior surface of the cornea. Often, the iris tissue tends to cover up the P1 image due to improper calibration of the iris tissue involved in the 10-0 needle. In such a scenario, a vitrectomy probe can be used to cut off the superimposed iris tissue over the P1 image. Apart from centration, sizing the pinhole is equally important. The authors aimed to achieve a 1.5-mm pupil for all cases. A pinhole marker was employed for the same to help accurately gauge the pupil size intraoperatively. Alternatively, intraoperative OCT can also be employed for sizing the pupil. 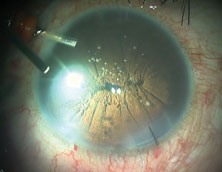 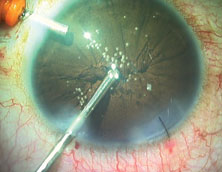 Figure 1f. Pinhole pupil is too small, so a vitrectomy probe helps enlarge it to 1.5 mm by chewing up a little bit of the iris.

As a sequel to the PPP procedure, it is observed that the pupillary axis and the visual axis almost fall in line with each other. Angle kappa is the angle formed between the pupillary axis and the visual axis, whereas chord mu is described as the two-dimensional displacement between the visual axis and pupillary axis. Pentacam (Oculus) studies have revealed a significant decrease in the chord mu level postoperatively in all the cases. This probably explains the improvement in visual quality apart from the pinhole effect induced in all of the cases. The importance of decreased chord mu cannot be undermined in cases involving multifocal lens implantation.