Access to all aspheric IOL types allows for patient-specific outcomes

Photographers have known for many years that the key to great images is the optical properties of the lenses used in the cameras. We adopted the same concept in ophthalmology with the introduction of precisely made IOLs with aspheric optics. Although the most important optical function of an IOL is correcting lower-order aberrations such as sphere and cylinder, the ability to modulate the spherical aberration of the eye can lead to further improvements in vision.

Lens power calculations depend on accurate biometry of the corneal power and axial length, but also on the ability to predict the effective lens position of the IOL after surgery. This last factor ends up being the source of much of the variance in refractive outcomes in our cataract surgery patients. Ideally, we would like to address the spherical component of the refraction, the astigmatism, as well as the spherical aberration with cataract surgery and the IOL implanted.

Studies done by Li Wang, MD, PhD, and Douglas D. Koch, MD, demonstrate that when we look at the average of the various corneal aberrations in a sample of normal eyes, the only one that has a non-zero mean is spherical aberration (SA). The average cornea has a small degree of positive SA, which the young crystalline lens typically neutralizes since it has a small degree of negative SA. This produces an eye with a total of zero spherical aberration. As we age, the lens changes toward less negative SA, and the eye as a whole develops a small degree of positive SA. This may be helpful since it may increase depth of field as the eye becomes presbyopic and loses accommodation.

In selecting an IOL for the eye, we have a choice of lenses with negative spherical aberration, such as Alcon’s AcrySof line and Abbott Medical Optics’ Tecnis line, or those with zero spherical aberration, such as Bausch + Lomb’s enVista, Akreos, SofPort and Crystalens lines. In eyes where we want to maximize the depth of field, there may be a benefit to the zero SA IOLs. In eyes where we want to prioritize image quality at a specific focal point, the negative SA IOLs would be selected.

Of particular importance is to remember that for a negative SA IOL to address the positive SA of the cornea, the IOL must be well-centered in the visual axis. Decentration of negative SA IOLs can induce other higher-order aberrations like coma, whereas zero SA IOLs are relatively immune to mild decentration and will not induce coma.

Because the center of the visual axis is slightly nasally displaced compared with the center of the capsular bag, it is helpful to orient the IOL in the vertical axis, with the haptics at the 12 o’clock and 6 o’clock positions, where it can be nudged nasally to achieve optimal centration (Figure 1). 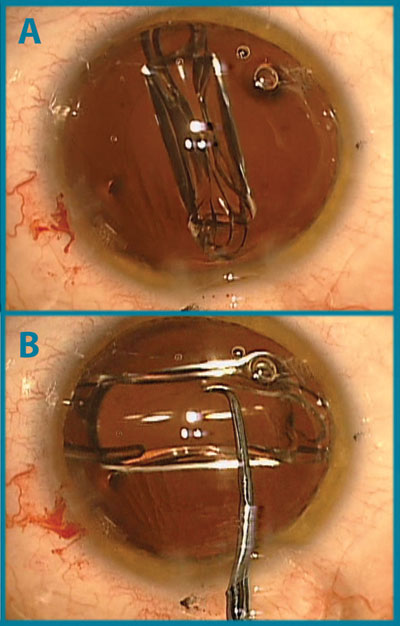 Figure 1. From the surgeon’s view: (A) This Bausch + Lomb enVista single-piece acrylic IOL is inserted via a temporal incision and placed within the capsular bag. (B) The IOL is then rotated to the orient the haptics in the superior and inferior meridians (12 o’clock and 6 o’clock orientation) in order to nudge the optic nasally to center it within the visual axis. This also facilitates removal of viscoelastic from under the optic as the IOL unfolds.

In eyes with prior keratorefractive surgery like LASIK or PRK, the laser ablation can alter the spherical aberration of the cornea. Typically, myopic ablations induce more positive SA in the cornea, whereas hyperopic treatments lessen the corneal SA. Most of the excimer laser systems we have used in the past decade have been optimized to minimize the SA changes, so extreme changes to corneal SA are now unusual. Using a negative SA IOL can help improve visual quality in eyes with prior myopic treatments. In eyes with prior hyperopic treatments, the zero SA IOL is usually the best choice, though in some cases, use of a traditional IOL with positive SA may be useful.

Some eyes have preexisting corneal aberrations or anomalies, such as scars, irregular astigmatism, corneal dystrophies or decentered ablations. Using a zero SA IOL in these eyes will do no harm in terms of higher-order aberrations, whereas a negative SA IOL may confound the existing aberrations and degrade image quality. 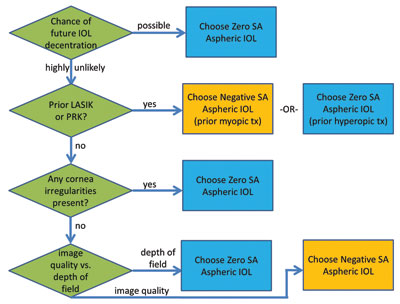 Leaving the eye with the existing mild positive SA of the cornea by implanting a zero SA IOL may provide an improvement in depth of field. There are many other factors that influence depth of field, as well, such as pupil size, other aberrations and even ambient lighting. Modulating the spherical aberration of the eye with aspheric IOLs can help us provide better visual outcomes for our patients in both routine and special cases. Surgeons should have access to both zero SA and negative SA IOLs in order to tailor the lens to each patient individually.

Uday Devgan, MD, is in private practice at Devgan Eye Surgery in Los Angeles & Beverly Hills, CA. He is also Chief of Ophthalmology at Olive View UCLA Medical Center and Associate Clinical Professor at the Jules Stein Eye Institute at the UCLA School of Medicine. He can be reached at devgan@gmail.com, www.DevganEye.com or via telephone 1-800-337-1969.

Disclosure: Devgan is a consultant and speaker for Alcon and Bausch + Lomb, and formerly for Abbott Medical Optics.