Retinal displacement, with significant effects on visual function, more often occurs when pars plana vitrectomy rather than pneumatic retinopexy is performed to treat rhegmatogenous retinal detachment, according to a study.

This new investigation was promoted by researchers at St. Michael’s Hospital in Toronto, the site of the previous PIVOT trial that demonstrated the superior visual outcomes of pneumatic retinopexy (PR) vs. pars plana vitrectomy (PPV).

“PIVOT results demonstrated that patients undergoing pneumatic retinopexy had significantly better ETDRS visual acuity at every time point, with a gain of 4.9 more letters at 1 year as compared with patients undergoing vitrectomy. What was most surprising, however, was that patients in the vitrectomy arm had significantly more vertical distortion compared to patients in the pneumatic arm at 1 year, suggesting a difference in the mechanism of retinal reattachment that may favor PR,” study author Rajeev H. Muni, MD, MSc, told Healio/OSN.

Based on this observation, a multicenter, retrospective study was carried out at three academic vitreoretinal units on 238 patients who had undergone retinal detachment surgery with PPV or PR to compare the rates of retinal displacement detected by retinal vessel printing on widefield fundus autofluorescence. 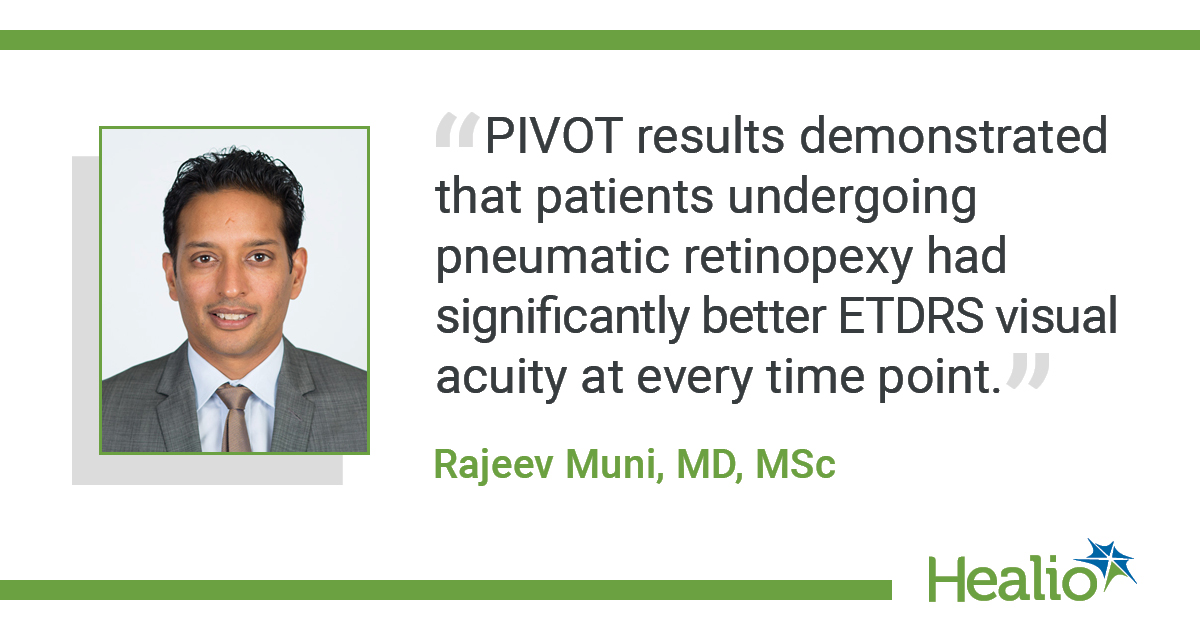 The analysis showed that retinal displacement occurred in 44.4% of the eyes in the PPV group vs. 7% of the eyes in the PR group (P < .001). Mean postoperative visual acuity was 20/40 in eyes that underwent PR and 20/72 in eyes that underwent PPV. A significant correlation was found between displacement and symptoms of distortion, particularly vertical metamorphopsia.

“We hypothesize that PR was associated with less displacement because of the smaller gas bubble used and the natural reabsorption of fluid by the RPE pump vs. the forced internal drainage during PPV with a large gas bubble,” Muni said.

HIRA is achieved when the retina is repositioned as close as possible to its original location with no retinal vessel printing visible on fundus autofluorescence, Muni said. This would presumably entail that the photoreceptors are realigned closer to their original position relative to their specific retinal pigment epithelium cell, allowing for better functional outcomes and less likelihood of vertical metamorphopsia.

“In my opinion, the days of surgeons being satisfied with the retina just being attached are over, and we should be focusing on how to increase the chances of achieving HIRA. I believe this will lead to refinements in vitreoretinal surgical techniques and improved functional outcomes for patients,” Muni said.

Many surgeons avoid PR because there is a 12% greater risk for needing a second procedure as compared with vitrectomy.

“Many want to do a procedure that has the highest chance of working the first time, but I do not agree,” Muni said. “In my view, what a surgeon should want is the procedure that is most likely to achieve a better integrity of anatomic reattachment and better functional outcomes for patients, whether one or two procedures are required.”

“Based on the this study and the PIVOT trial, we now have strong evidence that pneumatic retinopexy should be offered first line to patients meeting PIVOT trial criteria to increase the chances of achieving a high integrity anatomic reattachment and superior functional outcomes,” he said. – by Michela Cimberle