The study involved patients with DME and type 1 or type 2 diabetes from 25 clinical sites in eight countries in Europe and Israel. It evaluated the effects of the implant per injection as well as per series of injections with strict interval limitations in a real-life setting. All patients received a minimum of two Ozurdex implants (dexamethasone intravitreal implant 0.7 mg, Allergan) with 3 to 6 months between injections. Outcomes were evaluated at 3 to 6 months after individual injections and after the last of a series of injections. 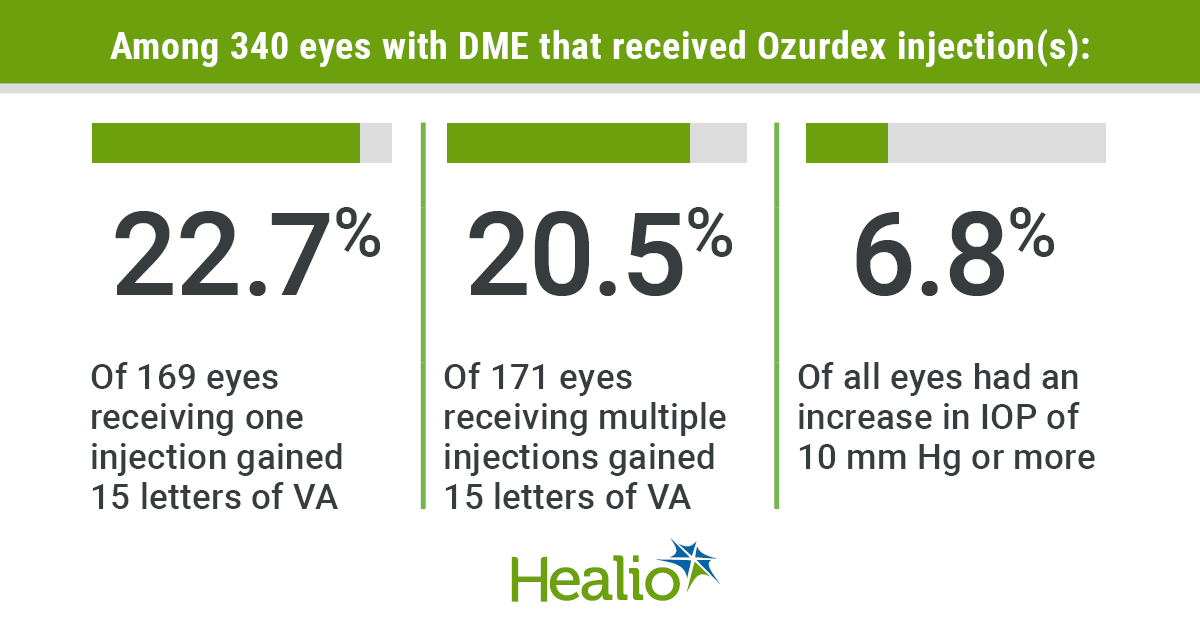 Results among 340 eyes with DME that received Ozurdex injections

Overall, the treatment resulted in significant anatomic response and visual acuity improvement. The percentage of patients experiencing a decrease in best corrected visual acuity was relatively small, with 7.6% losing more than 15 letters and 12.5% losing more than 10 letters after both single injections and series of injections. Visual acuity loss was more prevalent among patients with uncontrolled diabetes and patients with late DME, while slightly better BCVA outcomes were seen in treatment-naive eyes as compared with previously treated eyes. The implant showed a good safety profile. An IOP increase of more than 10 mm Hg was reported in 6.8% of eyes, while less than 1% had a final IOP of more than 35 mm Hg.

The per injection analysis showed that the effect of the treatment occurred rapidly and peaked in all eyes at around 3 months, dissipating thereafter. According to the authors, this might suggest that, although some of the studies suggest intervals up to 6 months, closer re-treatments might be advisable.

“We believe that both clinicians and providers should consider shortening treatment intervals,” Amir Rosenblatt, MD, first author of the study, said.

He said these definitely support the use of Ozurdex as an effective and safe treatment of diabetic macular edema.

“This was true for both treatment naïve and previously treated patients,” he said. “In addition, the subgroup analysis shows that, although anatomical outcomes were relatively similar across the different subgroups, clinicians should expect the visual gain to differ between the different patients’ subgroups.” – by Michela Cimberle

Disclosures: Rosenblatt reports he receives financial support from and is a lecturer for Allergan. Please see the study for all other authors’ relevant financial disclosures.

Editor’s note: This article has been updated to include comment from Amir Rosenblatt, MD.