Triamcinolone can play an important role in complex cataract cases

Triamcinolone is a longer-acting steroid that is used throughout medicine for its ability to control inflammation focally for long periods of time. In ophthalmology, we use triamcinolone primarily as a suspension injection that can be placed in the subconjunctival space or under Tenon’s layer, or injected into the eye in the anterior or posterior segment. In particular, triamcinolone is particularly useful in challenging cataract cases because of its particulate nature, which allows it to stick to vitreous and aid in the visualization of fluidic currents in the eye.

For many years, triamcinolone has been used as a powerful, long-acting steroid to quell inflammation in the eye. It can be injected into the vitreous cavity as a treatment for macular edema and posterior segment inflammatory conditions. When it comes into contact with vitreous, triamcinolone particles adhere to the outside of the vitreous. This makes it easier to visualize the vitreous in cases in which it is expected to be prolapsed into the anterior chamber, such as with extensive zonular trauma, lens dislocation or a violated posterior capsule (Figure 1). It is important to remember that the triamcinolone will only stain the outer, exposed area of the vitreous. This means that if a partial vitrectomy is performed, it is important to re-inject the triamcinolone for further staining intermittently throughout the procedure.

Because triamcinolone particles are easy to see, we can use them as markers to visualize aqueous flow within the anterior chamber. This is useful when checking the patency of incisions because any trickle of fluidic flowing out of the incision would be seen as the triamcinolone particles move within the anterior chamber and flow outside of the eye. In cases in which glaucoma surgery is performed, with or without an implanted drainage device, the outflow and functioning can be confirmed (Figure 2). 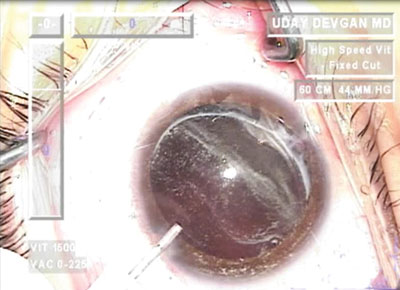 Figure 1. This patient, who is about to undergo scleral fixation of an IOL, had extensive prolapse of vitreous into the anterior chamber, as delineated by the white triamcinolone particles. An anterior vitrectomy needs to be done before IOL placement. 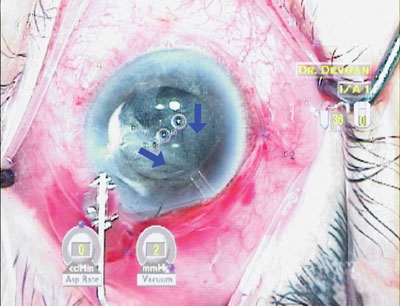 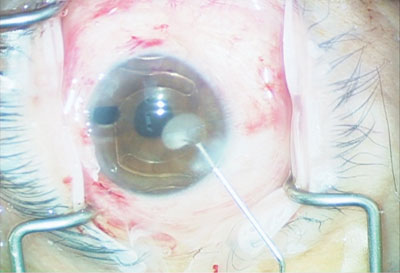 Figure 3. In this complicated case of a severely subluxed lens, an intracapsular cataract extraction was performed followed by insertion of an anterior chamber IOL. Triamcinolone is injected to confirm absence of vitreous strands in the anterior segment as well as for inflammation control postoperatively.

Besides aiding the visualization of aqueous and vitreous, triamcinolone is a potent steroid that is helpful in reducing inflammation in complicated surgical cases in which surgical times are longer and tissue manipulation is more extensive (Figure 3). Typical doses of triamcinolone range from 2 mg to 4 mg, which is 0.05 cc to 0.10 cc at a concentration of 40 mg/cc. If being injected into the anterior chamber, infusion of balanced salt solution should follow the aliquot of triamcinolone to dissipate the drug particles and ensure even distribution and staining.

Preservative-free triamcinolone is available commercially as well as from compounding pharmacies. Some surgeons have advocated using a micro-filter to wash, separate and re-suspend the triamcinolone particles from preserved triamcinolone. Another simple technique is to carefully aspirate the fluid from an unshaken bottle of triamcinolone, leaving the drug particles on the bottom of the vial, and then re-suspend the medication with balanced salt solution in order to dilute the preservative by a factor of 10 or more.

Like any drug, triamcinolone has potential side effects, including causing steroid-induced glaucoma and potentially making the eye more susceptible to infection. In the postoperative period, excessive amounts of triamcinolone may be seen embedded in iris stromal tissue or even settled in the inferior angle of the anterior chamber, which could be mistaken to be a hypopyon by unaware personnel. IOP should be monitored at the postoperative exams and anti-hypertensive drops initiated for spikes in IOP.

Triamcinolone is among the most useful adjunctive medications for complex cataract surgery and anterior segment procedures because it gives us the ability to directly visualize vitreous and aqueous as well as potently control postoperative inflammation. It even has utility in routine cataract surgeries in which there is a desire to give around-the-clock inflammation control. Visual results are a result of intraoperative technique as well as modulation of the patient’s healing response, and triamcinolone has the ability to help with both.