The incisions can aid in creating a triangular configuration of the donor graft.

Symptomatic vision-compromising corneal endothelial disease that results in corneal endothelial decompensation with a cloudy cornea combined with an absence of any significant central corneal scarring often requires surgical intervention for effective visual rehabilitation and a return to normal activities for the patient. While in the past full-thickness penetrating keratoplasty was usually the “go-to” procedure of choice, this has largely been replaced with endothelial keratoplasty techniques, which selectively replace the Descemet’s membrane and corneal endothelium, with or without any stromal tissue.

While donor tissue is effectively prepared by the eye bank, there continue to be challenges intraoperatively with DMEK surgery. Some of these challenges include unfolding the Descemet’s membrane, centration of the donor Descemet’s disc on the inner surface of the patient’s cornea, and the uniform attachment of the donor Descemet’s membrane to the inner surface of the recipient corneal stroma without any significant gaps between the donor tissue and the recipient cornea.

In this column, Drs. Hansen and Hardten describe their surgical technique of placing small relaxing incisions on the donor Descemet’s membrane to facilitate unfolding of the donor tissue in DMEK surgery.

Full-thickness corneal transplants were the standard treatment for corneal disease until the recent advances in endothelial keratoplasty, in which just the affected corneal layer can be transplanted. Descemet’s stripping endothelial keratoplasty has revolutionized the treatment of corneal endothelial disease. Recent evidence suggests an improvement in visual acuity and a decrease in rejection rate with Descemet’s membrane endothelial keratoplasty. However, transplanting just Descemet’s membrane is technically challenging. When the DMEK graft is dissected from the donor cornea, the graft forms a tight scroll, which can be difficult to unfold once it is injected into the anterior chamber. Despite several techniques having been popularized, many surgeons still find the graft unfolding difficult. We describe the use of two small relaxing incisions placed approximately 4 clock hours apart at the peripheral edge of the tissue, and we believe that this novel technique may allow DMEK to be more easily performed for those DSEK surgeons who are working to adopt DMEK.

Most techniques utilize an air bubble or manipulation of anterior chamber depth to unfold the graft. Some grafts, including those from younger donors, may be more difficult to unfold due to the tightness of the scroll that is formed. Some have suggested not using donors younger than 50 years due to the tight scroll formation. The use of the relaxing incisions in the peripheral graft forms an area where the graft can kink, which can aid in creating a triangular configuration of the graft. Air can then be easily placed under the graft to bring it up onto the posterior stroma. 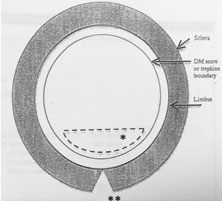 Figure 1. The single star depicts the hinge where the Descemet’s membrane is still attached. The hinge is located by the notch cut in the scleral rim labeled with the double star. 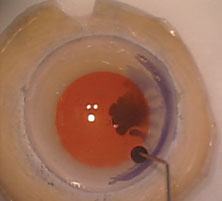 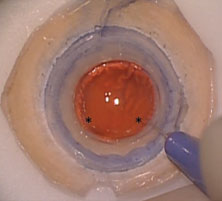 Figure 3. A 75-blade is used to make two peripheral relaxing incisions on either side of the hinge. Location of the incisions is marked with a star. 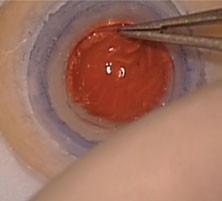 Figure 4. Non-toothed forceps are used to grasp the DMEK opposite the hinge, creating a compression mark as the graft is peeled from the donor cornea.
Source: Mark S. Hansen, MD, and David R. Hardten, MD

Descemet’s membrane is stripped from the posterior cornea with a diameter slightly larger than the desired donor tissue diameter. The tissue used in our patients had been partially prepared at the local eye bank (Minnesota Lions Eye Bank), where Descemet’s membrane is mostly dissected leaving a small adherent region (referred to as the hinge), utilizing the scuba technique. A notch is cut in the sclera indicating where the hinge is located (Figure 1). The edge of the graft is stained with trypan blue (Figure 2), and a trephination through Descemet’s and minimal stroma is completed using an Iowa Press trephine. The graft is then oriented with the scleral notch at the 6 o’clock position. At this point, a 75-blade, a super-sharp blade, or a paracentesis blade or Vannas scissors is used to cut a pair of 0.5- to 1-mm incisions from the edge of the graft about 120° apart (Figure 3). For ease of removing Descemet’s membrane, these incisions are centered around the final attachment hinge on the graft. Small forceps are then used to grasp the DMEK graft opposite the hinge at the 12 o’clock position and remove it from the donor cornea (Figure 4). While still holding the graft with tiers, the DMEK tissue is placed in trypan blue reservoir for 30 to 60 seconds to improve the visualization and orientation of the graft.

The DMEK tissue is then placed in a lens inserter (Viscoject 2.2 injector set, Medicel), and the tissue is injected into a 2.65-mm incision (Figures 5 and 6). The incision is immediately sutured with 10-0 nylon or Vicryl suture to prevent the graft from being extruded.

The tissue is then manipulated into position using bursts of balanced salt solution and shallowing the anterior chamber. With the relaxing incisions created on the graft, the tissue will typically form a trifold (Figure 7). The trifold tissue is centered using brisk strokes across the cornea with a cannula. The orientation is then checked with a hand-held slit lamp, or the S-stamp is identified. Once the tissue is centered and in the trifold, a small air bubble is placed posterior to the graft (Figure 8). The pressure from the bubble will then assist in unfolding the remaining graft edges. Once the graft has unfolded, the anterior chamber is filled with air (Figure 9). 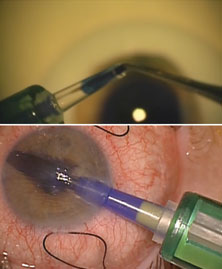 Figures 5 and 6. The graft is dropped into the lens cartridge and injected into the anterior chamber. 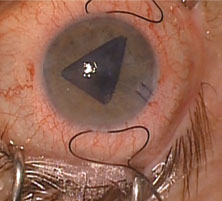 Figure 7. The trifold orientation is easily created due to the relaxing incisions. 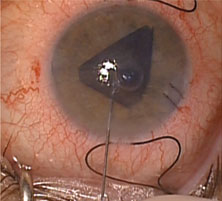 Figure 8. A small air bubble is placed behind the graft to assist in unfolding the remainder of the graft. 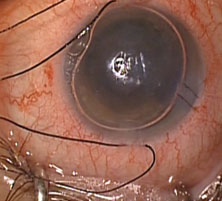 Figure 9. The graft is unfolded, and the anterior chamber is filled with air.

This new technique makes the DMEK graft easier to unfold, especially in young donor tissue, increasing the comfort and confidence of the surgeon when using younger donor tissue. As we have introduced this technique to our regular surgical procedure, the manipulation time has decreased significantly. This has also assisted in newer surgeons being able to more easily adopt the DMEK procedure without the extensive learning curve that has been described.

With the two incisions and the compression mark from grasping the tissue with the tiers, the graft naturally wants to form the trifold. Once in the trifold orientation, the air bubble can easily unfold the remaining edges. Careful attention should be made to not extend the relaxing incisions beyond 0.5 mm to 1 mm because a notch can tear from the graft when removing Descemet’s membrane from the donor cornea.

The incisions have been examined postoperatively, and there does not appear to be any tendency for the graft to separate in the early postoperative period in this region more than other regions. We do not find any reason to orient the tissue inside the eye specifically based upon the relaxing incisions. A prospective randomized study would be required to determine whether the endothelial cell preservation is improved through the reduction in time and tissue manipulation afforded by this technique. As more surgeons have been adopting this technique, the moniker “Hansen hinges” has been used to describe the relaxing incisions. Some eye banks are now preparing tissue with precut hinges. The relaxing incision (Hansen hinges) DMEK surgery technique will help surgeons have a smoother transition to adopting DMEK surgery.