Piggyback IOL can be placed at time of cataract surgery or staged later.

The three variables in IOL calculations are the power of the existing cornea, the axial length of the eye and the effective lens position.

It is a challenge in any lens power calculation to predict the final resting position of the IOL based on preoperative measurements. In an eye with a long axial length, the effective lens position (ELP) is not as critical because a small movement of the IOL in the anterior-posterior dimension, coupled with the lower power IOL used in these axial myopes, only mildly alters the final refractive outcome. However, in an eye with a short axial length, the IOL power is typically higher and even a slight change in the ELP can have a significant effect on the refractive results.

The best formulas for small eyes are the ones that most accurately predict ELP. The third generation formulas use just two input variables, the keratometric power and the axial length, to determine the ELP and the power calculation. Of these, the HofferQ tends to be the most accurate when the axial length is less than 22 mm. Fourth generation formulas use multiple input variables in addition to the keratometry and axial length measurement. The Haigis formula requires anterior chamber depth (ACD) as a variable, while the Holladay 2 formula requires ACD as well as white-to-white measurement, lens thickness, refraction and age. These fourth generation formulas, particularly the Holladay 2, are preferred when calculating lens power in small eyes.

Multiple IOLs are FDA approved in powers greater than +30 D in a variety of platforms, designs and materials. There is even a single-piece acrylic IOL, the Alcon AcrySof SN60AT, that is available in powers up to +40 D. When possible, implanting a single +40 D IOL is preferred over polypseudophakia with two +20 D IOLs because room is limited in these small eyes. In some countries, IOL manufacturers custom-make very high power IOLs according to physician’s orders. This has been difficult in the US and we must employ other options. 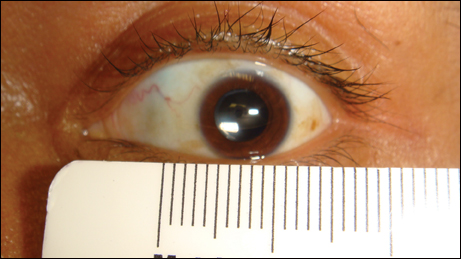 This nanophthalmic eye has a white-to-white measurement of just 8 mm and there was not sufficient room for placement of a piggyback IOL. The patient received a +40 D single-piece acrylic IOL in the capsular bag and wears spectacles for the residual hyperopia.

In some small eyes, the power calculations will call for an IOL power of more than +40 D and the surgeon must decide how best to correct the refractive error. The options are piggyback IOLs or simply implanting the highest power IOL available and having the patient use other options to correct the remaining refractive error. If it is a small degree of residual hyperopia, laser vision correction may be possible; otherwise, common options are spectacles or contact lenses.

If the calculated IOL power is just a little beyond +40 D, then it may be better to implant that single, maximum power +40 D IOL into the capsular bag and then wait to determine the stabilized refractive state of the eye. Because the lens power calculations are less accurate in these small eyes, the stabilized refractive state may be closer to or farther from the intended postoperative refractive target. If the patient still has a sizable refractive error and there is room in the ciliary sulcus, then a second procedure can be scheduled to implant a piggyback IOL.

Piggyback IOLs are an option to increase the refractive power but care must be taken to minimize complications. Primary placement of two IOLs within the capsular bag has been associated with interlenticular membranes and opacification, reduced visual acuity and a late hyperopic shift. Interlenticular membranes are difficult to address with YAG laser, and often an additional intraocular surgery is required to clear this opacification. For these reasons, the current recommendation for a piggyback IOL is to place one IOL in the capsular bag and then the second IOL in the ciliary sulcus. Outside the U.S., some IOLs are specifically designed and indicated for placement in the sulcus. In the U.S., however, three-piece IOLs are placed in the sulcus in an off-label manner.

There is a debate as to which material or combination of materials is best, but typically an acrylic IOL, either one-piece or three-piece, is placed in the capsular bag with a three-piece silicone IOL placed in the ciliary sulcus. The sulcus-based IOL should be three-piece in design, with angulated haptics and a rounded edge to minimize damage to the posterior surface of the iris. If the sulcus IOL scrapes the back of the iris, then pigment dispersion, iris transillumination defects and even uveitis-glaucoma-hyphema (UGH) syndrome may result.

Some piggyback IOL choices include the STAAR AQ-2010, which has an enlarged 6.3-mm silicone optic and a longer 13.5 mm length; the AMO Sensar, which features a rounded front edge of the optic, and the Bausch + Lomb Li61, which has a 6-mm silicone optic and a choice of either aspheric optics with a square edge (Li61AO) or non-aspheric optics with a rounded edge (Li61u).

The piggyback IOL can be placed at the time of the original cataract surgery or it can be staged for later. Because lens power calculations are challenging and less accurate in these small eyes, it may be advantageous to do the cataract surgery with implantation of a maximum power lens in the capsular bag and then to allow the eye to heal. Once the postoperative refractive state has stabilized, the calculation for the piggyback IOL is more accurate and the surgeon can evaluate whether there is in fact sufficient room in the sulcus for the additional IOL. The calculations for the piggyback IOL can be done using the refractive vergence calculation with the Holladay IOL consultant or it can be estimated using the Gills or Nichamin nomograms.

Every step should be taken to protect the capsular bag during phacoemulsification because the options for alternate lens fixation are limited: there may not be sufficient room for an anterior chamber IOL and if the primary IOL must be placed in the sulcus then there will likely not be room for a piggyback IOL. Also surgeons should learn from the first eye and use that data to hone the IOL calculations for the second eye. As long as both eyes have similar preoperative biometric readings, they are likely to have the same final ELP.