A surgeon shares two cases in which MicroPulse transscleral cyclophotocoagulation was used in younger patients.

Traditional diode transscleral cyclophotocoagulation has been deeply ingrained as a procedure intended for patients with severe end-stage glaucoma and poor vision.

However, I have become increasingly comfortable using MicroPulse (Iridex) transscleral cyclophotocoagulation (MP-TSCPC) in earlier-stage glaucoma and in patients with good vision, including patients who have not had prior incisional glaucoma surgery. I have also found that is has been a useful option in patients with contraindications to more invasive surgery or who want to defer surgery for various reasons. Patients who have already undergone a tube shunt are also good candidates as they do not have many other treatment options available for further IOP control. MicroPulse provides an efficient and effective alternative to glaucoma surgery and can be repeated if necessary.

Because of the high safety profile, combined with the minimal postoperative pain and inflammation I have seen after MicroPulse, I feel confident enough to perform bilateral procedures in a single visit. With a standard post-cataract dose of steroid, I have found that the majority of my patients have little to no anterior chamber inflammation 1 week postoperatively. 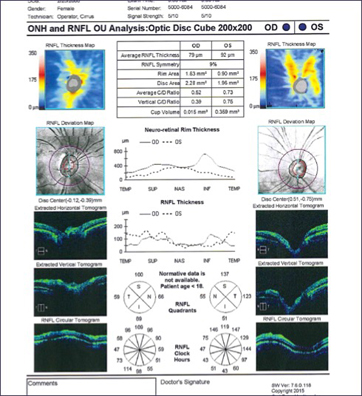 A 39-year-old African-American man presented with severe-stage glaucoma in his left eye. He was on four medications with an IOP of 26 mm Hg. He had undergone previous surgery with a Baerveldt implant (Johnson & Johnson Vision) and had poor vision in his right eye. Visual acuity in the left eye was 20/30, and he had visual field damage, significant cupping, thin corneas and thinning seen on OCT. He was interested in treatment, however, due to the pain, inflammation and poor vision resulting from the surgery in his right eye, and he refused incisional surgery in the left.

I suggested MP-TSCPC with the Cyclo G6 (Iridex) with confidence that the procedure would have minimal risk in terms of significant pain or inflammation compared with incisional surgery. Preoperatively, the patient was given Ocufen (flurbiprofen ophthalmic, Allergan) and topical lidocaine gel. The patient received monitored anesthesia care as well as a small retrobulbar injection of a 50/50 mix of lidocaine and Marcaine (bupivacaine hydrochloride, Pfizer). I treated him with the MicroPulse at 2,000 mW, applying 80 seconds of laser per hemisphere using a slow sweeping motion. Postoperatively, the patient was given Durezol (difluprednate, Alcon) twice daily for the first week and once daily the second week. At his postop week 1 follow-up, his IOP had reduced to 12 mm Hg, and he had experienced no pain or inflammation. At postop month 6, his medications had been reduced and his IOP was 15 mm Hg on three medications. Visual acuity remained 20/30.

We have been pleased with his outcome. The patient experienced a significant decrease in pressure and has been able to eliminate one medication. Additionally, as he did not experience any significant operative or postoperative pain, inflammation, vision loss or other adverse events, he is not opposed to repeating this procedure in the future to further reduce his pressure. 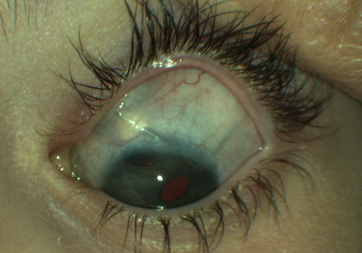 An 11-year-old white girl with congenital glaucoma was referred for uncontrolled pressure in her left eye. IOP was 27 mm Hg on four medications. Her surgical history included cataract extraction, IOL, goniotomy and two superior Ahmed valve (New World Medical) implantations. Her visual acuity was 20/60 with a full visual field, a cup-to-disc ratio of 0.75, corneal thickness of 660 µm and thinning seen on OCT. Due to her numerous previous procedures, her parents were reluctant to perform further incisional surgery.

Again, because of its safety and efficacy profiles, MP-TSCPC was an ideal option for this patient. The patient was given the same preoperative medications as in the first case. She was then treated at 2,000 mW, applying the laser at 80 seconds in the inferior hemisphere and 50 seconds superiorly while care was taken to avoid the tube implantation sites. At her postoperative week 2 follow-up, her IOP had decreased to 18 mm Hg. At her 1-month visit, her IOP was 19 mm Hg, which was still a significant reduction from baseline. Her visual acuity remained at 20/60, and she remained on four medications. While there was no decrease in medications, the treatment did significantly reduce her IOP with no pain, inflammation, vision loss or other side effects, and we have the option to repeat the treatment in the future as needed.

In terms of laser parameters, I advise performing this procedure as directed by the company when first starting out. Surgeons can gain confidence and familiarity with the technology and can titrate the power and time as necessary. More experience with the procedure will allow surgeons to choose which elements of the process work best for them. For instance, I no longer use a lid speculum as I feel it prevents me from easily sweeping the probe across the globe. I have not found any issues with the lid getting in the way without the speculum as the probe pushes it out of the way as I sweep. I have also incrementally increased my total laser time and sweeping time per hemifield in certain patients.

While MicroPulse treatments can be performed in-office, being in the operating room setting is advantageous. In my early cases, I used a retrobulbar block in addition to monitored anesthesia care (MAC). My anesthesia team has discovered that using a small amount of ketamine in addition to the customary MAC medications is helpful in keeping patients comfortable, and I now rarely use a block. Postoperatively, patients have been comfortable, even my more recent patients who did not receive a block.

Overall, I have found great success with this procedure. In my experience, I have not encountered hypotony, phthisis, significant vision loss, refractory inflammation or marked postoperative pain as can be experienced with traditional diode cyclophotocoagulation. I have found this treatment to be safe and efficacious, including in earlier-stage patients with good vision. I feel that MicroPulse is a useful tool in my armamentarium to treat glaucoma.

Disclosure: Sieminski reports she is a speaker for Iridex.