Understanding the angles of the eye will maximize optical performance and avoid halos and glare.

Proper centration of premium IOLs — diffractive multifocal, moderate to high toric, and aspheric — is critical to achieve the maximum optical performance and to avoid unnecessary symptoms of halos, glare and “waxy vision.” To understand and use the optical principles involved with these complaints, we must review the angles of the eye.

In Figure 1, we see a cross-section of the eye from above illustrating that the foveola is temporal to the optical axis of the eye by a nominal 5.2°. From the front view of the eye in Figure 2, we see that the reflection of a penlight (white circle with blue cross known as Purkinje 1) with the patient fixating on the light and the observer coaxially viewing will be slightly nasal and is labeled visual axis (VA) because the line connecting the foveola with the object passes through this point on the cornea. The pupil center (PC) to VA is known as angle κ or more recently chord length µ. The angle between the optical center of the cornea (OC) and VA is angle α. Arguments about determining these angles and chord lengths are not particularly helpful clinically, but are fully explained by Chang and colleagues. The clinician only needs to remember the image seen in Figure 2.

Angle κ (chord length µ) and angle α (chord length α) are given on the IOLMaster (Carl Zeiss Meditec), Lenstar (Haag-Streit) and most topographers/tomographers as shown in Figures 3 and 4, using x and y Cartesian coordinates. VA is nominally ~0.3 mm nasal to PC, and VA is nominally 0.6 mm nasal to OC, which is considered to be the center of the limbus (or visible iris). Because the limbus is not completely visible in most images, the OC value is somewhat variable and less precise. The total angle κ (chord length µ) is the value to be evaluated and is the diagonal (hypotenuse) or square root of the sum of the squares of the x and y values (Pythagorean theorem). However, the sum of the x and y values is a “close enough” approximation. 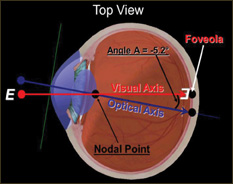 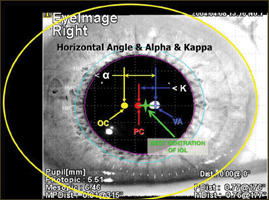 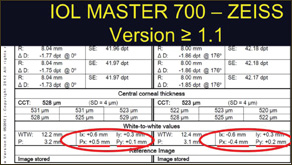 The ideal location of an IOL is when it is centered on the visual axis and pupil, which is not possible unless angle κ (chord length µ) is zero (extremely rare, but occurs when the light reflex is dead center in the pupil). The next best or optimal centration for a non-zero angle κ for any IOL is for its center to be between PC and VA, as shown in Figure 2. This location is easy to see with a diffractive IOL because it would be the location of the center of the diffractive rings. For the IOL to be in this location, it must be nasally decentered in-the-bag because the bag is centered on the optical axis. For the nominal values above, the IOL would be 0.15 mm nasally decentered relative to the pupil (one-half angle κ) and 0.45 mm nasally decentered in the bag (0.60 minus 0.15). The surgical technique to achieve this nasal location requires nudging the haptics so they are closer together nasally in the bag fornix than temporally. Simply pushing the optic nasally is temporary with self-centering IOLs.

Optimal centration between PC and VA is an optical compromise. Two articles have found that if angle κ (chord length µ) is large (≥ 0.6 mm), a high percentage of subjective complaints occur from halos and glare even with proper centration of the IOL. This is because the optimal centration between PC and VA is associated with a decrease in optical performance the greater the angle κ. The compromise is most critical for diffractive IOLs, followed by high toric and then aspheric.

Take-home message: Evaluate angle κ (chord length µ) measurements on every patient, and when the sum of the x and y values is greater than 0.6 mm, repeat and confirm the measurement and make the appropriate decision regarding the use of a premium IOL that is consistent with the patient’s expectations and optical performance of the IOL.