A 62-year-old white man was referred to the retina clinic for evaluation of rapid decreased vision of his left eye occurring 5 days before presentation.

The patient reported noticing a dark area of his vision in his left eye while he was watching television. He denied any eye pain. A review of systems was negative for fevers, chills, weight loss, night sweats, jaw claudication, scalp tenderness, diplopia and myalgias. He was seen by an outside ophthalmologist who started him on oral prednisone and timolol in the left eye for reasons that were “unclear” to the patient. He reported a vague history of a mechanical fall onto his back a few weeks prior but denied any head or eye trauma. Additionally, he reported noticing a gum abscess with purulent drainage the same day that his vision declined. The patient denied any steroid use or heavy lifting. He reported stopping taking his hypertension medications approximately 6 months prior, which he restarted once he began having these visual symptoms.

His ocular history was remarkable only for mild myopia and astigmatism. His medical history was remarkable for hypertension, gout, hyperlipidemia and a transient ischemic attack years prior, which manifested as an acute loss of balance. His chronic medications included colchicine, lisinopril, simvastatin and aspirin. He was recently started on penicillin V for his gum abscess. He did not smoke, drank socially, denied recent travel and was in a monogamous relationship with his wife of many years.

The patient’s corrected visual acuity was 20/20 in the right eye and counting fingers at 4 feet in the left eye. Pupils were round and reactive to light with no afferent pupillary defect in either eye. IOP was 13 mm Hg in the right eye and 12 mm Hg in the left eye. Anterior segment exam was remarkable only for mild cataracts in each eye. Dilated funduscopy of the right eye was unremarkable. In the left eye, there were peripapillary cotton wool spots and retinal whitening in the macula, most predominant in the perifoveal region. The optic nerve did not appear swollen, and the arteries were noted to be mildly attenuated (Figure 1). 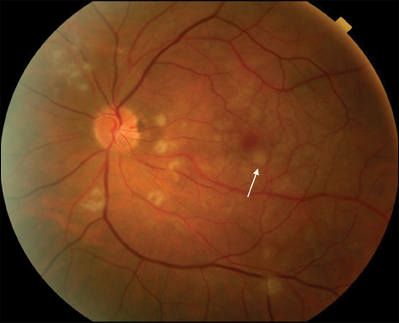 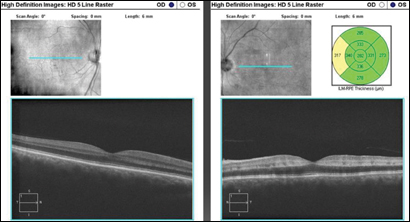 A broad work-up was performed. A stat ESR and CRP were both normal; CBC, LFTs, electrolytes, HgA1c, amylase/lipase, hepatitis panel, HIV antibodies, rheumatoid factor, ANA, ANCA, RPR, FTA antibodies, toxoplasma titers, Lyme titers, ACE and dsDNA were all normal; lipid panel was consistent with a history of moderate hyperlipidemia; QuantiFERON Gold was indeterminate; and complement C5a was markedly elevated at 106.5 mg/dL (reference range: 4.7 to 9.5). The patient had a normal chest X-ray and transthoracic echocardiogram, an MRI/MRA of his head showed chronic microangiopathic changes, and a carotid ultrasound revealed less than 50% stenosis bilaterally.

The only remarkable finding was a markedly elevated complement C5a level. Given the combination of the patient’s history, C5a hypercomplementemia in the setting of an otherwise unremarkable work-up and anatomical retinal findings, the diagnosis of Purtscher or Purtscher-like retinopathy was made. Even with that diagnosis, it is vital to identify the underlying cause, if possible.

Purtscher retinopathy was first described in 1910 by German ophthalmologist Otmar Purtscher as an occlusive microvascular retinopathy associated with trauma. It is now known to be seen, more specifically, in the setting of cranial trauma and thoracic compression. However, similar retinal findings have been seen in patients without a history of trauma, most commonly with acute pancreatitis, renal failure, disseminated intravascular coagulopathy, thrombotic thrombocytopenic purpura and autoimmune diseases. In these cases, patients are denoted to have Purtscher-like retinopathy. For the purposes of our discussion, we will designate Purtscher retinopathy to include both traumatic and non-traumatic etiologies.

Similar to the patient here, patients with Purtscher retinopathy typically present with sudden, painless vision loss 2 to 48 hours after the causal pathology. Typically, findings are seen bilaterally, although it is not uncommon for them to present unilaterally. Miguel and colleagues performed a systematic review of Purtscher retinopathy and found that the pathology is typically confined to the posterior pole and immediately nasal to the optic disc. The most common retinal findings were identified as cotton wool spots (present in 93% of patients), retinal hemorrhages (65% of patients) and Purtscher flecken (63% of patients and frequently underreported). Among cases reported in the literature through 2013, 33% were a result of trauma, 19.1% secondary to acute pancreatitis, 8.8% associated with Valsalva maneuver and 7.3% associated with thrombotic thrombocytopenic purpura. Other less common etiologies included hemolytic uremic syndrome, pregnancy-related HELLP syndrome and lupus.

Purtscher flecken are considered pathognomonic for Purtscher retinopathy and were originally described in 1940 by Michaelson and colleagues as polygonal areas of retinal whitening at the level of the inner retina that have a characteristic clear zone without retinal whitening in the immediate region of the retina (on average about 50 µm) surrounding the arterioles. Given the multifocality of these lesions and their restriction to the posterior pole, as well as occlusive disease demonstrated on fluorescein angiography, it is thought that Purtscher flecken are the result of an embolic phenomenon. The occlusion in Purtscher retinopathy is thought to take place at the level of the pre-capillary arterioles (approximately 45 µm in diameter), resulting in whitening in the areas of distal capillary beds, with normally perfused retina closer to the arterioles. Occlusions proximal to the pre-capillary arterioles produce confluent whitening, such as that seen in a branch retinal artery occlusion, and occlusions distal to pre-capillary arterioles produce cotton wool spots, which obscure the underlying vessels.

Some reports speculate that Purtscher retinopathy is due to leukoembolization that occurs as a result of complement activation in the setting of trauma and many of the other causative entities noted previously. Behrens-Baumann and colleagues performed an experimental study in which they demonstrated that the injection of intermediate-sized emboli into cat and pig eyes produced the whitening that is characteristic of Purtscher flecken. Emboli that are of intermediate size and capable of occluding pre-capillary arterioles include air, fat, leukocyte aggregates, platelets and fibrin.

The presence of Purtscher flecken in our patient in the setting of C5a hypercomplementemia solidified the diagnosis of Purtscher retinopathy. Given the patient’s history of a fall and his gum abscess in the setting of an otherwise negative work-up, it is likely that trauma from the fall, inflammation from the gum abscess or a combination of the two activated the patient’s complement cascade, inciting leukoembolization of the pre-capillary arterioles of his left retina. Six months after presentation, the patient’s best corrected visual acuity was 20/400 in the affected eye, and OCT demonstrated pronounced inner retinal atrophy (Figure 4).