Anisocoria in a pediatric patient after bounce house accident

The boy fell 15 feet after an unsecured bounce house was lifted into the air by the wind.

The ophthalmology service at Tufts Medical Center was consulted for a “blown pupil” in the right eye of a 2-year-old boy. He was admitted to the pediatric intensive care unit after falling approximately 15 feet from an unsecured bounce house that was lifted into the air by a gust of wind.

When emergency medical services arrived, the patient was found lying on his back, minimally responsive with a weak cry and shallow breathing. He was intubated in the field, and atropine was used before intubation. The dilated right pupil was noted by EMS before arrival at the hospital, but the timing of the onset of the dilated pupil was unclear.

The initial ophthalmologic examination was limited because the patient was sedated and intubated. The right pupil was 7.5 mm, round and unreactive to light (Figure 1). The left pupil was 3 mm, round and reactive to light, constricting to 1 mm. There was no relative afferent pupillary defect. Alignment appeared orthophoric. Extraocular motility by vestibulo-ocular reflex could not be assessed because there was a cervical collar in place. There was no periorbital ecchymosis, swelling or laceration. Portable slit lamp exam of the anterior segment revealed no evidence of uveitis or hyphema. The dilated fundus exam was normal with no optic nerve head edema.

Blunt trauma to the eye can result in tears of the iris sphincter, causing a dilated pupil that is unreactive to light. In these cases, torn or serrated pupillary margins or iris transillumination defects are usually seen on slit lamp examination.

Asymmetric topical exposure to anticholinergic or adrenergic drugs can cause a pharmacologic anisocoria. Agents include atropine, transdermal scopolamine patches, nebulized ipratropium and albuterol with ill-fitting masks, and pseudoephedrine.

In Adie’s tonic pupil, there is damage to the ciliary ganglion or the short ciliary nerves, which is followed by aberrant regeneration. The pupil shows poor segmental constriction to light, cholinergic supersensitivity, slow pupillary response to near and slow redilation.

Third cranial nerve paresis with pupil involvement is suspicious for intracranial compression of the nerve and is always associated with ptosis and/or extraocular muscle involvement. Etiologies include aneurysm, tumor and trauma.

Initially, the use of atropine before intubation seemed suspicious as the cause. Atropine is often used in children as pretreatment for rapid sequence intubation to prevent bradycardia and asystole despite controversial evidence regarding its efficacy. The dosage used is typically 0.02 mg/kg intravenously. Unless atropine was accidently administered directly to the right eye, this seemed to be an unlikely cause of the marked anisocoria. Traumatic pupillary sphincter damage was also considered but seemed unlikely given lack of other evidence of direct trauma to the right eye. Adie’s tonic pupil also did not seem likely given the acute onset related to the history of trauma. Dilute pilocarpine testing could have been performed to rule it out but, given its low likelihood, was deferred.

There was high suspicion for a traumatic right third nerve palsy; however, ptosis and extraocular motility could not be fully assessed at first because the patient was heavily sedated. While this was highest on our differential, there have been multiple case reports of patients with suspected traumatic third nerve palsies after minor head trauma that were subsequently found to have aneurysms or tumors on imaging. A history of trauma does not rule out an aneurysm or tumor.

The patient’s initial CT scan of the head showed subarachnoid hemorrhage that was seen tracking within the left frontal lobe sulci, but no significant mass effect was seen. The ophthalmology team requested an MRI/MRA of the brain to rule out an aneurysm. This again showed a small amount of subarachnoid hemorrhage that had redistributed to both frontal lobes but without definite new hemorrhage. MRI also showed multiple areas of decreased diffusion in both frontal lobes, both insular cortices, the right temporal lobe and the left parietal lobe. Multiple punctate areas of FLAIR hyperintensity and corresponding T1 hypointensity were also present in the left insular cortex, concerning for punctate hemorrhage (Figure 2). These findings were thought to be consistent with diffuse axonal injury. No aneurysms were identified on MRA.

Once the patient was extubated and awake, he was noted to have complete ptosis of the right upper lid with no evident levator function. There was no ptosis of the left upper lid. He also had a large right exotropia and possibly small right hypotropia (“down and out”) with no adduction, infraduction or supraduction (Figure 3). It was difficult to assess for right fourth cranial nerve function.

The patient was diagnosed with a complete traumatic right third nerve palsy presumably due to irritation from the subarachnoid hemorrhage or compression of the third nerve at the time of the injury, although no mass effect was noted on imaging. 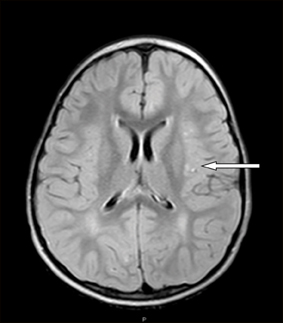 Traumatic third nerve palsy can occur from either direct injury to the nerve itself or indirect injury. Causes of direct injury include nerve root avulsion, direct fascicular damage or disrupted blood supply causing ischemic damage. Indirect injury is usually the result of compression or displacement of the nerve by a lesion such as an aneurysm or an expanding hematoma.

Previous studies have shown that traumatic oculomotor nerve palsy can occur in the absence of any abnormal findings on brain imaging, although this tends to be rare. Imaging is necessary because, as discussed previously, a history of trauma does not rule out an aneurysm or tumor as the cause of the nerve palsy.

The prognosis of traumatic third nerve palsies is typically poor. Tokuno and colleagues showed that none of the 10 patients in their study achieved full recovery after 18 months of follow-up, while Memon et al showed that only one of 12 patients recovered fully after 6 months to 3 years of follow-up. These studies showed that the most likely deficit to recover is levator function, followed by extraocular motility. Pupillary function is the least likely to recover. Without good supraduction and Bell’s phenomenon, surgical treatment of ptosis may lead to corneal exposure and must be considered cautiously.

In pediatric patients, additional concerns include dense amblyopia due to ptosis and strabismus. Again, the prognosis is poor. Patching of the unaffected eye is recommended as much as possible. Patients should be monitored for at least 6 months before consideration of surgical treatment.

The patient was discharged to a rehabilitation facility after a 2-week stay in the pediatric intensive care unit. Three weeks after the accident, there was no improvement in his ptosis or extraocular motility. The patient’s parents were advised to try taping his right upper lid open and patch his left eye 1 to 2 hours a day for amblyopia treatment. Five weeks after the accident, his parents reported effectively taping open the right upper lid but had not been successful at patching the left eye. He seemed to be using his frontalis muscle to open his right lid more, and his pupil appeared slightly less dilated. There was minimal improvement of adduction; however, he still demonstrated poor Bell’s phenomenon. He is still being followed closely by pediatric ophthalmology.