A 55-year-old woman was referred to the New England Eye Center with symptoms of progressive blurred vision and difficulty with night driving, noticed primarily in the right eye. The vision changes started 4 to 5 days prior and seemed to be slowly worsening. She denied any eye redness, pain, metamorphopsia, scotomas, flashes or floaters. She was on no medications. Her medical and family histories were unremarkable.

The patient’s best corrected visual acuity was 20/30 in the right eye and 20/30 in the left eye. Pupillary exam, extraocular movements, confrontation fields and IOPs were normal. Anterior segment examination was unremarkable. Funduscopic exam revealed a few peripapillary drusen in both eyes as well as a subtle orange-red lesion superior to the optic nerve of the right eye with subretinal fluid (SRF) extending over the papillomacular bundle. Additionally, within the SRF, there was layered yellowish material inferonasal to the macula (Figure 1).

Figure 1. Color fundus photographs demonstrating peripapillary drusen in both eyes and an orange-red lesion superotemporal to the right optic nerve. There is also SRF over the papillomacular bundle with layering yellowish material inferonasal to the macula. 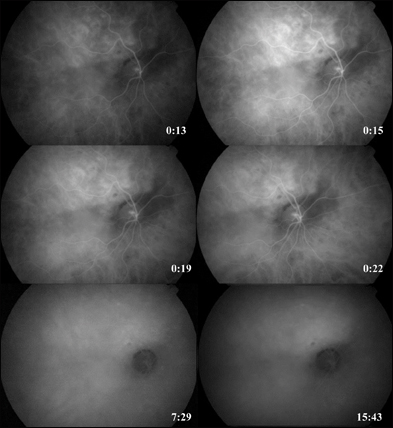 Figure 4. Fundus autofluorescence showing hyperautofluorescent subretinal deposits over the lesion and layering within the SRF. There is also blockage noted from the drusen bilaterally. 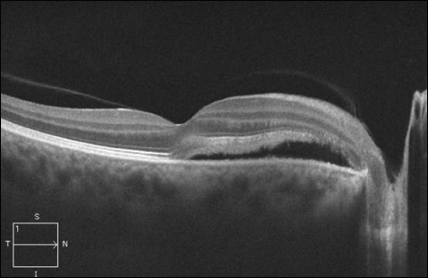 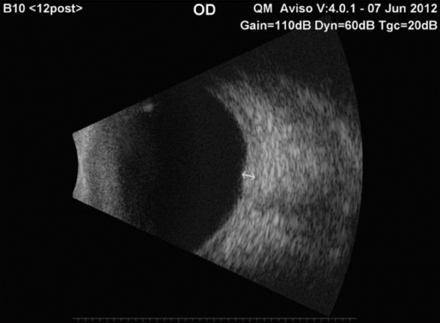 The diagnosis of a circumscribed choroidal hemangioma can be made clinically based on the typical funduscopic appearance of a subtle orange-red mass with a predilection for the posterior pole. However, these tumors can be misdiagnosed, and confirmatory testing is of benefit.

The classic fluorescein pattern of a circumscribed choroidal hemangioma features early filling of the vascular channels within the lesion in a “coarse vascular” or “spotty” pattern that persists in later frames. Hypofluorescence outlining the lesion, thought to correlate with melanocytes that have been pushed to the margin of the tumor, can also be seen. Findings on indocyanine green angiography imaging include early hyperfluorescence (average at 27.6 seconds with peak at 222 seconds) followed by a hypofluorescent “washout” phase and a late hyperfluorescent rim. Fundus autofluorescence shows scattered hyperautofluoresence of accumulated deposits and hypoautofluorescence of atrophic retinal pigment epithelium (RPE) or RPE hyperplasia. Enhanced-depth OCT can help to characterize SRF or macular edema and also typically shows a medium to low reflective choroidal band with a homogenous signal and intrinsic spaces. B-scan classically reveals a dome-shaped, homogenous, hyperechoic lesion.

Choroidal hemangiomas are vascular hamartomas that may present in two distinct forms: a discrete or circumscribed form and a diffuse form. Diffuse choroidal hemangiomas are usually evident at birth and typically occur as part of neuro-oculocutaneous hemangiomatosis, or Sturge-Weber syndrome. The circumscribed form typically presents in the second to fourth decade of life, is sporadic and occurs in the absence of systemic disease. In 2001, Shields et al reviewed the clinical manifestations of patients with circumscribed choroidal hemangiomas. They found that up to 6% were asymptomatic on presentation. Those with symptoms presented with decreased acuity (81%), visual field defects (7%), metamorphopsia (3%), floaters (2%), and progressive hypermetropia or photopsias (less than 1%). In this series, they also reviewed important factors predictive of visual outcome. Factors correlating with good visual recovery included shorter duration of symptoms and an inferior location of the tumor. Poor prognostic factors included presenting visual acuity of 20/200 or worse, failure of previous laser photocoagulation, or presence of chronic retinal or RPE changes.

As reviewed above, the classic funduscopic appearance of these lesions is a subtle orange-red mass with a predilection for the posterior pole. Additionally, they may have small white foci on the surface thought to represent fibrous metaplasia of the overlying RPE and/or a brown rim representing compression of the normal uvea. Patients often present with macular edema or serous retinal detachments. Subretinal deposits may also be seen. These were prominent in this case, with pooling of turbid SRF and yellow hyperautofluorescent deposits.

It is theorized that these deposits are composed primarily of outer segment debris. Normally, the RPE would clear this debris through phagocytosis. However, in pathologic conditions in which SRF separates the RPE from the outer segments, the RPE can no longer perform this function, leading to the accumulation of extracellular debris. As clarified in a review of autofluorescence by Spaide in 2008, this material cannot technically be called lipofuscin because lipofuscin by definition is intracellular. These deposits are a nonspecific finding and can potentially be seen in any disease leading to SRF and separation of the RPE from the outer segments. These hyperautofluorescent deposits have been described in choroidal hemangiomas, adult-onset foveal macular dystrophy, central serous chorioretinopathy, choroidal nevi and melanomas, optic pit maculopathy, Best’s disease, exudative polymorphous vitelliform maculopathy, cystoid macular edema, tractional and serous retinal detachments, and choroidal neovascularization. On OCT, this material can be identified as distinct granular deposits in the subretinal space.

The decision to treat circumscribed choroidal hemangiomas is often based on the location, size and severity of symptoms. Often, asymptomatic hemangiomas that have no associated SRF are managed by observation. Additionally, some advocate observation for advanced hemangiomas with associated poor visual potential. However, there is a risk with chronic SRF to develop choroidal neovascularization. Treatment modalities currently utilized include xenon or argon laser photocoagulation, transpupillary thermotherapy (TTT), photodynamic therapy and radiotherapy (external beam, proton beam or plaque). PDT is favored by many clinicians given the long-term data showing a high rate of success (73% to 100% improvement or stabilization of BCVA) and a limited toxicity profile. Anti-VEGF agents have recently been described as a potential treatment option for circumscribed choroidal hemangiomas. However, the available data are limited in numbers and length of follow-up. 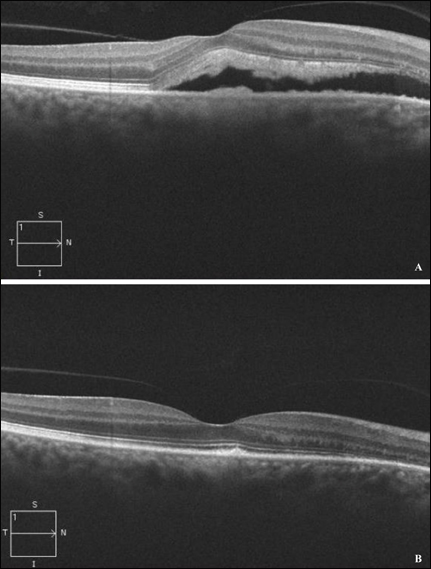 After the initial presentation of our patient, the decision for observation was made given her good visual acuity. She returned 3 months later with complaints of worsening vision in the right eye and a BCVA of 20/40. Her OCT at that time showed further extension of SRF under the fovea (Figure 7a). A decision was made to proceed with PDT. At her 5 month post-procedure follow-up, she had complete resolution of SRF and a BCVA of 20/20 (Figure 7b).