A sleeveless-extrusion cannula is placed on top of the IOL and suction is increased to 300 mm Hg, enabling the surgeon to lift the lens to the pupillary plane.

Suction-based levitation with a sleeveless-extrusion cannula may be an alternative to the conventional method of removing dislocated IOLs from the vitreous cavity, according to a study.

The novel technique, performed in tandem with 23-gauge transconjunctival sutureless vitrectomy, requires no grasping of the dislocated IOL or contact with the retina, according to lead author Ashvin Agarwal, MD.

The technique involves standard 23-gauge three-port pars plana vitrectomy. After cutting the vitreous and removing the silicone oil, the surgeon places the cannula on the center of the IOL optic, sets the vacuum to 300 mm Hg and lifts the IOL to the pupillary plane. The IOL is grasped by end-opening forceps; the surgeon removes, repositions or exchanges the implant.

“Addressing the IOL with an extrusion cannula without sleeves gives a larger surface area to be adhered to the IOL,” Agarwal and colleagues wrote in the study, which was published in the British Journal of Ophthalmology.

The retrospective study included 10 eyes of 10 patients who underwent suction-based levitation of a dislocated IOL. The main outcome measures were reliability, reproducibility, and intraoperative and postoperative complications.

IOL levitation was performed within the first week of IOL dislocation in all cases.

IOL exchange was performed in four eyes, and the same IOL was repositioned in six eyes; of those six eyes, two underwent sulcus repositioning and four underwent glued intrascleral fixation.

Patients were examined postoperatively at 1, 3 and 7 days, weekly for the first month and monthly for 9 months. 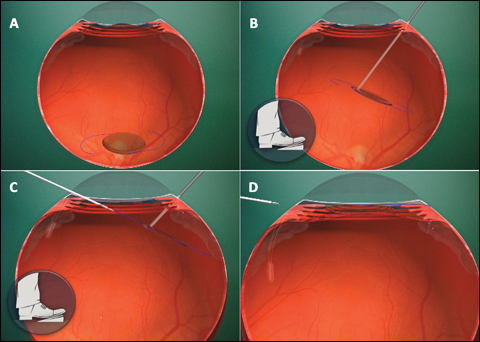 Figure. A dislocated IOL resting on the retina (a). A sleeveless-extrusion cannula lifts the silicone oil from the retina using traction after vitrectomy, so that no vitreous is present (b). Once the oil is brought to the anterior vitreous, one of the haptics is grasped with 23-gauge forceps (c). The IOL is maneuvered into the sulcus or glued in place, depending on the presence of a rhexis (d).

Intermediate and late complications included one case of macular edema that resolved with medical management.

No cases of postoperative vitreous or retinal hemorrhage, retinal break or retinal detachment were reported.

Agarwal noted that he had no complications in 30 to 40 recent procedures.

“If you cut the vitreous, there aren’t going to be any complications, whereas in the traditional technique, I used to struggle in terms of retinal edema. By touching vessels from the retina, you’re going to cause a bleed,” Agarwal said.

Agarwal said that the technique differs from traditional methods only in that vitrectomy is performed completely above the dislocated IOL.

Vitrectomy should be performed with extra caution in cases with double-loop lenses, Agarwal said.

“If you’re in a hurry to pull up, it may cause traction,” he said. “You only want to assure that there is no traction into the retina. That is the biggest difference for someone who is trying the technique for the first time.”

Agarwal also advised right-handed surgeons to hold the left side of the optic, not the right side or center.