Lens abnormalities are common and can present unilaterally or bilaterally.

Marfan syndrome is an autosomal dominant genetic disorder caused by the misfolding of the protein fibrillin-1. It is also a connective tissue disorder with varied expressions in the body with systemic and ocular involvement.

The major ocular finding of Marfan syndrome (MFS) is ectopia lentis, and approximately 60% of patients have lens dislocation, which is usually superior and temporal; this may be present at birth or develop during childhood or adolescence. At least two minor criteria must be present for consideration as ocular involvement: an abnormally flat cornea, increased axial length, or hypoplasia of the ciliary muscle or iris, causing decreased mydriasis. The diagnosis is based on a combination of typical symptoms, a family history of MFS and genetic testing, according to the Ghent criteria.

Lens abnormalities such as subluxation, dislocation, coloboma and ectopia lentis are usually seen. They may be unilateral or bilateral.

Lenticular abnormalities arise due to quantitative and qualitative abnormalities in the zonules, as demonstrated in some studies. Increased lenticular sphericity is seen due to decreased traction of zonules on the lens, leading to induced myopia apart from axial myopia.

Dislocation of the lens into the anterior chamber is often seen, and it demands great skill because the lens is entirely displaced and there are no zonules. Ectopia lentis occurs in 50% to 80% of patients and is a major criterion for diagnosis of MFS. Other secondary manifestations are early severe myopia, retinal detachment, early cataracts, glaucoma and amblyopia.

Coloboma may occur as an isolated defect or as a feature of a variety of single-gene disorders, chromosomal syndromes or malformation syndromes. Although not classically associated with MFS, colobomas have been described in several reports of MFS, typically involving the lens and rarely involving other ocular structures. A lens coloboma (Figures 1 and 2) is not a true coloboma; it is a zonular absence that causes a defect in the lens equator and hence a more spherical lens. 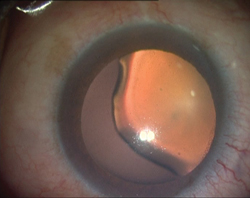 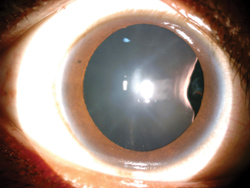 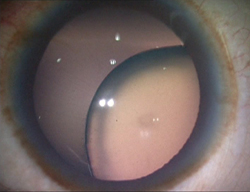 Figure 3. Severe subluxation of the lens.

Sectoral involvement of the zonules leads to subluxation of the lens that may vary in severity from mild to severe (Figure 3), depending on the involvement of clock hours. The stretched fibers of the zonules are often appreciated in the area of subluxation, and they appear as thin thread-like structures. In severe cases with 360° involvement, there may be apparent dislocation of the lens, which often dislocates into the anterior chamber and may wander into the posterior chamber, too.

These cases require adequate preoperative work-up in the form of posterior segment examination and calculation of the corrective IOL power because they may be associated with colobomas of the macula and optic disc. The IOL power calculation in such cases is often guided by the patient’s refraction and by measuring the distance to the patient’s preferred fixation. Patients often present with poor vision resulting from peripheral lenticular astigmatism and glare. IOL power calculation has to be precise because lenticular myopia and increased sphericity may lead to false calculation.

Management of these cases initially depends on the extent of ocular involvement. The cases are rarely resolved with optical refraction and often require surgery when visual acuity becomes uncorrectable or the refractive status is unstable. Weakening of the zonules is an inherent component of this syndrome, and clinical manifestation of ocular features depends on the extent of zonular involvement. 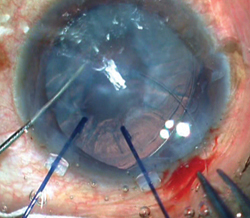 Figure 4. Capsular tension ring implanted into the bag to provide additional support to the bag.

During the process of phacoemulsification, many surgeons often employ iris hooks and capsular hooks to stabilize the bag. In cases of mild to moderate zonular involvement, the implantation of a capsular tension ring (CTR) provides intraoperative and postoperative stabilization of the capsular bag and IOL (Figure 4). In patients with more significant zonular compromise, the CTR alone may not provide enough support. In such cases, a modified CTR or a Cionni CTR can be used; this enables fixation to the sclera, and adequate stability can be achieved. The loss of significant zonular support greatly increases the surgical difficulty of cataract surgery with IOL implantation and jeopardizes the long-term results in these cases. In such cases, endocapsular segments can also be implanted in the bag, and adequate centration of the bag can be achieved. Moreover, when significant crystalline lens decentration is present, it may not be possible to achieve adequate recentration using a capsular tension device; therefore, the posterior chamber IOL will not center in the capsular bag.

The underlying cause of the lens subluxation and zonular weakness in MFS is not eliminated by implantation of a capsular tension device. Thus, further weakening of the zonules may occur in the long run and, in the most unfortunate cases, may cause luxation of the capsular bag into the vitreous body. Lensectomy with vitrectomy is our preferred mode of handling such cases followed by secondary IOL fixation with glued intrascleral fixation (Figure 5). 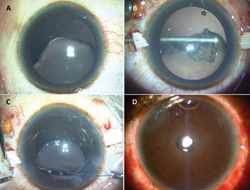 Figure 5. The procedure of glued IOL in a case of coloboma of the lens. Superior lens coloboma (a). Lensectomy with vitrectomy (b). Haptic externalization in process (c). First day postoperative with a small air bubble seen in the anterior chamber (d).

Two partial-thickness scleral flaps 2.5 mm by 2.5 mm are fashioned 180° opposite each other. Infusion is introduced into the eye, and sclerotomy is done beneath the flaps with a 20-gauge needle about 1.5 mm away from the limbus. A 23-gauge vitrectomy probe is introduced from the sclerotomy site, and lensectomy with vitrectomy is done followed by creation of a corneal tunnel. A three-piece foldable IOL is loaded onto the cartridge, and the haptics are externalized with the help of glued IOL forceps. A 26-gauge needle is used to create a scleral pocket, and the haptics are tucked into it. Infusion is stopped, an air bubble is injected into the anterior chamber, and fibrin glue is applied beneath the scleral flaps.

With virtually no pseudophakodonesis seen in glued IOL fixation, it serves as an excellent method for IOL fixation because the patients are often young when operated. As per studies, a pars plana approach for lensectomy in MFS cases should be handled with caution because the risk for iatrogenic retinal breaks just posterior to the site of insertion of the vitrectomy probe may be a matter of concern because these eyes are more prone to develop retinal detachment. The advantage with glued IOL surgery is that lensectomy is done from the sclerotomy incision, which is about 1.5 mm from the limbus and far away from the area of the pars plana, thereby minimizing the chances of damaging the vitreous base and peripheral retina.

Disclosure: No products or companies that would require financial disclosure are mentioned in this article.