The contact lens helps corneal stromal thickness reach at least 400 µm, at which point cross-linking can be safely performed.

Collagen fibers in the human body are normally bonded together and stabilized by covalent cross-links. The tensile strength of mature collagen fibers is largely due to intermolecular covalent cross-links. Collagen cross-linking was described by Theo Seiler et al as a means to strengthen a weak and ectatic cornea. This works by utilizing ultraviolet A at a wavelength of 370 nm in the presence of the photosensitizer riboflavin to create an increased number of covalent bonds among corneal stromal collagen fibers.

Riboflavin is a photosensitizer and causes damage at a lower UVA irradiance level of 0.36 mW/cm2. The creation of oxygen free radicals leads to induction of collagen cross-links, which in turn leads to more compact interlamellar connections. Riboflavin also has an additional protective role by increasing the absorption coefficient, thereby decreasing final irradiance at the endothelial level down to 0.18 mW/cm2. However, 400 µm of riboflavin-saturated stroma above the endothelium is considered safe to avoid adverse effects. In patients with corneas thinner than this, conventional cross-linking cannot be performed. For patients with corneal stromal thickness between 350 µm to 400 µm after epithelial removal, we have performed a new technique called contact lens-assisted cross-linking (CACXL). This was described by Soosan Jacob.

Preoperatively, lidocaine 2% and pilocarpine 2% are instilled to aid in epithelial removal and to promote miosis and reduce UVA exposure to the lens and retina. The central 9 mm of corneal epithelium is abraded. Iso-osmolar riboflavin 0.1% in dextran T500 is applied every 3 minutes for 30 minutes. At the same time, a SofLens daily disposable soft contact lens (Bausch + Lomb) made of hilafilcon without UV filter and of negligible power is immersed in isotonic riboflavin for 30 minutes. At the end of 30 minutes, adequate corneal saturation with riboflavin is confirmed by visualization of a green flare in the anterior chamber using a slit lamp. The riboflavin-soaked contact lens is then applied on the corneal surface, and thickness is measured again. Once confirmed to be more than 400 µm, treatment is continued.

The central 9 mm of the cornea is exposed to UVA light of 370 nm with an irradiance of 3 mW/cm2 for 30 minutes. During CACXL, riboflavin solution is generally reapplied once in 3 minutes. Any buckling of the contact lens is handled by reapplying sufficient riboflavin solution under and above the contact lens when required, allowing it to spread uniformly and encouraging the patient not to move his eyes or squeeze his lids. Riboflavin applied over the contact lens fills any persistent troughs on the contact lens surface and also gives a uniform layer over the lens (corresponding to standard CXL requirements). At the end of surgery, the eye is washed and a fresh bandage contact lens is applied until corneal epithelial healing takes place. Postoperatively, antibiotic drops are given until epithelial healing occurs followed by fluorometholone-tobramycin eye drops once epithelial healing is complete. The patient is also advised to wear UV-protective glasses (Figures 1 to 3). 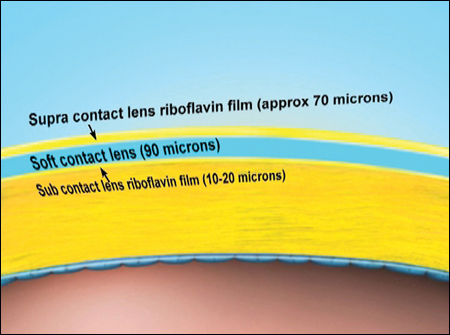 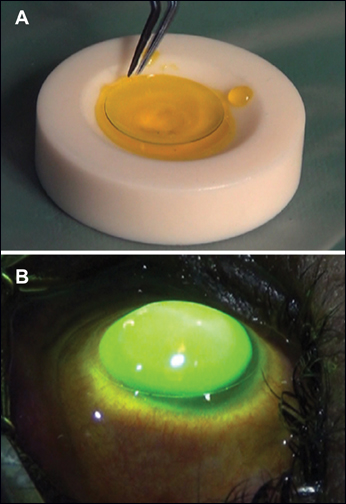 Figure 2. The soft contact lens soaked in riboflavin is seen (a). The cornea is exposed to 370 nm of UVA light for standard or accelerated protocol (b). 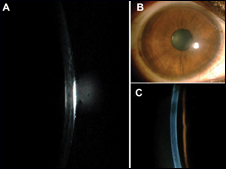 Using the CACXL technique, an average additional thickness of about 90 µm to 110 µm is obtained. It is important for this technique to use a contact lens that does not have a built-in UV barrier. This can be checked simply with a digital UV meter by placing the contact lens under the UV beam of the UV light source. Contact lenses that block or decrease UV irradiance should not be used.

CACXL allows patients with corneas thinner than 400 µm (after epithelial removal) to receive cross-linking. Because it is not dependent on the swelling properties of the cornea, CACXL makes cross-linking possible in a larger group of patients. For patients whose thickness does not increase to more than 400 µm, it might be possible to combine CACXL with a limited amount of hypotonic swelling. However, in very thin or very steep corneas, it is preferable to perform a deep anterior lamellar keratoplasty rather than cross-linking because stiffening of too thin a cornea may not be sufficient to prevent progression.

We have also performed accelerated CACXL using 10 mW/cm2 power for 9 minutes to give a total energy level of 5.4 J/cm2. This has the added advantage of decreasing intraoperative dehydration that occurs during prolonged use of dextran-containing solution. Intraoperative deturgescence can also be decreased by using 0.1% riboflavin in a mixture of hydroxypropyl methylcellulose and saline (VibeX Rapid, Avedro) instead of riboflavin in dextran. These two techniques become especially important in such thin corneas.

It is of vital importance to maintain a safe limit of 400 µm of riboflavin-containing medium (stroma plus contact lens) above the endothelium for safe cross-linking. Therefore, at the beginning of surgery, the thinnest point on the cornea should be marked and ultrasonic pachymetric measurements should be taken after epithelial debridement, after riboflavin soaking, and before and during UV application, making certain at all times that the 400-µm safe limit is maintained. A pre-contact lens riboflavin film is also maintained in front of the contact lens, which corresponds to the pre-corneal riboflavin film in standard cross-linking. Studies with standard cross-linking have shown that the mean UV irradiance at 400 µm of stroma is 0.68 mW/cm2 (above the toxic level of 0.36 mW/cm2 to the endothelium) without this film and 0.21 mW/cm2 with this film.

Because UV attenuation begins at the level of the contact lens, CACXL decreases the effective dose of UV that is incident at the level of the corneal stroma; however, our early studies have shown encouraging results for cross-linking these thin corneas (Figure 3). To conclude, in cross-linking, despite a reduction of irradiance from the corneal surface toward the deeper layers of corneal stroma, irradiation levels still exceed endothelial toxic threshold in thin corneas. CACXL adds artificially to functional corneal thickness using a UV barrier-free riboflavin-soaked contact lens of known thickness and thereby increases safety. It therefore extends the benefit of safely undergoing cross-linking to a larger number of patients with thin corneas, with a greater chance of successfully and safely completing the procedure. However, precautions should be taken to maintain a combined corneal thickness above 400 µm at all times.