A 64-year-old male patient was referred for evaluation of a possible vitreous hemorrhage in his right eye. He reported that 5 days before presentation he was having severe diarrhea with fevers and chills. His maximum temperature was 102°F. Two days after this illness began, he began to have new floaters in his right eye that progressively worsened to the point of severely decreased vision, accompanied by a mild eye ache. That same day he also began to have pain and swelling in his left wrist, for which he was wearing a wrist brace.

He denied risk factors for sexually transmitted infections and denied any history of drug use. His review of systems was otherwise negative except for a recent rash on his right buttock that his wife thought “looked like shingles.”

The patient’s uncorrected visual acuity was hand motions in the right eye and 20/25+ in the left. Pupils were equal, round and reactive to light without evidence of afferent pupillary defect. Ocular motility was full. IOPs were 10 mm Hg and 13 mm Hg, respectively. Slit lamp examination demonstrated a mildly injected right eye with mild corneal edema, dusting of the corneal endothelium with no keratic precipitates and a hypopyon measuring 3 mm (Figure 1). There was also a fibrinous membrane attached to the anterior capsule and 1 to 2+ nuclear sclerotic cataract. Slit lamp examination of the left eye was unremarkable except for 1 to 2+ nuclear sclerotic cataract. Dilated examination of the right eye showed poor visualization of the posterior pole and peripheral retina secondary to dense vitritis; there was no evidence of retinitis. Dilated examination of the left eye showed mild nonproliferative diabetic retinopathy and a clear vitreous (Figure 2). 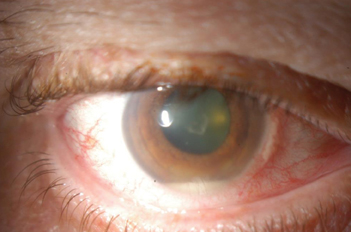 Figure 2. Fundus photos of the right eye (left) and left eye (right), showing poor view in the right eye from vitritis and mild nonproliferative diabetic retinopathy in the left eye.

The differential diagnosis of nongranulomatous panuveitis in a 64-year-old man includes infectious, inflammatory and neoplastic conditions.

Given his recent high fever and acutely inflamed left wrist, as well as his presumed relative immunodeficiency due to diabetes mellitus and use of budesonide (a corticosteroid), infectious etiologies were highest on our differential. Endogenous endophthalmitis was of particular concern due to the patient’s recent fevers and chills, as well as the presence of hypopyon and vitritis. Other infectious etiologies included acute retinal necrosis, syphilis, tuberculosis, toxoplasmosis and Lyme disease. The lack of any retinitis and the presence of a hypopyon, as well as the nongranulomatous nature of the inflammation, made these conditions less likely. Inflammatory causes considered were an extraintestinal manifestation of the patient’s Crohn’s disease, Behçet’s disease and sarcoidosis. The amount of inflammation, especially in the vitreous, made HLA-B27-related uveitis less likely. The lack of evidence of vasculitis and the nongranulomatous appearance of the inflammation, respectively, made Behçet’s and sarcoidosis unlikely. Ocular lymphoma was also considered as a masquerade syndrome of panuveitis.

A tap of the vitreous was dry and was followed by a successful tap of the anterior chamber. Vancomycin and ceftazidime were injected into the vitreous cavity. The aqueous sample was sent for gram stain, culture and polymerase chain reactions (PCRs) for HSV-1, HSV-2, VZV and toxoplasmosis. The patient was admitted to the infectious disease service for intravenous broad-spectrum antibiotics and a work-up for underlying causes. He was also started on oral valacyclovir and topical Polytrim (polymyxin B sulfate and trimethoprim ophthalmic solution, Allergan), prednisolone acetate and atropine in the right eye.

Blood and urine cultures were drawn. CBC showed leukocytosis of 12.6 K/µL with a left shift. RPR and FTA-ABS were non-reactive. Quanti-FERON gold testing was indeterminate, and chest X-ray was normal. Lyme antibody testing was normal. Erythrocyte sedimentation rate and C-reactive protein were markedly elevated at 120 mm/hr and 105 mg/L, respectively. Angiotensin-converting enzyme level and lysozyme level were normal, and HLA-B27 testing was negative.

The patient had a CT of his abdomen, which was unremarkable. Given his Crohn’s disease, a colonoscopy was performed but did not show any active inflammation from Crohn’s. Concurrent transesophageal echocardiogram (TEE) showed no cardiac valvular pathology. He underwent a tap of his left wrist, which revealed copious purulent material, and a subsequent surgery for washout was performed.

Endogenous endophthalmitis is an intraocular infection in which the pathogens reach the eye through the blood stream. Most cases are fungal in origin in which the fungemia is associated with a known risk factor such as intravenous drug use, the presence of indwelling central venous catheters or the use of total parenteral nutrition. Endogenous bacterial endophthalmitis accounts for only 2% to 6% of cases of endophthalmitis. In 90% of cases it is associated with an underlying medical condition such as diabetes mellitus, heart disease or malignancy.

There is commonly an extraocular focus of infection identified at the time of presentation, the most common of which are in the liver, lung, endocardium or heart valves, and soft tissues. In Southeast Asia, there is a strong association with liver abscesses, especially those caused by Klebsiella species. This association is less common in North America. Gram-negative bacteria were isolated in 56% of cases of endogenous bacterial endophthalmitis, while gram-positive bacteria accounted for 40% in the largest review of the literature published. Streptococcus species cause the majority of gram-positive cases, although Staphylococcus aureus is also a relatively common cause. In one large microbiologic study, the sensitivities of 448 isolates from both endogenous and exogenous endophthalmitis cases were tested. All of the gram-positive isolates in this study were susceptible to vancomycin and all of the gram-negative cases to ceftazidime. These two medications are the most commonly used injectables for cases of presumed bacterial endophthalmitis at the New England Eye Center. 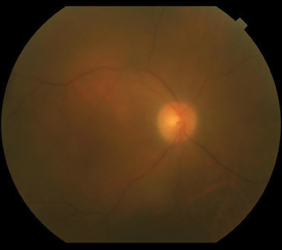 The prognosis of endogenous bacterial endophthalmitis is poor, with only 32% achieving a final visual acuity of counting fingers or better. Twenty-five percent of cases result in enucleation or evisceration, and there is a 5% mortality rate from extraocular manifestations. Few conditions treated by ophthalmologists have a mortality rate this high, so early diagnosis and treatment are important. A worse prognosis has been associated with a delay in diagnosis, more virulent organisms, gram-negative pathogens, diffuse involvement of the retina and choroid, and worse visual acuity at presentation.

Our patient’s vitritis began slowly clearing over the course of his hospital stay, resulting in better visualization of his posterior pole and visual acuity to the level of counting fingers at 7 feet by 10 days after presentation. His hospital course was complicated by a non-ST-elevation myocardial infarction and ileus after the combined colonoscopy/TEE. He also had to undergo three wrist surgeries for incision and drainage of persistent purulent discharge. He was discharged to a rehabilitation facility to complete a 6-week course of antibiotics. Four weeks after initial presentation, visual acuity in the right eye had improved to 20/50, with resolution of anterior chamber inflammation and minimal vitritis (Figure 3).