Is femto phaco a case of the ‘emperor’s new clothes?’

It has been a few years since femtosecond lasers were first approved for use in cataract surgery, but many questions still remain. Is femto phaco safer than manual phaco? Is a femtosecond laser-created capsular opening better than a manual capsulorrhexis? Are the refractive results more precise? And for patients, what is best, and is it worth it to invest in this expensive technology? While there are many proponents of femto phaco, there are also those who question if this is a case of the “emperor’s new clothes.”

It should be noted that these individual serrations were just 2 µm wide and required 10,000× magnification to be seen. Also, as lower energy levels were used to create the capsular opening with the femtosecond laser, these serrations became smaller.

The ability to create a perfectly round capsular opening of a specific diameter has been shown to be better and more consistent with the femtosecond laser. But if the manual capsulorrhexis overlaps the IOL optic for a full 360°, just like the perfectly round femtosecond laser capsulotomy, is there a difference in refractive accuracy by virtue of creating a more predictable effective lens position? (Figure) 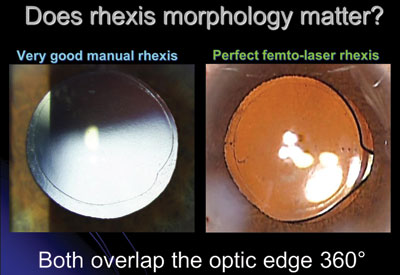 If the anterior capsular opening overlaps the optic of the IOL for a full 360°, the IOL is held firmly in position, whether it is a pretty good manual capsulorrhexis or a perfectly round capsulotomy created with the femtosecond laser.

Despite the many studies that have been performed and published, the results have been mixed with no consistent benefit in regards to refractive predictability. In my limited experience with my own patients, I have not seen a clinical difference in the postop spherical equivalent refraction, which is influenced by the effective lens position of the IOL, in femto eyes vs. manual rhexis eyes.

However, the astigmatic corneal incisions made with the femtosecond laser are certainly more accurate than what can be achieved by hand due to a combination of the tissue imaging and laser’s precision. The imaging modality allows the astigmatic incision to be tailored to the specific depth of the patient’s cornea and to be consistently made at the desired depth with the ability to titrate the effect by further opening these incisions at a later date.

Multiple studies have shown that using the femtosecond laser to divide or soften the cataract nucleus before phaco can reduce ultrasonic energy placed in the eye. This, in turn, can reduce the corneal endothelial cell loss induced by the cataract surgery. This makes sense because other studies have previously established that using a phaco chopper to disassemble the nucleus results in a similar reduction of ultrasonic energy as compared with the divide-and-conquer technique. This benefit of the femtosecond laser is a relatively small step compared with what we achieved with phaco power modulations years ago. If your current patients routinely have clear corneas the day after surgery, is there a tangible benefit of further reduction in ultrasound to the near zero level that has been reported?

As someone who teaches hundreds of resident cataract cases per year, I know that a femtosecond laser would decrease the complication rate for my beginning surgeons. But there is a delicate balance because while I want my resident surgeons to have the experience of trying the laser, I do not want it to come at the expense of not developing their manual skills. Also, like any other new technology, studies have shown that there is a learning curve to incorporating the femtosecond laser in cataract surgery and that complications are more likely to occur in the initial period.

For a less experienced or less comfortable surgeon, the femtosecond laser can be a huge help: It will make the anterior capsulotomy and divide the nucleus consistently in nearly every case. There would be no need to master the manual capsulorrhexis or learn to use the phaco chopper. But what would these surgeons do when the patient presents with a small pupil or an opaque cataract that prevents the laser energy from penetrating the tissues?

For a more experienced surgeon, the additional steps of the femtosecond laser may just make the surgery slower and less efficient. These experienced surgeons can already make a consistently good manual capsulorrhexis and divide the nucleus in an efficient manner. For these skilled surgeons, the potential benefits of femto phaco are more limited, and the cost and efficiency issues may not make it as worthwhile.

I have certainly found utility in using the femtosecond laser for unusual cases such as intumescent white cataracts, to avoid the Argentinian flag sign, and eyes with zonular laxity, in which a manual capsulorrhexis is challenging due to lack of capsular tension. In another case, the imaging of the femtosecond laser was able to alert me to the presence of a posterior polar defect in an eye with a brunescent cataract that prevented me from seeing this lesion at the slit lamp microscope before surgery. What about routine cases?

For routine cases, the benefits of femto phaco are less pronounced in my hands. While I have learned to use the laser to position and create a great corneal incision, I still prefer the seemingly cleaner results of a diamond keratome. I have also enjoyed using the laser to divide the cataract, but at this point, I prefer to disassemble a nucleus with my chopper instead. For the majority of my cases, I am very satisfied with my ability to make a round, well-centered, appropriately sized capsulorrhexis using forceps. The femtosecond laser is better at making corneal arcuate incisions than me using a manual technique with a diamond blade, but I still prefer a toric IOL instead of a relaxing incision for 1.5 D or more of corneal astigmatism. Should my patients desire laser-assisted cataract surgery or if I can see a clear benefit to using it, I am happy to perform it.

The future of femto phaco

Keep in mind that we are in the early stages of femtosecond laser technology in cataract surgery. With every new generation, the platforms will get better and better. With our current femtosecond lasers, we have seen improvements in patient interfaces and software in just the past year. Even in my limited experience, I have noticed an improvement in femto phaco during the past 2 years, particularly when it comes to free-floating capsulotomies and the ease of cortex removal, which has been improved as energy levels have decreased. As the lasers become faster, the energy level and spot sizes will become smaller, giving less of a serrated edge to the capsulotomy and making the procedure faster and more efficient. Look at the phaco machine platforms of yesteryear and compare with the new ones that are available now, and you will agree that the progress that has been made is nothing short of remarkable. The same evolution and progression will apply to these lasers.

Every subsequent generation of femtosecond laser will continue to advance the field and likely produce incrementally better results for our patients. However, the true benefit of femto phaco may come in the future when we have revolutionary IOL designs that will require an unusual capsular configuration that we will not simply be able to tear with forceps. Think about a toric IOL design with pegs at the haptic-optic junction that could be pushed through small, peripheral, precisely placed, laser-made capsular openings to ensure stability and prevent rotation. There could be complete nucleus softening and aspiration of the cataract through a small, eccentric capsular opening, with the new IOL being an injectable polymer placed directly into the capsular bag, which would then be sealed. Or perhaps there will be an accommodating IOL that would require a very specific capsular opening to secure the optics.

I believe that the femtosecond laser is here to stay and that it is certainly not a case of the emperor’s new clothes. There are some tangible benefits now, which may be more in certain types of patients or in certain levels of surgeons, and many surgeons, like me, will continue to be cautious and ask questions. Approaching new technology with an open mind but also a healthy dose of skepticism tends to be in the best interests of surgeons as well as patients.