Surgeons explain why the technique has several advantages for scleral fixation.

Stabilization of the decentered or subluxed IOL-capsular bag complex or implantation of a secondary posterior chamber IOL lacking capsular support can be accomplished by means of iris fixation and transscleral fixation through the ciliary sulcus or pars plana. Although iris fixation of decentered IOLs is a popular technique for lens stabilization, late onset of IOL-capsular bag complex subluxation resulting from zonular weakness or dialysis may be more easily repaired with scleral fixation.

Techniques for transscleral fixation include ab interno methods, in which the suture is passed from the inside of the eye to the external surface, and ab externo methods, in which the suture is initially passed from the external surface. Common to all of the techniques for transscleral fixation is the need to bury, cover or rotate the knot created for fixation so that conjunctival erosion and subsequent endophthalmitis are less likely to develop.

Scleral fixation of IOLs and adjunctive capsular devices can be performed under the protection of a scleral flap. In 2006, Hoffmann described a technique that allowed for suture knot coverage and avoided the need for conjunctival dissection, scleral cauterization or sutured wound closure. With this technique, a scleral pocket is initiated through a peripheral clear corneal incision. This is followed by full-thickness passage of a double-armed suture through the scleral pocket and conjunctiva with subsequent retrieval of the suture ends through the external corneal incision for tying.

My guests in this column are Richard S. Hoffman, MD, and his colleagues.

The corneoscleral pocket technique offers a refined method for fixation of IOLs and other intraocular adjunctive devices. We will describe the technique for a late subluxed IOL-capsular complex, secondary implantation of a foldable IOL without capsular support and iridodialysis repair, but it can be employed for any IOL or intraocular device that requires transscleral fixation.

There are several advantages of the scleral pocket technique for scleral fixation. First, a larger surface area can be created for suture passes than with triangular scleral flaps or scleral grooves. This allows the suture needles to exit anywhere inside the large dissected pocket as long as they are at the appropriate distance from the surgical limbus (0.5 mm to 1 mm for ciliary sulcus fixation). This is especially useful when utilizing an ab interno approach.

Second, dissection of the scleral pocket initiated from a clear corneal incision avoids the need for conjunctival dissection or scleral cautery. This should induce less discomfort in patients undergoing procedures with topical anesthesia in which unforeseen complications may necessitate use of scleral-fixated lenses or fixated capsular bag prostheses. The dissection of the distal scleral pocket is also easier to perform than a triangular flap in the distal location because the dissection can proceed directed away from the surgeon in a slightly “downhill” direction. In addition, the procedure may be expedited relative to a triangular flap technique because conjunctival dissection is avoided and sutured wound close is unnecessary.

Finally, less astigmatism may be induced than would occur with the placement of two radial sutures through each of two opposing triangular flaps in the same meridian. Although two opposed 30° vertical clear corneal incisions have a small flattening effect in the meridian of placement, the small arc length and relatively superficial depth compared with traditional limbal relaxing incisions induce very little astigmatic effect, and this can be modified by using more superficial 300-µm incisions, depending on the desired astigmatic result.

Calipers dipped in gentian violet are used to mark the locations for the peripheral clear corneal incisions. These incisions are made 180° from each other in a meridian that will facilitate proper final positioning of the IOL optic. The haptics should be incorporated into the suture passes unless a capsular tension ring was previously placed, in which case the capsular tension ring can be secured within the suture passes. The 3 and 9 o’clock meridians should be avoided to prevent damage to the long posterior ciliary arteries. A guarded diamond step knife (#05-5027, Rhein Medical) or #64 Beaver blade (#376400, BD) is used to make the 30° long (1 clock hour) and 300- to 400-µm-deep incisions just anterior to the conjunctival insertion at the limbus (Figure 1). The depth of these incisions can be modified depending on whether more or less flattening is desired in that meridian. 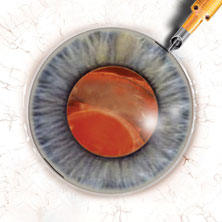 Figure 1. Subluxed IOL-capsular bag complex containing Soemmering’s ring. Two 30° long (1 clock hour) and 300- to 400-µm-deep clear corneal incisions are made with a diamond step knife 180° apart. These incisions are placed in a meridian that will allow fixation of the lens haptics to the sclera. 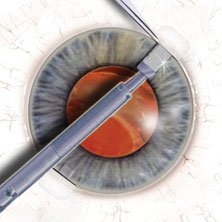 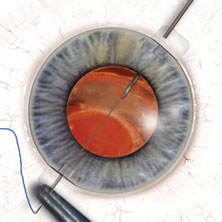 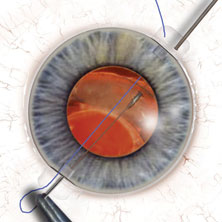 Figure 4. Second arm of the double-armed Prolene is inserted through the paracentesis and docked with a second 27-gauge needle that has perforated the capsular bag central to the exposed haptic. 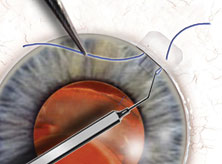 Figure 5. After the second pass of the double-armed suture, the needles are removed and the suture ends are retrieved through the scleral pocket incision utilizing a Sinskey hook. Note: The left suture has already been retrieved and is being held with forceps to avoid inadvertent suture loss during retrieval of the right suture. 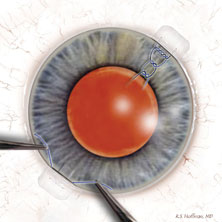 Figure 6. Prolene sutures for each haptic are tied, allowing the knot to slide under the roof of the scleral pocket.

A small quantity of viscoelastic is placed into the anterior chamber through one paracentesis to stabilize the anterior chamber. Viscoelastic may also be placed in the ciliary sulcus underlying the scleral pocket to aid the suture passes. Suture placement is initially directed toward the haptic that has been exposed through the pupil secondary to the IOL decentration.

The same technique can be performed on the opposite haptic utilizing the second scleral pocket and the opposing paracentesis (Figure 6). An iris hook can be placed in the first paracentesis to aid in visualization of the capsular bag equator and lens haptic for the second fixation site. Suturing of the scleral pockets is not necessary. Viscoelastic can be removed by injecting Miochol-E (acetylcholine chloride, Bausch + Lomb) into the anterior chamber while depressing the posterior lip of one of the paracenteses or with bimanual irrigation and aspiration cannulas inserted into each of the two paracenteses.