Only 10% of eyes needed additional glaucoma surgery after revision for late-onset bleb leaks.

The overall success rate of surgical bleb revision for late-onset bleb leaks after trabeculectomy was high, according to a study.

“Bleb revisions are not performed frequently,” first author Albert P. Lin, MD, a staff physician at Michael E. DeBakey Veterans Affairs Medical Center in Houston, told Ocular Surgery News. “We wanted to review the cases performed by all the surgeons at our institution to determine the clinical outcome of our intervention. Our goal was to arrive at a rate of success to help us counsel our patients and also to share our results with our colleagues.”

A database search for revision and repair of operative wound of the anterior segment between July 2001 and December 2009 was conducted at Michael E. DeBakey Veterans Affairs Medical Center and Baylor College of Medicine, where Lin is an assistant professor of ophthalmology.

The study was published in the Journal of Glaucoma.

Of the 78 eyes included in the study, 72 had open-angle glaucoma, three had inflammatory glaucoma and three had angle-recession glaucoma. Average patient age was 65.5 years; 56 patients were men and 19 were women.

The average time between documentation of bleb leak and bleb revision was 26.3 days, and patients had an average of 27.3 months of follow-up after bleb revision.

Lin and colleagues were surprised that only 10% of the eyes required follow-up glaucoma surgery for pressure control after bleb revision.

“Our impression was that this rate would be much higher,” Lin said. “About two-thirds of the patients maintained mid-teens or lower IOP with or without medications after bleb revision. The majority of patients were able to control their IOP with adjunct medications.”

However, 9% of the eyes developed late bleb leaks, despite having had bleb revisions.

“Bleb leaks can sometimes be difficult to repair,” Lin said. “Patients with functional ischemic blebs are at risk for developing bleb leaks.”

In cases of hypotony, vision improved after bleb revision. “On average, vision was stable during the follow-up period,” he said.

The authors found a low risk of bleb-related infection after bleb revision. Of the three eyes that became infected, two were treated medically and one developed fungal endophthalmitis without an identifiable bleb leak, which necessitated a vitrectomy and resulted in hand motion vision at final follow-up.

It is not an easy task to decrease the likelihood of late-onset bleb leaks after trabeculectomy, according to Lin, because “all functioning ischemic blebs are at risk for developing late-onset bleb leaks. If a patient seems to rub his or her eyes excessively or has poor lid hygiene, then perhaps another type of glaucoma surgery should be selected instead of trabeculectomy.” 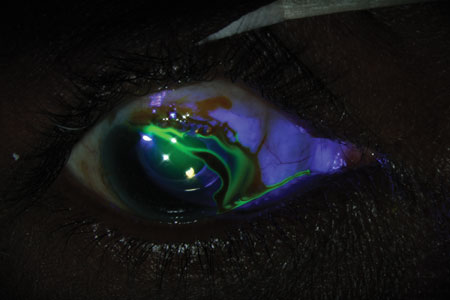 The first step to successfully treat late-onset bleb leaks is to identify the leak, Lin said.

“Patients may tell you they feel a gush of tears come out from time to time,” he said. “Vision may also decrease, the  anterior chamber might be shallow, and the bleb may be flat.”

Lin suggested using a Seidel strip to carefully check the bleb for leak and identify if an infection is present.

“Treat the patients medically, but promptly consider bleb revision as needed,” he said. “Bleb revision is not an easy surgery to perform. Still, watertight closure can be achieved with adequate tissue coverage, mattress suturing technique and the use of vascular needles. But if one is not experienced in bleb repair, referral to a glaucoma specialist will allow for the best outcome.”

Lin said that conjunctival tissue should be preserved as much as possible in case additional glaucoma surgery is indicated. – by Bob Kronemyer

Lin and colleagues report a retrospective analysis of a large series of eyes in which they performed bleb revision for a leaking trabeculectomy bleb. The reader should conclude that bleb leaks can be repaired, but sometimes additional procedures are necessary. Furthermore, the IOP may often be undesirably high after the revision, necessitating reinstitution of medications or even further glaucoma surgery. Because no one disputes the fact that bleb leaks must be stopped, the effect of this study and its predecessors on clinical practice is not to change management, but to provide for better counseling of the patient regarding the likely effect upon IOP, need for medications and need for further glaucoma surgery.