None of the patients studied experienced symptoms as typically portrayed on websites.

Photographs on the Internet depicting visual field loss as experienced by glaucoma patients do not offer an accurate portrayal, a researcher said.

“Patients are often misled by images shown on the Web that are meant to depict the visual symptoms of the disease. What they see ubiquitously is black tunnels and black patch effects,” David Crabb, PhD, said at the European Glaucoma Society meeting in Copenhagen.

The study, conducted at the City University and Moorfields Eye Hospital of London, investigated patients’ perceptions of glaucoma-related visual field (VF) defects. The manner in which VF defects are perceived is more complex than how they are depicted on the Internet, according to Crabb. Compensatory mechanisms can prevent patients from becoming aware of visual symptoms until the late stages of the disease.

“When they compare the black tunnel images with the way they see, they might become convinced that they do not have glaucoma and do not need to take medications,” Crabb said. “To raise awareness about symptoms or lack of symptoms, we need to depict visual symptoms better.”

The aim of the study was to explore patient perception of VF defects, testing the hypothesis that patients do not experience impairment as a tunnel effect or black patches in their field of view. 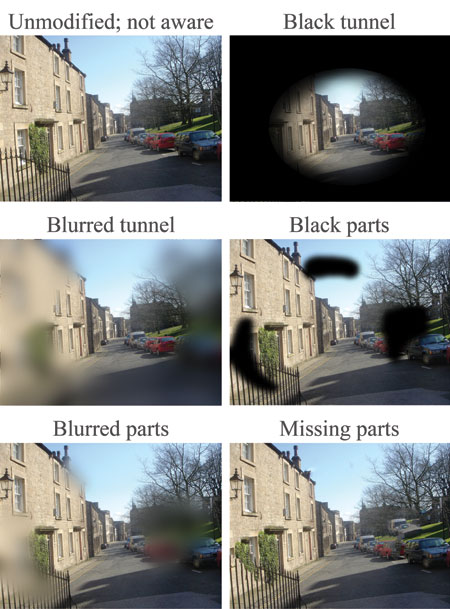 A single image is modified by a black tunnel effect, a blurred tunnel, black patches, blurred parts and a more subtle effect of missing parts filled in by the background.

Fifty patients with VF defects in both eyes were recruited at Moorfields Eye Hospital. VF defects varied widely, with a mean deviation of –7.3 dB in the better eye. Visual acuity was 20/30 or better, and average patient age was 70 years.

In the second part of the study, patients were shown six images on a computer monitor that depicted visual symptoms of the disease and were asked which one best described their visual experience.

“The same view was modified by a black tunnel effect, a blurred tunnel, black patches, blurred parts and, finally, a more subtle effect of missing parts filled by the background,” Crabb said. “The striking result was that none of the patients perceived the black tunnel or black patches.”

One out of four patients said they had no visual symptoms whatsoever, although all of them had VF defects in both eyes. The majority of patients described their visual symptoms as blurred or missing parts.

There appeared to be no clear relationship between severity of symptoms and which image patients selected as representative of their experience. The two patients who chose tunnel vision had no worse VF defect than the others. No correlation was observed between integrated VF, the binocular representation of the two monocular results, and perimetric patterns and specific visual symptoms, Crabb said.

The interviews were used to ascertain the words that patients used to describe their visual experience.

“The most frequently used words were ‘blur,’ ‘missing,’ ‘fuzzy,’ ‘disappeared,’ but there was no emphasis on tunnel vision or black areas in the field of view. A very elegant way one patient found to describe their experience was ‘looking outside a window through condensation,’” Crabb said.

The words that patients used most frequently in describing how VF defects impacted daily life for them were “driving,” “reading,” “risk of falling” and “mobility.” Difficulty in using the computer and walking around the home, particularly in the kitchen, was also expressed often.

One patient said: “When I am reading, it looks like someone had poured bleach on the page. … The words have been wiped away.”

Another patient said: “I saw a bus coming. I thought it was a single-decker, and it turned out to be a double-decker.”

“This work is important in the context of raising awareness for glaucoma detection and case finding and can be used to generate images more representative of what patients may or may not see when their visual field defect reaches the point where they have symptoms,” Crabb said. – by Michela Cimberle