A surgeon recounts surprises that occurred during IOL implantation and explains his course of action.

The lens capsule is the housing unit and final resting position of the IOL in routine, uneventful cataract surgery. Any significant compromise of this housing unit poses a challenging situation for the operating surgeon and the operating room staff. When there is a capsular tear with vitreous prolapse, the surgeon has to convert this unwelcome situation to a more acceptable scene by clearing the vitreous and often placing a three-piece IOL in the ciliary sulcus. In this scenario, the surgeon has time to deal with the vitreous and capsule, without the IOL in the eye. The surgeon simply has to do a good vitreous cleanup and then insert the IOL in a controlled and safe manner.

Let us now look at a second scenario. The capsule is intact following completion of nuclear and cortical cleanup, and the surgeon is moving smoothly toward IOL placement in an intact capsular bag and wound closure. When a capsular tear occurs during the unfolding of the IOL within the eye, the surgeon is not prepared for this event and has a limited window of time before the IOL can take the path of least resistance through the capsular rent into the vitreous and toward the posterior pole. The surgeon needs to quickly reverse this potentially damaging path by holding the sinking IOL and safely explanting it, performing vitrectomy if needed and then placing the appropriate IOL in the ciliary sulcus. This can be challenging, but a fast corrective response from the operating surgeon can contribute to an overall good outcome with optimal vision postoperatively.

In this column, Devgan describes the sinking of an IOL following insertion into an otherwise intact capsular bag and his technique of managing such an unexpected intraoperative capsular tear. He also provides some surgical pearls for all cataract surgeons.

A retina specialist referred a patient with macular degeneration because there was a blurred retinal view secondary to a moderately dense cataract. Initial exam seemed normal (good biometry, good dilation) except for the cataract. We selected a single-piece monofocal lens implant with a goal of plano. The patient was nervous because this was her better-seeing eye, and she relied on it for her daily activities. I wanted to perform an elegant and uneventful surgery to make the patient and the referring retina specialist happy.

Under topical and intracameral anesthesia, diamond blades were used to create a 0.8-mm paracentesis incision and a 2.8-mm temporal phaco incision. A 5-mm round capsulorrhexis that was centered on the visual axis was created. The nucleus was removed using phacoemulsification, and then the cortex was removed using coaxial irrigation and aspiration. A small amount of subincisional cortex remained and was to be removed after IOL insertion. By inserting the IOL first, there would be protection of the posterior capsule while this last remaining cortex fragment was aspirated.

The IOL power was confirmed, and the IOL was loaded into the injector. It was placed directly into the capsular bag, at which time it began unfolding. The chopper was used to center the lens, and I watched as the haptics unfolded into position (Figure 1). But something was not right. The IOL began to descend too far posteriorly toward the retina (Figure 2). This should not be happening; the posterior capsule should be securely holding the lens in place. But it was not, and I had to think fast. 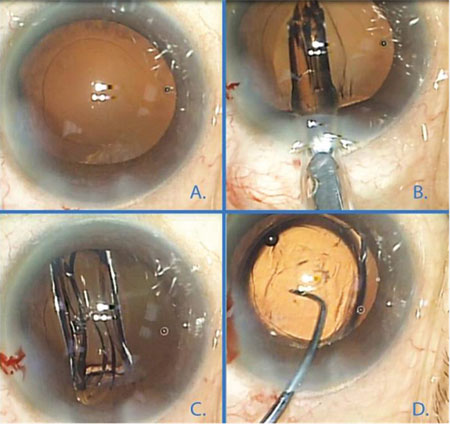 Figure 1. The capsulorrhexis looks good, and the capsular bag is empty except for a small fragment of subincisional cortex that will be removed after the IOL is inserted (a). The single-piece acrylic IOL is placed into the anterior chamber (b) and then guided into the capsular bag (c). The chopper is used to center the optic as the haptics unfold (d). 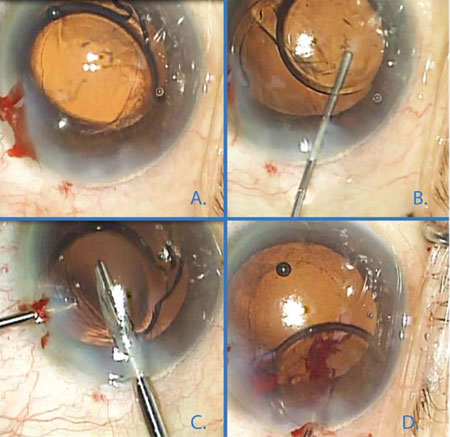 Figure 2. The IOL is descending into the vitreous after insertion (a). Viscoelastic is injected under the optic to bring the IOL up and create a barrier in front of the vitreous (b). The IOL optic is bisected (c), and upon removal bleeding is induced (d).

Lifting and removing the IOL

The chopper was used to bring the IOL up toward the anterior chamber, and viscoelastic was injected under the optic to help support it. The viscoelastic also compartmentalizes the eye and helps prevent vitreous prolapse. The temptation at this point would have been to simply dial the IOL into the ciliary sulcus, but this must be avoided. A single-piece acrylic IOL should not be placed in the sulcus because the thick, non-angulated haptics will eventually induce iris chafing, uveitis, and possibly glaucoma and hyphema.

The lens had to be removed and replaced with a three-piece IOL suited for sulcus placement. Using micro-scissors and forceps, the IOL was grasped and cut to facilitate explantation. The technique that I prefer is to bisect most of the optic and then pull the optic toward the incision and rotate it out of the eye. This allows an IOL with a 6-mm optic to be removed through an incision that is half that size (Figure 2). But in this case, there was another surprise. During IOL explantation, an iris vessel was inadvertently nicked, which induced bleeding. More viscoelastic was injected to push the iris away from the IOL, epinephrine was administered into the anterior chamber to stop bleeding, the incision was enlarged, and the IOL was finally removed.

The eye was carefully examined, and the entire posterior capsule was open. There was not a small rent, but rather a large opening that extended the entire width of the capsule. I can only speculate as to the cause of this capsular break because even watching the video repeatedly did not reveal the exact moment that the capsule ruptured. It seems most logical that the IOL itself may have had a sharp or irregular edge that literally cut the capsule as it was being inserted. And with posterior capsules being less than 10 µm thick, they are very susceptible to damage.

Fortunately, there was just a small amount of prolapsed vitreous in the anterior segment. A 23-gauge bimanual vitrectomy system was used through two limbal paracentesis incisions to remove the prolapsed vitreous (Figure 3) and that last piece of subincisional cortex. A very high cut rate was used with a moderate vacuum level, low flow rate and conservative bottle height. Plenty of time was taken to complete a thorough and gentle anterior vitrectomy with care to avoid vitreous traction. Triamcinolone was used to stain the vitreous to aid in visualization. 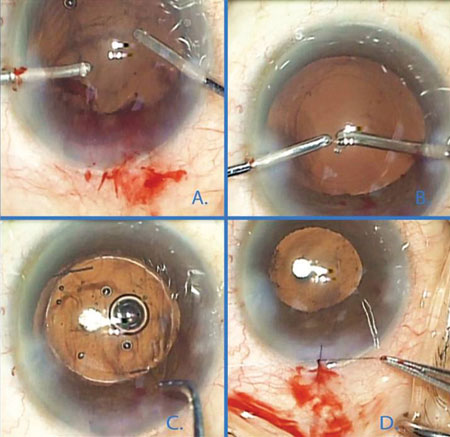 Figure 3. A 23-gauge bimanual vitrectomy system is used to removed prolapsed vitreous and blood (a), resulting in a clean anterior chamber (b). The new three-piece IOL is inserted into the ciliary sulcus with the optic captured through the capsulorrhexis (c). A suture is placed to ensure watertight closure of the main incision (d).

A three-piece IOL was placed in the ciliary sulcus and oriented vertically at the 12 and 6 o’clock meridians in order to achieve a better fit and centration. Using the existing 5-mm capsulorrhexis, the 6-mm optic was captured using a buttonhole technique for maximum long-term stability. The viscoelastic was removed using the bimanual 23-gauge vitrectomy system, and the main incision was closed watertight with a 10-0 nylon suture, which was particularly important in this case. If the incision leaked and the anterior chamber collapsed, the IOL could have become dislodged and more vitreous could have prolapsed forward.

Posterior capsule rupture poses a higher risk of complications such as endophthalmitis, cystoid macular edema and retinal detachment. The patient’s postoperative course was prolonged, but the healing progressed nicely. The extended surgical procedure induced a higher degree of inflammation that required a longer course of postoperative steroids and NSAIDs. Her retina specialist examined her retinal periphery in detail to ensure that the IOL exchange and anterior vitrectomy did not induce a retinal break or detachment. The patient recovered good vision and was very happy.

The important lessons are to be focused and vigilant even during seemingly routine surgeries because complications can present as surprises. In this case, everything looked great until the IOL started sinking into the vitreous. We must always do what is best for the patient in the long term. I am happy that the “shortcut” of simply dialing the existing one-piece IOL into the sulcus was not done. This would have led to future problems and the need for another surgery.

Finally, just because you get one surprise during a surgery, it does not mean that another one will not happen. The ruptured posterior capsule surprised me, and then I did not expect to get iris bleeding during IOL explantation. Relax and take your time to resolve the problems that are encountered. The question I ask myself is, “What would I want done if this were my eye?”

See video of this procedure at video.healio.com/video/Recovery-of-phaco-complication;Ophthalmology.