When lens opacities become advanced, the crystalline lens can take on a white hue that blocks almost all light from entering the eye. These white cataracts cause profound visual loss in patients and prevent ophthalmologists from examining the posterior segment of the eye. White cataracts can be challenging for multiple reasons, and there are different subtypes that should be understood to better overcome obstacles during cataract surgery.

Nuclear density can vary greatly, with some white cataracts being soft, milky and intumescent in nature, while others can be hard and rock-like with a high degree of nuclear sclerosis. The differentiation between a dense white cataract and a soft white cataract is important in devising a surgical plan for phacoemulsification.

Dense white cataracts tend to be in older patients, and on slit lamp examination, there is a yellow to brown hue to the central portion of the crystalline lens. The anterior capsule tends to look relatively flat with no evidence of fluid within the capsular bag. Once the capsule is stained with trypan blue dye, the capsulorrhexis should be fairly routine with little risk of radialization. However, due to the density of the nucleus, a larger degree of ultrasonic phaco energy will likely be required, and the risk of corneal endothelial trauma or even phaco wound burn is higher. For these eyes, recoating the endothelium with a dispersive viscoelastic during phaco and utilizing ultrasonic power modulations can help to lessen the risks.

Soft white cataracts tend to be in younger patients, and there is a milky white fluid within the capsular bag. These white intumescent cataracts pose a challenge during capsulorrhexis creation because the intralenticular pressure increases as the lens cortex liquefies. In a routine cataract, the lens material is solid and the pressure within the capsular bag is lower than the pressure in the anterior chamber, making capsulorrhexis creation straightforward. But in a white intumescent cataract, the liquefied cortex increases the intracapsular pressure and forces the capsular bag to rip uncontrollably once it is opened. With the capsule stained with trypan blue dye, this uncontrolled radialization of the capsule toward the zonules gives the blue-white-blue appearance of the Argentinian flag, which is why this complication is often referred to as the Argentinian flag sign. 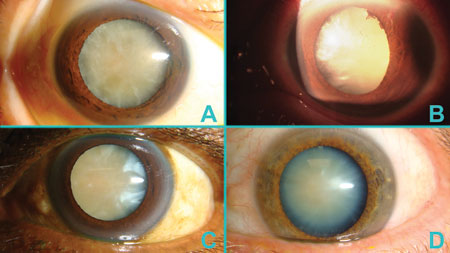 Dense white cataracts. These cataracts exhibit a significant degree of central nuclear opalescence and density with very little of the milky liquid appearance. Note the yellow and brown tones in the lens centrally (a), with cortical changes (b and c). Sometimes the central nucleus is far more opaque than the peripheral area of the lens (d). 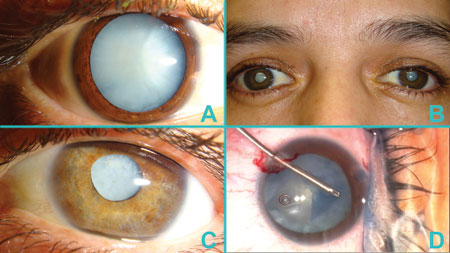 Soft milky white cataracts. These cataracts are filled with liquid and pose additional challenges during surgery. A homogenous milky appearance of the entire lens (a) is more common in younger patients (b) who often present with bilateral cataracts. The lack of any yellow or brown tones in the lens is indicative of less nuclear sclerosis (c). Keeping the anterior chamber pressurized and using microforceps (d) help to minimize complications during capsulorrhexis creation.

The way to avoid the Argentinian flag sign and capsule radialization is to keep the anterior chamber pressure higher than the intralenticular pressure during capsulorrhexis creation. Make just one small paracentesis and stain the capsule with trypan blue dye. Now fill the anterior chamber with a cohesive viscoelastic until the IOP is high (40 mm Hg or more). Now the capsulorrhexis is made only via this small paracentesis using a cystotome needle or small 25-gauge microforceps. Once the rhexis has started, gently rock the nucleus to release any intumescent fluid that may have been trapped between the posterior capsule and lens nucleus. With this technique you can complete a round capsulorrhexis in the majority of these white intumescent cataracts.

Another option would be to make a round opening because it has no corners or weak spots that could radialize in the anterior lens capsule. This can be accomplished by using the phaco probe to punch out a disc from the anterior lens capsule, followed by decompression of the capsular bag, reinflation of the anterior chamber with viscoelastic and then capsulorrhexis creation. Alternatively, a femtosecond laser can be used to make the capsulorrhexis because it would cut the entire capsule opening at once with the anterior chamber pressurized with the suction ring.

White cataracts are surgical challenges, and often they are associated with ocular comorbidities that can further complicate surgery. A traumatic white cataract may be accompanied with zonular loss or weakness. A white cataract that develops in the setting of chronic ocular inflammation can be associated with an irregular capsular contour and contraction. Congenital abnormalities of lens development may be more likely to cause development of early-onset cataracts. 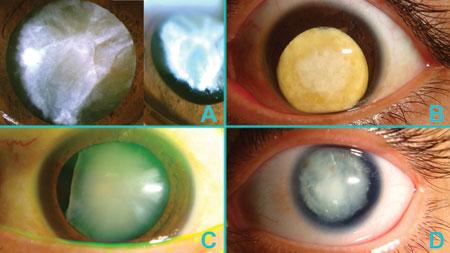 Unusual white cataracts. The irregular contour of the anterior capsule (a) hints at the capsule contraction, zonular weakness and challenges ahead. This traumatic cataract prolapsed into the anterior chamber (b) once the pupil was dilated. Upon detailed examination, the patient (c) is found to have a large sector of congenital zonular absence. Sometimes, white cataracts can be associated with other comorbidities such as this case of aniridia (d).

White cataracts are not all the same, with the principal differentiating factor being the lens nuclear density and the presence of milky fluid within an intumescent capsular bag. Most of the time, careful preoperative examination can identify challenges that we can successfully address during cataract surgery. These patients tend to be among our happiest because they literally can go from blind to clear vision with our surgical techniques.