A study found less pain, fewer complications with the Jacobs cannula compared with a standard cannula.

Local anesthesia for cataract surgery has moved away from retrobulbar and peribulbar blocks. Sub-Tenon’s and topical blocks are becoming more popular.

The sub-Tenon’s cannulas available until now, manufactured by different companies, have all had more or less the same standard shape.

We are introducing a cannula with a different shape that we feel is more suited to a sub-Tenon’s block. The Jacobs cannula is available from Aspen Medical in the U.K. and Aspen Surgical in the U.S.

An audit of sub-Tenon’s block, comparing the Jacobs cannula to the standard cannula, was prospectively carried out between June 2010 and August 2010 on 148 patients. Three consultant anesthetists and three intermediate grade anesthetists took part in the study.

Each patient encounter was recorded on a questionnaire form regarding pain during the injection and the need for a top-up injection; perioperative analgesia efficiency; level of patient satisfaction; akinesis of the globe and eyelid; and complications associated with sub-Tenon’s block. 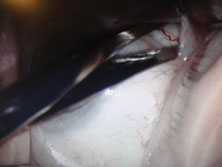 Blunt dissection in the inferonasal quadrant. 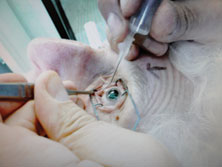 The Jacobs needle is introduced into the sub-Tenon’s space. 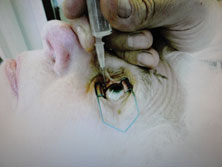 The Jacobs needle in the correct position, where it has engaged properly with the shape of the globe. At this stage, 1 mL of anesthesia is given, and then after a few seconds, another 3 mL is introduced. 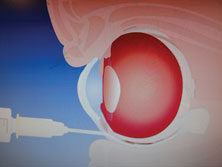 The Jacobs needle engaged in the correct end position.

Sub-Tenon’s block was given by retracting the lids with a speculum and using topical anesthetic drops of benoxinate. (It is an advantage to give the topical drops a few minutes before administering sub-Tenon’s block to avoid patient discomfort. The ideal sequence is to administer topical drops, clean the eye with iodine, wait up to 5 minutes and finally carry out sub-Tenon’s block.) The conjunctiva in the inferonasal quadrant was grasped with non-toothed forceps around 5 mm from the limbus; then a small incision in the conjunctiva was made with spring scissors with some further blunt dissection through the Tenon’s capsule in the inferonasal quadrant. It is important to ensure that the sub-Tenon’s space is reached and that there is no Tenon’s capsule tissue between the cannula and the sclera.

If the needle does not appear to slide easily around to the back of the globe, then it is worth trying another path rather than just forcing the needle and hoping for the best. 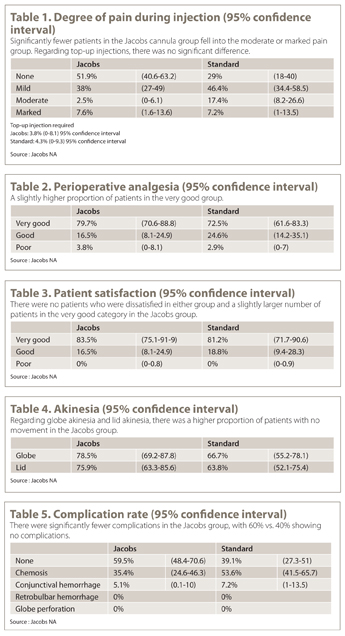 We had no problems with retrobulbar hemorrhage or globe perforation in this study.

The Jacobs needle performed better than the standard cannula in this study. We noted that training junior anesthetists in the sub-Tenon’s technique using the Jacobs cannula was easier because it has a definite endpoint compared with the standard needle, which does not have a well-defined endpoint.