Bilateral anterior uveitis and iris atrophy were observed on examination.

A 68-year-old Caucasian woman was referred to the Lahey Clinic Eye Institute for bilateral light sensitivity and blurry vision associated with redness and pain for 1 week.

She reported a recent diagnosis of pneumonia 1 week before the onset of the ocular symptoms and was treated with a 7-day course of oral Avelox (moxifloxacin, Bayer) and corticosteroids.

The patient’s ocular and medical histories were otherwise unremarkable. She had a family history significant for colon cancer and heart failure, but no ocular diseases.

Anterior segment exam demonstrated mild conjunctival injection diffusely in both eyes. The cornea was clear and compact in both eyes, but 1+ darkly pigmented keratic precipitates were discovered inferiorly in both eyes (Figure 1). There were 4+ fine pigmented cells present in the anterior chamber in both eyes. Pigmented granules were present along the pupillary margin, and transillumination defects and extensive posterior synechiae were found in the mid-peripheral iris (Figures 2 and 3). Gonioscopy demonstrated deep open angles with diffuse pigment deposition in both eyes. There was no peripheral anterior synechiae or concave iris configuration. Posterior segment exam was normal in both eyes. 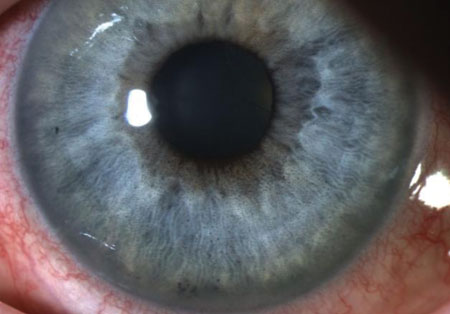 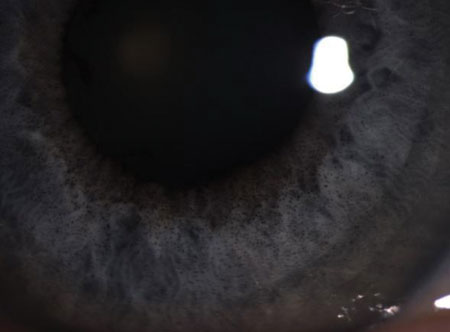 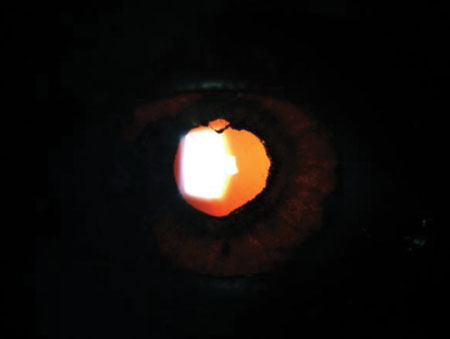 The differential diagnosis for acute anterior uveitis includes inflammatory disorders such as HLA-B27-associated anterior uveitis with or without associated ankylosing spondylitis, inflammatory bowel diseases or psoriatic arthritis (commonly bilateral but alternating and non-simultaneous), sarcoidosis, Vogt-Koyanagi-Harada syndrome, and Behçet’s disease. Juvenile idiopathic arthritis is a common cause of anterior uveitis in the pediatric population, but the onset is typically insidious with a chronic course. Infectious etiologies such as herpetic eye disease (characteristically unilateral), syphilis, tuberculosis and Lyme disease should also be considered. Uveitis associated with systemic medications has been reported with rifabutin, cidofovir, sulfonamides, pamidronate and more recently with fluoroquinolone antibiotics. Tumors (eg, retinoblastoma, lymphoma, iris melanoma and metastasis) can also mimic anterior uveitis. Iris depigmentation and atrophy are seen in pigment dispersion syndrome and after radiation treatment but are not commonly associated with intraocular inflammation. Fuchs’ heterochromic iridocyclitis can present with a mild anterior chamber reaction and cause diffuse iris atrophy. However, it is usually unilateral and almost never associated with posterior synechiae or iris transillumination defects.

Fluoroquinolone-associated uveitis is a clinical diagnosis, and a complete uveitic review of symptoms should be obtained to rule out other potential etiologies. Further workup, including laboratory testing, should be pursued in cases in which the diagnosis is questionable. Treatment consists of topical steroid and cycloplegic agents.  IOP-lowering medication may also be indicated. Patients should be monitored closely to assess treatment response.

Based on the specific clinical history and exam findings for our patient, an anterior chamber paracentesis was performed. PCR testing of this fluid was negative for herpes simplex virus. Her ACE and lysozyme levels were within normal limits. Treponemal testing and Lyme antibody testing were nonreactive. During our examination, 10% phenylephrine was utilized to help break the posterior synechiae. The patient was initially treated with Pred Forte drops (prednisolone acetate ophthalmic suspension, Allergan) every hour, Cyclogyl drops (cyclopentolate hydrochloride ophthalmic solution, Alcon) three times a day and Combigan drops (brimonidine tartrate 0.2%/timolol maleate ophthalmic solution 0.5%, Allergan) two times a day. She was followed closely and showed marked improvement. There was decreased anterior segment pigment and inflammation over the course of several weeks. She also retained excellent vision, and her IOP normalized.

Fluoroquinolone-associated uveitis is a known but relatively rare clinical entity. Recently, 40 case reports were reviewed. Nineteen cases (48%) were bilateral; most of these cases were noted to have transillumination defects, atonic pupils and findings of pigment dispersion. Twenty-five cases (63%) were associated with oral moxifloxacin treatment. The median time range from start of fluoroquinolone use to the onset of uveitis was 13 days (range: 0 to 20 days). Among tested individuals, HLA-B51 haplotype and HLA-B27 haplotype were present in 40% and 20%, respectively. This is suggestive of a genetic predisposition.

The mechanism for uveitis is currently unknown. Oral moxifloxacin readily crosses the blood ocular barrier in non-inflamed eyes and reaches the minimum inhibitory concentration (MIC90) within 4 hours. Known ocular side effects of orally administered fluoroquinolones include diplopia, blurred vision and color distortion. Intravitreal moxifloxacin is currently under investigation, and currently there have been no reports of uveitis.