This report emphasizes the importance of a complete ophthalmoscopic examination in all patients who present with corneal foreign bodies. Grinding metal results in metallic particles flying off in all directions at very high rates of speed. Occasionally these foreign bodies can hit the eye with enough force to cause a full-thickness laceration. A careful and thorough exam should be done on all patients, and they should be dilated to ensure that there is no peripheral pathology. It is not enough to simply remove a corneal foreign body, because a potential intraocular foreign body may be missed.

A 35-year-old male patient was referred to the eye clinic with a corneal foreign body. He worked as an auto mechanic, and while working, he felt something hit his eye. He was seen at the emergency department with bilateral eye pain, irritation, redness and tearing. He admitted to not wearing his safety glasses at times and further confirmed previous episodes of corneal foreign bodies that required removal by multiple other ophthalmologists. The most recent episode was 1 month ago.

On examination, the patient’s best corrected visual acuity was 20/30-1 in the right eye and 20/25+1 in the left eye. His IOP, pupil exam and extraocular muscle movements were normal. Confrontation visual field testing was full in the right eye but limited superiorly in the left eye. Anterior segment examination of the right eye revealed diffuse 2+ injection, a metallic foreign body at 3 o’clock near the limbus that was removed, a residual rust ring that was burred and multiple anterior stromal scars. Examination of the left eye revealed trace injection with a smaller metallic foreign body at 4 o’clock that was removed and a residual rust ring that was burred. Closer examination of the left eye revealed a linear scar at 3 o’clock that appeared to be full thickness through the cornea (Figure 1a) with an iris defect underlying the corneal scar (Figure 1b). 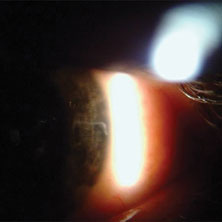 Figure 1a. A linear scar at 3 o’clock appears to be full thickness through the cornea in the left eye. 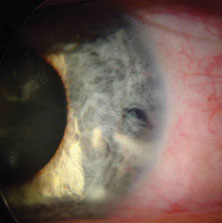 Figure 1b. An iris defect underlying the corneal scar in the left eye.

The patient stated that he had never been dilated during his previous foreign body removals. He related an episode approximately a year ago in which he was hit in the left eye with significant force while grinding brakes. He further admitted to a decline in his night vision and peripheral vision in the left eye since that episode and prior to his current injury.

After dilation, the patient was noted to have a polychromatic cataract in the left eye with vacuoles along the posterior capsule in the nasal portion of the lens. He had a retroillumination defect at the site of the previously noted iris defect (Figure 2). Dilated examination of the right eye was normal (Figure 3). Dilated examination of the left eye revealed 1+ vitreous haze, retinal pigment epithelial changes inferiorly, sclerotic vessels inferiorly and an approximately 1-cm foreign body in the vitreous cavity resting on the retina inferiorly (Figures 4 and 5). The retina was atrophic and pigmented around the foreign body site.

Figure 2. Retroillumination defect at the site of previously noted iris defect in the left eye. 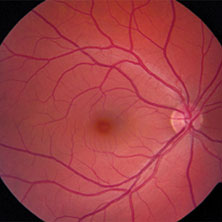 Figure 3. Dilated examination of the right eye was normal. 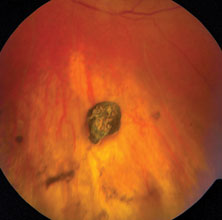 The patient underwent uncomplicated pars plana vitrectomy (PPV) with removal of the intraocular foreign body. His postoperative course was uncomplicated without change in his symptoms.

Figure 6. Visual field in the left eye showed severe generalized constriction with near wipeout of the superior visual field.

Intraocular foreign bodies containing iron that are retained for an extended period of time can result in significant ocular toxicity, especially to the retina, resulting in a slowly progressive retinal degeneration with progressive vision loss and eventual blindness. Iron toxicity, or siderosis bulbi, of the eye is characterized by iris heterochromia, pupillary mydriasis, cataract formation, lens dislocation, retinal degeneration and secondary glaucoma. The tissues involved are all of epidermal or neuroectodermal origin because this is where the iron tends to deposit intracellularly.

Iron toxicity leads to dysfunction of all layers of the retina. Initially the ERG may show an increased A-wave, but there is eventually a generalized reduction of the amplitude of the ERG waveform. This reduction may be reversible in early parts of the disease, but as the siderosis progresses, the ERG will eventually be permanently extinguished.